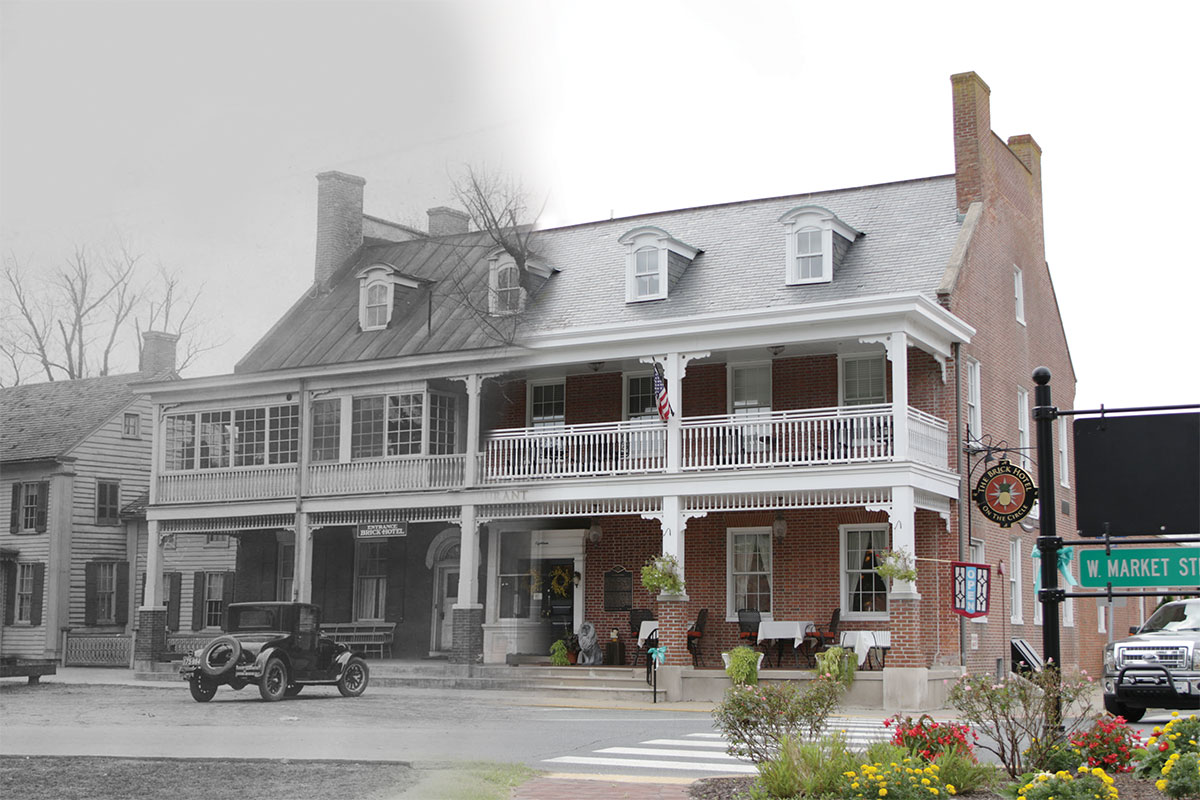 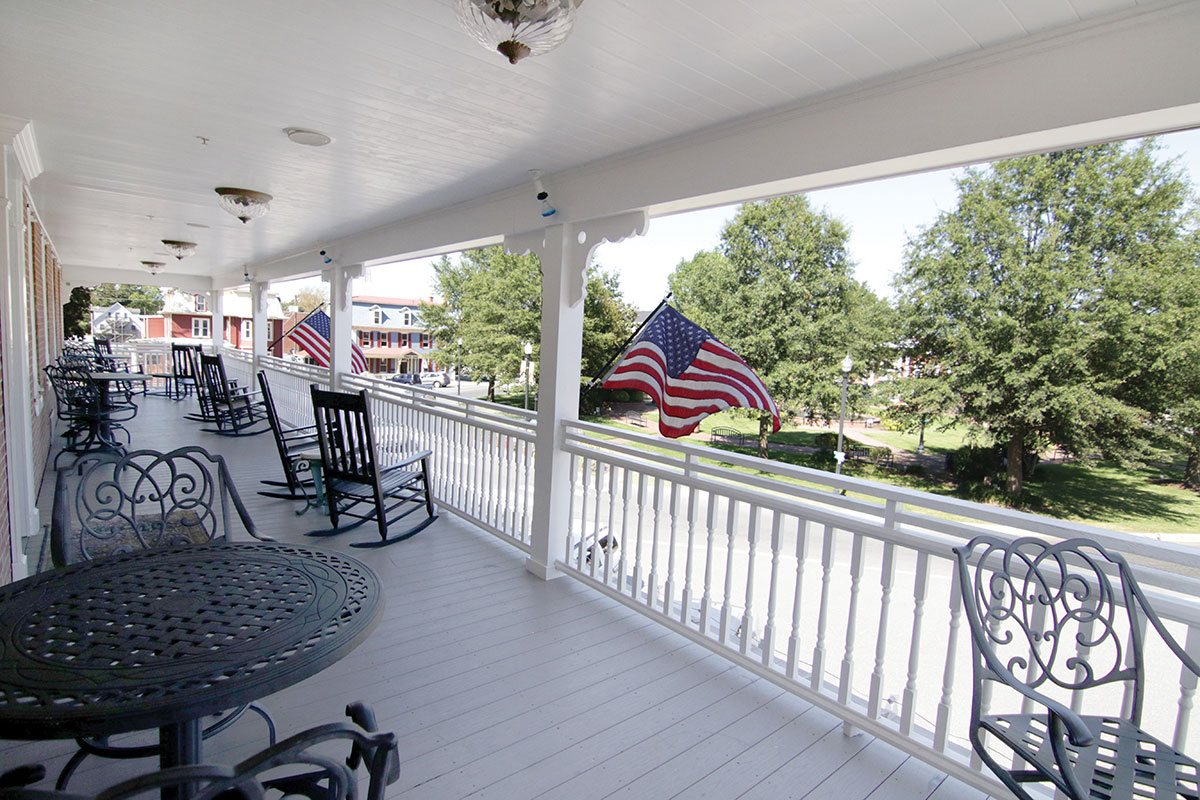 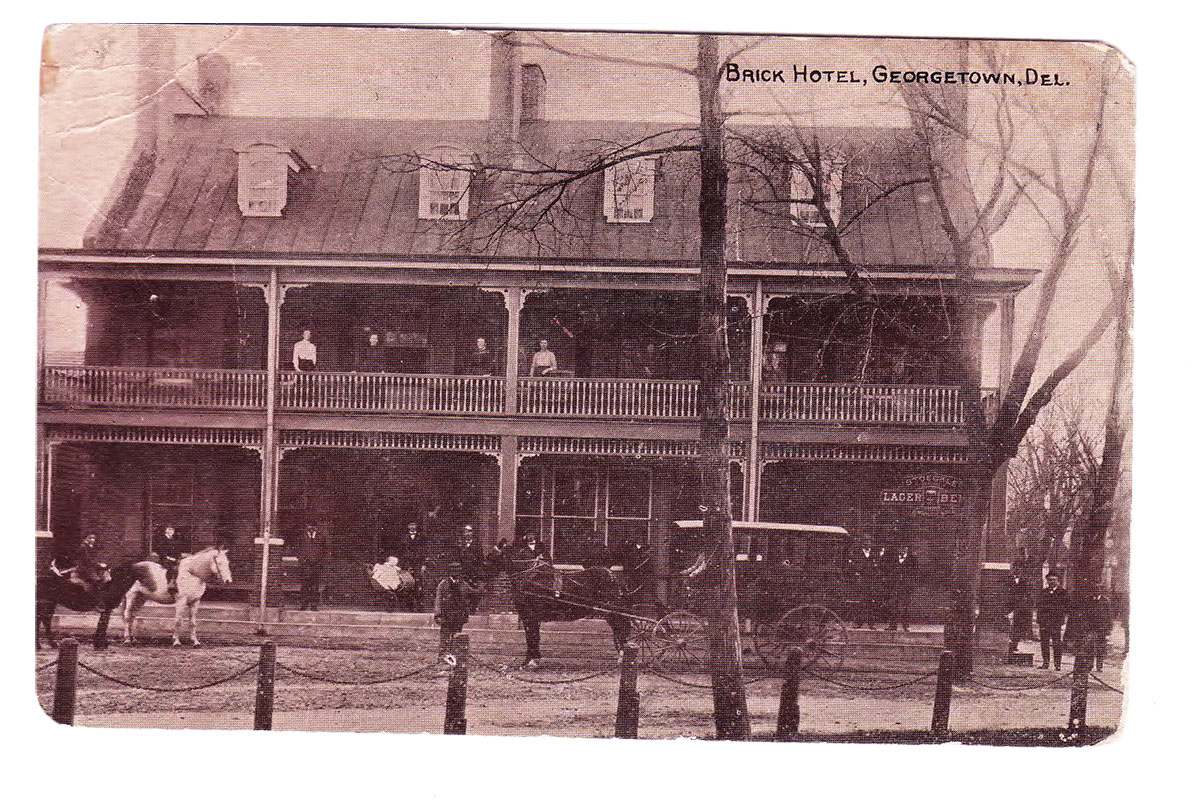 Joshua S. Layton and Caleb B. Sipple — perhaps as much as any two people in history — could claim that they helped build Georgetown from the ground up.

In 1836, the builders replaced a frame public house with a new inn and tavern, and from 1837 to 1839, Layton and Sipple built a new Sussex County Courthouse. That inn and tavern, according to Delaware Public Archives, hosted Sussex County court business until the construction of the new courthouse was finished.

And even after a series of incarnations, reclamations and renovations, the inn still stands in the same footprint it resided in when Layton and Sipple completed construction, and it is very much in operation today — as the Brick Hotel.

The Brick became a popular spot for both locals and visitors, and was a well-known gathering place for Northern sympathizers during the Civil War. It was actually known as the “Union Hotel” for a while, according to Thomas J. Ryan, a Civil War historian.

“That distinguished it from the Eagle Hotel, located on the other side of The Circle, where Southern-leaning clientele congregated,” Ryan wrote in a 2016 Coastal Point article. “Emblematic of the national unrest, legend holds that drunken brawls involving the hotels’ respective patrons occurred in the center of town.”

The Brick continued on as a successful and prominent part of Georgetown until 1950, when it was purchased by the Wilmington Trust Company, and subsequently remodeled to serve as a bank. In the 1990s, the State of Delaware purchased the property and planned to tear it down to build a parking lot or courthouse.

“The townspeople went crazy,” said Lynn Lester, who now owns the Brick, along with her husband, Ed. “There was a big ‘Save the Brick’ campaign and, ultimately, it actually took legislation to have [the plans] overturned.”

Lester said there was a land-swap between the State and a property-owner in town, and the Lesters bought the Brick from that individual in 2006.

The Lesters own Lester Realty in Georgetown, and Lynn Lester was CFO of a school district in the state before retiring in 2006, so they knew a little about finance and property acquisitions. It was a perfect match.

“We had no idea what we were going to do with it,” said Lynn Lester, laughing at the memory. “I had to do something [after retiring], so I talked with a lot of economic-development people and visited with some of the bigger companies in town. … I felt there was in fact a need for dining and lodging in Georgetown and, ultimately, that’s what we did. Ed — and his professional background — wanted to turn it into a corporate center.

“So, I won that battle,” added Lynn Lester with another laugh.

The couple decided they wanted to restore the Brick to its roots. They had visions of it becoming a “meeting place” and focused on restoring the inn to feature 14 rooms and offer a full-service restaurant.

The Brick is on the National Register of Historic Places, so there were some limitations as to what they could do, but they painted and restored what they could, and put back up the second-story veranda, which had been removed when the bank owned the building. It was a significant project — one they started in January 2008.

“And the economy tanked in March,” said Lester. “So, needless to say, those first few years were a little challenging; but we survived and have been going full-force since then. We’ve been very fortunate to see growth — both in the inn and the restaurant.”

a uniquely-Delaware tradition in which political candidates come to Georgetown following the election to ceremonially and literally “bury the hatchet.” The Brick closes down to the public on Return Day for private parties, but they do sell a limited number of passes to the front porch.

The Brick is also becoming known for wedding services. Lester has officiated wedding ceremonies for three-and-a-half years, and people can have their wedding parties and ceremonies all at the Brick. She estimated that she has officiated between 125 and 150 weddings.

The Lesters have a front-row view of much of what goes on in downtown Georgetown, and Lynn Lester said they serve as a pseudo-tourist center, with people who get lost or turned around downtown coming in for directions. And she’s watched some change during her time in town.

“We’ve seen a lot of positive change [in Georgetown] over the last few years,” said Lester. “I attribute a lot of that to the mayor and current council. And we’ve seen growth with the medical facilities and restaurants and the Microtel out on the highway.”

But, at its core, Lester said she sees Georgetown as a Rockwellian destination.

“Look at Georgetown as a quaint, historic getaway,” she urged. “Georgetown offers a quieter, more peaceful getaway for people, and certainly, staying at the Brick Hotel can enhance that.” v