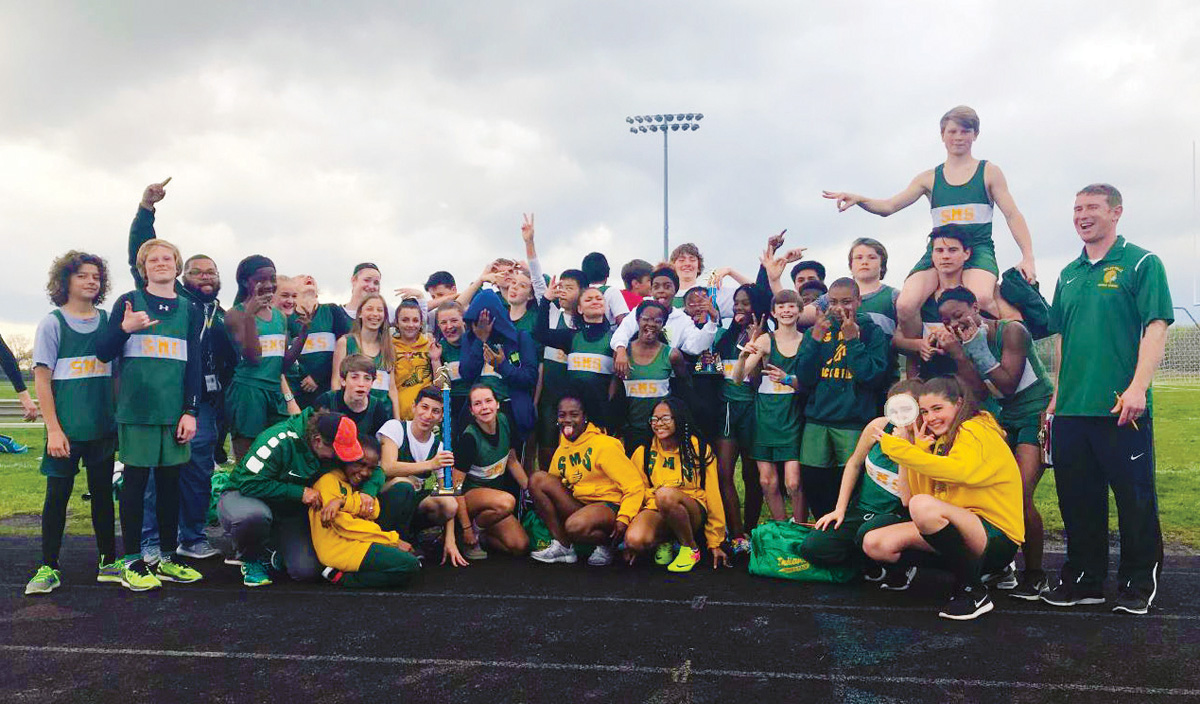 Three words that can often describe the student-athletes at Selbyville Middle School, which, coincidentally, is known as SMS.

The school’s boys’ and girls’ track teams each recently won their district track meets against Georgetown and Millsboro. The boys won with a score of 82, while the girls earned 84.5 points.

“I want to begin by saying how much of a pleasure it was to coach this group of athletes,” head coach Brian Benner said. “Our athletes´ accomplishments on the track this year were nothing short of impressive. At some point during the season, almost all of our athletes achieved their personal best results.

“Even more impressive to me was our athletes’ positive character and sportsmanship off the track. In this category, our team was truly unmatched. I was always proud to host and to take them to track meets, knowing they would represent Selbyville Middle School well, no matter what happened on the track.”

Bennet White won the 1,600m, and finished second in the 800m, while Chris Sichina won the 800m. Evan Peterson and Jeremiah Dennis finish second and third, respectively, in the 55m hurdles. Alonti Oliver was third in the 100m and 200m.

SMS swept the triple jump, with Hayden Hall taking first, followed by Engel, then Caleb Galbreath. Hayden Hall also won the high jump, while Dalton Hall and T.J. Burke finished 1-2 in the shot put. Hall and Burke were joined by Tyler Corcoran to sweep the discus event for SMS.

“Our track team did have had strong advantage,” Benner added. “Heather Goodrich and John Zirckel brought many years of coaching experience to our team. The time and effort they put in to help these athletes was truly a gift for our athletes. Coach Harris and myself are very fortunate and appreciative for their dedication and involvement.”

On the girls’ side, Alexis Pszcola was second in the 55m hurdles, while Parvas Goodman-Baker was third. Aniyah Blake took first in the 100m and 200m. In the 800m and 1,600m, Devin Hundley and Isabella Scharp finished first and second, respectively.

The team of Pszcola, Tonia Perkins, Gabby Mills and Saige Dismuke took first in the 4-by-100. Pszcola, Mills, Dismuke, and Blake teamed up to win the 4-by-200 event. Paige Psaroudakis finished second in the 400m.

In the long jump, Saniya Lewis, Laniya Lewis and Hundley swept for SMS. Both Lewises were joined by Mya McDonald to go 1-2-3 in the triple jump. Laniya Lewis won the high jump, while Morgan Freund topped out in the discus. Freund was second in the shot put, and was followed by Scarlet Dunn for third.

“Another advantage we had was the ability to work with athletes from other SMS spring sport teams,” Benner concluded. “On occasion, athletes from girls’ soccer, softball and baseball would train and compete with our track team.

“It was remarkable to see these multi-disciplinary athletes merge with our core track team and be able to showcase their talents. I credit this opportunity to our coaching staff at SMS and their flexibility. Thank you to Coach Barch, Coach Bare and Coach Clausen.”