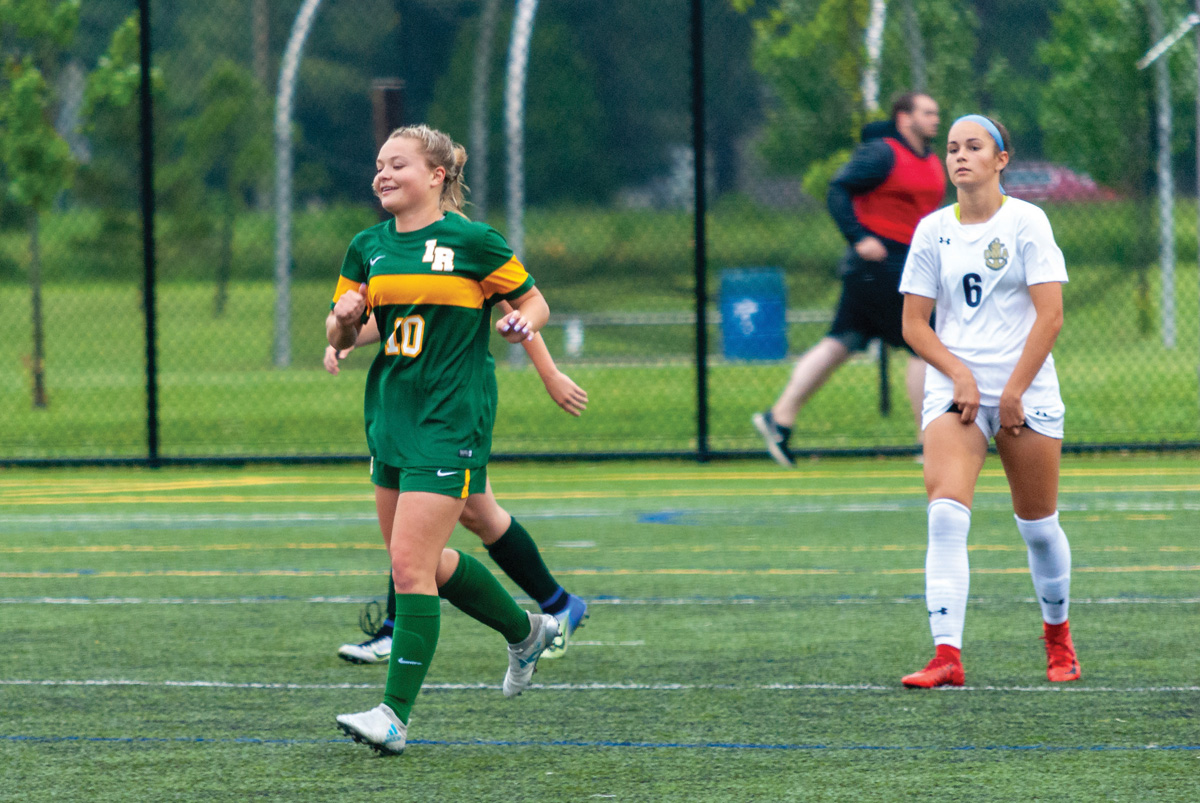 Indians’ soccer knocked out of playoffs by champs DMA

The Indian River High School girls’ soccer team certainly earned everything they got this season.

In fact, the Indians battled, scratched and clawed their way through an unusually chilly, rainy late May evening against the Seahawks, to a scoreless tie through the first 40 minutes of action. Despite that effort, the Seahawks responded in a big way after the intermission and wound up winning convincingly, 4-0 over the Indians.

At the 41:30 mark of the game — just 90 seconds into the second half, on a set corner-kick play — Elise Buonopane took a pass from teammate A.K. Hughes and drilled a shot passed IR goalie Fabrea McCray into the lower right corner for a 1-0 lead.

Not even five minutes later, IR’s Sia Diakos took a pass from Izzy Binko and nearly tied the game. However, DMA goalie Julia Emerich somehow was able to corral Diakos’ shot before it crossed into the goal to thwart the tying opportunity.

“That would have been huge, to get it tied up, and, unfortunately, that didn’t happen,” IR veteran coach Steve Kilby said after the game. “I’m not quite sure how their keeper caught that, because [Sia] crushed it, and the keeper caught it from 4 yards away. So that was the difference to me in being 1-1.”

And it was almost as if in that moment, any momentum the Indians had picked up quickly blew away with the wind. DMA would go back down the field and generate a free-kick opportunity from about 20 yards out, with Buonopane again doing the damage to make it 2-0 at the 47:00 mark.

“We trained specifically on making sure we didn’t allow them to run free, and we did a really good job of that in the first half,” Kilby noted of his squad’s first-half effort. “Unfortunately, they scored their goals on set plays. Our lack of urgency on defending set pieces ended up being the difference, and then, from there, the game was kind of broke.”

Buonopane figured into the scoring of DMA’s last two goals, assisting on Alyssa Ruggieri’s goal at 61:00 before helping on Melayna Immediato’s marker at 65:00.

DMA outshot the Indians 12-5 and held a 6-2 advantage in corner-kick opportunities on the night.

Emerich finished with five saves for the Seahawks, while IR senior Fabrea McCray made seven stops.

“The future is really bright,” Kilby concluded of his team. “We’ve got two huge players to replace in Fabrea, our goalkeeper, and Sammi Whelen — she really makes us go. We have people scoring goals, but it’s because she’s doing all the work behind them getting them in. So the future is bright, but right now it’s a little bit dark.”

Free kicks: Indian River won’t have to wait long for a chance at redemption after a look at the preliminary schedule for 2019 shows the Indians facing the Seahawks in their first game of the 2019 season. The Indians finished their 2018 campaign with an 11-6 overall mark. DMA went on to defeat Tower Hill in the state championship final, 1-0, to finish their season at 15-2-1.