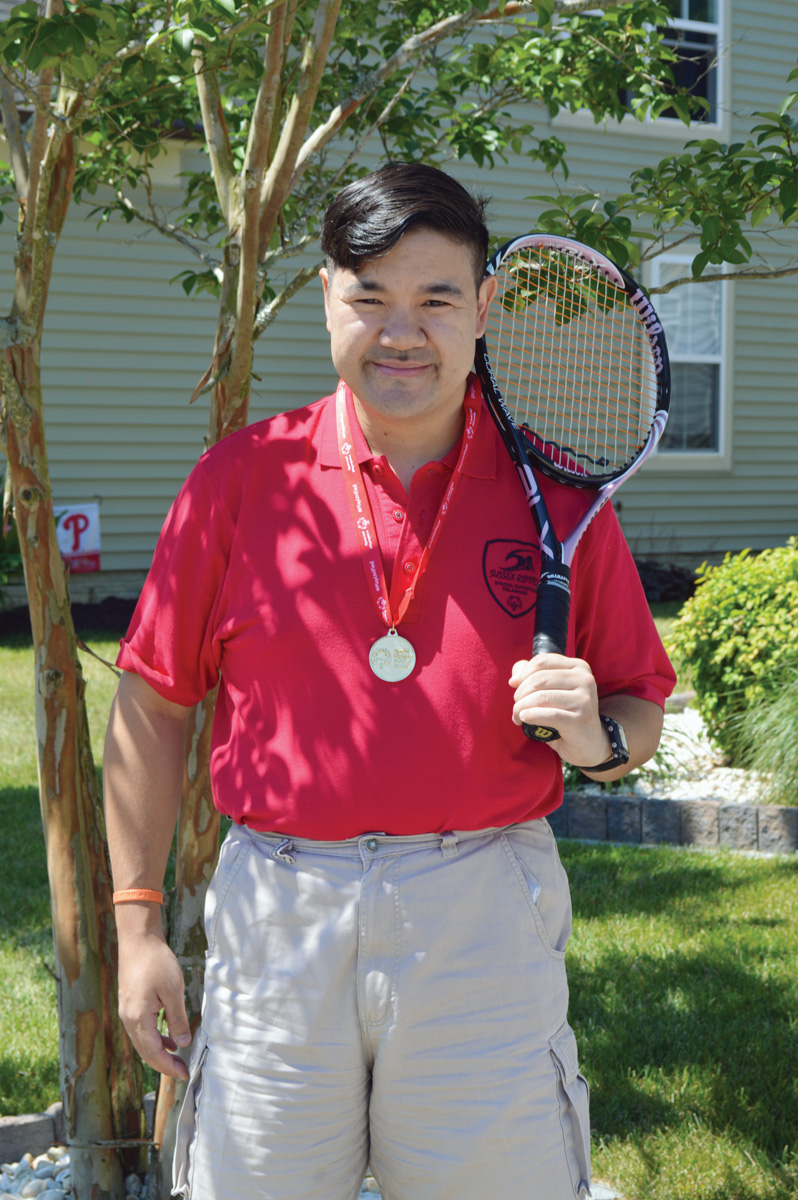 Enjoyed by millions of people as a leisure activity, tennis can be a lifetime sport for Special Olympics athletes.

More than 37,000 of the athletes participate worldwide, and can delight in and benefit from the sport even when not competing in an official Special Olympics competition. Tennis is a spring sport, with the skills competition and tournament taking place at the Special Olympics’ Summer Games.

One local competitor stood high above them all in the most recent Summer Games tournament. That competitor was Ocean View’s own R.J. Franco.

Franco took home a gold medal in the singles competition, while also winning a bronze in the unified doubles tournament with his partner, Tony Gough. The unified doubles event features a Special Olympian paired up with a peer without a disability.

“He likes winning,” said R.J.’s mother, Carmelita Franco, with a laugh. “He gets to practice one time a week with other Special Olympians at Sea Colony. Sometimes he will go over to the courts with his father and play here in our development.”

Carmelita and her husband, Bobby, have supported their son’s love of the sport for the past 17 years. The family had originally lived in northern Delaware near Hockessin, but there wasn’t really anywhere for R.J. to play year-round.

“We struggled to find him a place to play in the winter,” Carmelita said. “We moved down here in 2014, and have loved the move. R.J. gets to play a lot more now, and all year long.”

The 33-year-old not only loves playing tennis, he also enjoys playing on his computer and watching “Jeopardy” with his parents. And his troubles with verbal communication certainly don’t hinder his ability to focus on the court.

R.J. is coached at Sea Colony by Marie MacIntosh. She has been instrumental in R.J.’s development on the court, his parents said.

“We would love to extend our sincerest appreciation and gratitude for all that Marie does as R.J.’s coach,” said Carmelita. “She has shown R.J. so much support and inspiration. She has made all this possible for him all these years.”

The Summer Olympics competition allowed athletes to participate in singles, doubles, Unified doubles or the individual skills competition. All matches took place on the University of Delaware’s outdoor tennis courts.

The Special Olympics movement, the organization says, “unlocks the joy of sport to inspire people to open their minds to human giftedness, to accept, include and value people with intellectual disabilities in all aspects of life, and thereby unite people in a shared belief of a more just and welcoming world.”

Special Olympics Delaware provides year-round sports training and athletic competition in a variety of Olympic-type sports for more than 4,200 children and adults with intellectual disabilities. They give those individuals continuous opportunities “to develop physical fitness, demonstrate courage, experience joy and participate in a sharing of gifts, skills and friendship with their families, other Special Olympics athletes and the community.”