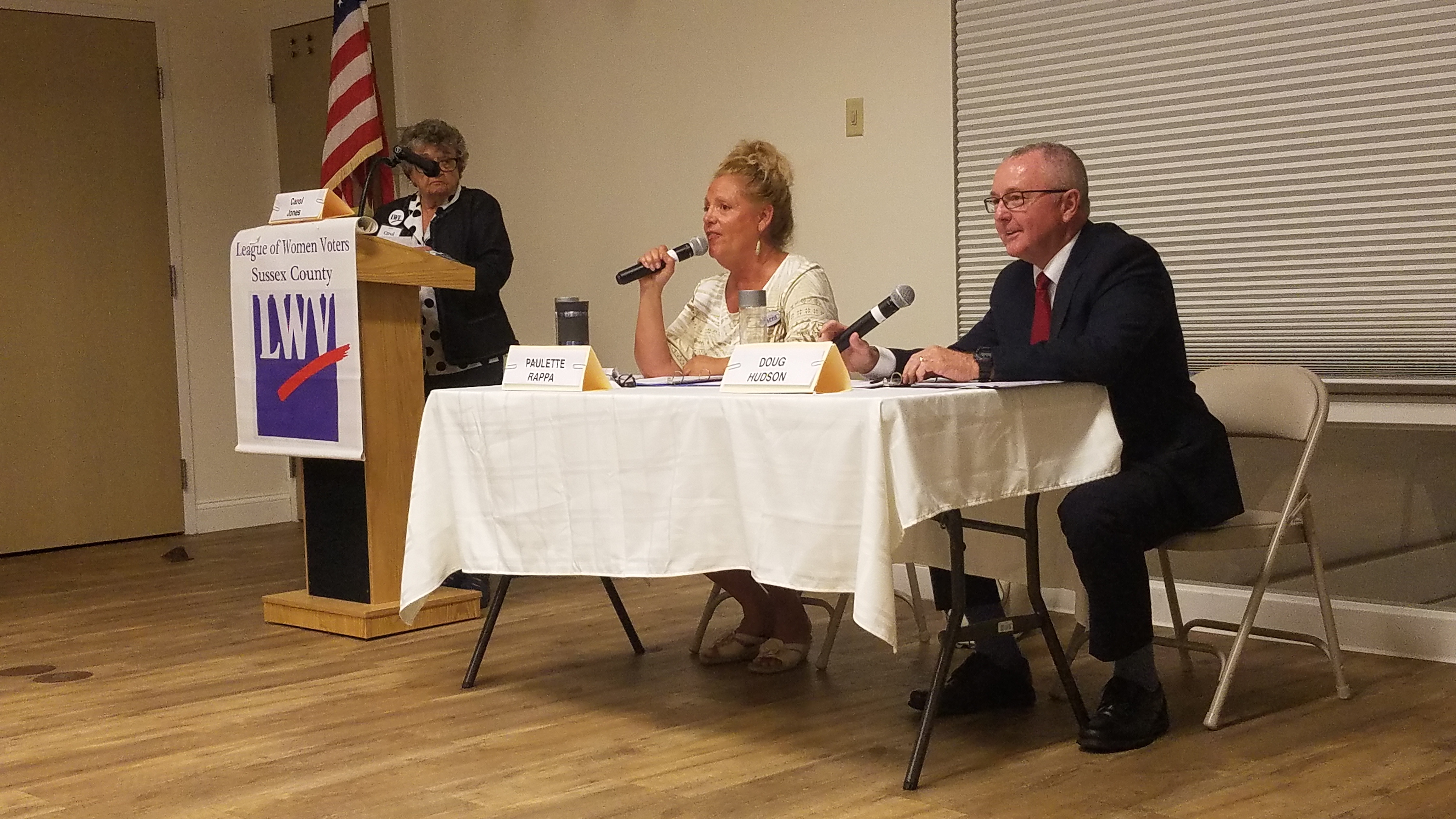 With the 2018 elections ramping up, the public is learning more about local candidates, thanks to the League of Women Voters of Sussex County.

Delaware elections will be Tuesday, Nov. 6.

“Remember that a democracy is not a spectator sport. See you in November!” moderator and LWV state board member Carol Jones told the audience.

Hudson described his experience as a lifetime Delawarean, a state police trooper and a Sussex County Planning & Zoning Commission member during the revision of the County’s Comprehensive Plan.

“The opportunities I’ve had to serve the State and County have allowed me to give back to my community and have prepared me well for a seat on the county council. I bring transparency, honesty and common sense to the table,” said Hudson, adding that because he’s retired, “I can be your fulltime county councilperson.”

“There’s no doubt Sussex County needs strong voice. …  Do you want the same group of people making the same decisions and resulting in the same mess?” Rappa said. As testament to the work she could do for Sussex, she noted that as the director of a nonprofit, she recently won a $500,000 grant for The Way Home’s reentry program.

And it’s time for women to serve, Rappa said, emphasizing the lack of diversity on a county council that has only had one woman elected to a council seat in 300 years.

“I know this county inside and out,” Hudson said. “With my experience and my knowledge of the people, I would be a great asset to county council. And I would love to represent you.”

What can the county do about the problem of sea-level rise?

“I don’t know that I’m going do a whole lot about sea-level rise at all,” said Hudson, although he said he thinks it important to monitor the situation. “You’ve got to remember it is a choice to live by the water, but I think that it’s a personal choice. The federal government just did a revision of the floodplains. … I just don’t think as a county councilperson there’s a whole lot you’re going to do.”

“The first thing I think county council has to do is acknowledge there is a sea-level rise,” said Rappa, a Long Neck resident. “In about 25 years, if it continues … I will have waterfront property, and I don’t live anywhere close to the water.” She encouraged coordination with the state and federal government, plus researching mitigation strategies from other countries.

“But first we have to acknowledge it exists, because it will put in place a loss of property and a loss of life.”

Both candidates said they support environmental buffers — in particular, as regards the recent debate over increasing mandatory buffers between development and waterways — although Rappa emphasized the environmental need, while Hudson said he wanted a more deliberate process and cautioned against blanket rules for the entire county.

How can environmental concerns and property rights be balanced? It’s a delicate balance, said Hudson, adding that he “100 percent” stands behind property rights, but recognizes people must also be good neighbors and stewards of the land. Rappa agreed that property rights are critical, but noted the negative impacts of building too close to environmentally-sensitive areas, which themselves contribute to the local economy.

On the subject of the explosion of development around Long Neck, the forum audience asked for solutions to managing traffic, infrastructure and emergency services.

Rappa indicated she was unimpressed with the seeming lack of moderation. Buffer changes were recommended in 2008 but are just now being discussed. There are countless permits in the pipeline, based on older regulations, for which people haven’t yet seen the impact.

Her suggested solution was a “hometown overlay,” like a community-based P&Z commission for unincorporated zones, such as Long Neck and Oak Orchard, which otherwise rely on County zoning regulations. It would supersede County zoning and give local communities more power to plan and regulate, she said.

Hudson said he didn’t think it feasible for unincorporated communities have separate rules from the County. To control zoning, neighborhoods should instead write a charter and incorporate as a town, he said.

The candidates were asked to share the most important changes they feel Sussex County needs.

“We need to control development, but you can’t stop development. Growth is part of Sussex County,” Hudson said, adding that he also supports expanding the public drinking-water systems.

Both discussed options for ensuring that comp-plan recommendations are actually carried through. They also agreed to balance the budget without raising taxes — citing the County’s current comfortable financial position.

Neither said they believed in reassessing Sussex County property values, which have not changed since the 1970s.

“It is too costly as this point,” said Rappa. “It could hurt a lot of people in the process. So we have to be more creative in terms of how we can find other revenue streams to function in this county.”

“It’s going to cost about $10 million to do an assessment, and then your property taxes are going to go up 400 percent,” Hudson asserted, but people move to the area for the low taxes. “The County is very, very good financially right now, so I see no reason to do a reassessment.”

“I sometimes struggle with government getting involved with telling someone they have to have a certain piece of land designated for affordable housing,” Hudson said.

As for requiring developers to pay more money toward infrastructure improvements, Hudson said they do, based on State requirements for road improvements, but he said he wasn’t sure the County can arbitrarily demand more fees, but must justify any increases. However, Rappa said that with the explosive growth, developers are not paying to the extent they can.

They also touched on the water contamination in privately-owned wells around Millsboro. Both agreed that Sussex County, or the private water suppliers, need to expand water districts, just as Sussex County is doing with public sewer. They also pointed to the lack of disclosure of well contamination during real estate transactions.

Both agreed that Sussex County needs to spotlight public health, but not necessarily by having a formal health department.

“The State does a really good job with the health department. I think that we could help them expand and work with them a little better,” said Hudson, adding that Sussex is attractive for its low tax rate, which he said would disappear with more services.

Rappa suggested that Sussex County form an advisory committee for public health and then research similar models in other towns and counties. She also pointed to the seemingly high cancer rate in the Millsboro area.

Rappa said that manufacturing is being replaced by technology- and service-based jobs, so the county needs an educated workforce to attract those businesses. Sussex should evaluate the local needs, including medicine, an aging population and agriculture, she said.

Hudson disagreed, saying he believes that manufacturing will make a comeback, so Sussex has to be economical for those businesses. Sussex can entice those industries with high-speed internet, railroads and industrial parks, he said.

Both agreed with the idea of having master-planned areas. But they hesitated around the idea of mandating that developers build neighborhood roads to DelDOT standards. Prices would be higher for buyers in such communities, Hudson said, although Rappa noted that the cost of repairing substandard roads would be higher later.

Upon hearing that Ocean City, Md., has invested in solar power, Hudson said alternative power is great but should be managed by a private entity, while Rappa said she would consider exploring clean power to save money.