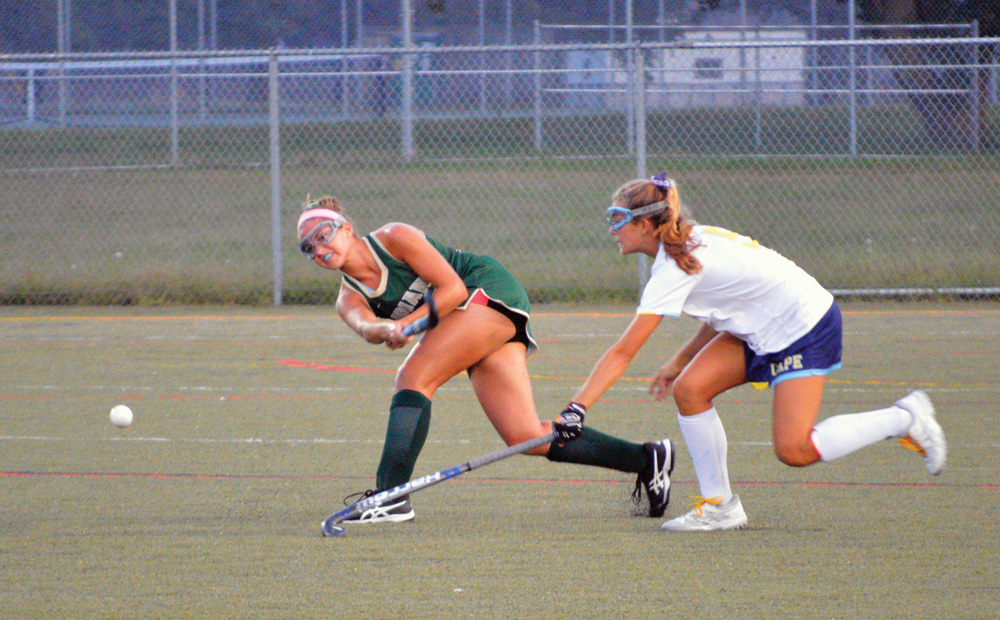 Another Henlopen Conference matchup on the road for the Indian River field hockey team had the locals on the stadium turf at Lake Forest on Tuesday, Oct. 16.

A game on turf is a different from one played on natural grass. The speed of the game, and the way the ball bounces — or doesn’t — is all different on the two surfaces. A team that plays on the artificial surface regularly is at a decided advantage.

The Spartans utilized their advantages on Oct. 16 to defeat the Indians, 3-1. It was the third straight loss for IR as they head into the final two weeks of the season.

“Turf is entirely different,” head coach Jodi Stone had said after the Indians’ game back on Oct. 9. “It’s a different game — clearly, the speed and the way the ball moves. Our girls played hard, and continue to put in the necessary work to get better each time out.”

Lake Forest got on the board in the first half at the 3:01 mark, when Grace Aguilar found the back of the cage unassisted for the initial 1-0 lead.

It remained that way well into the second half, before Lake put two more across the goal mouth, as Aguilar picked up her second with an assist from Riley Wood this time. Hailey Moore took a pass from Maycee Collison for the third goal of the night for the Spartans.

Avery Congleton erased the potential shutout with just under a minute to go in the game, when she connected with Jessica Rybicki for the Indians’ lone goal.

Lake Forest was credited with 10 shots in the contest, while Indian River managed to get five. The Spartans added nine penalty corners to their offensive ledger, with the Indians working their way to two.

Goalie Allyson Clark made eight saves for IR, which saw its record fall to 6-4 on the season. The win improved the Spartans’ mark to 7-2-1.

It has been a difficult three game stretch for the Indians, who were looking to get back on the winning side of things as they returned home to face Milford (3-7 on the season) on Thursday, Oct. 18. Results of the game will be posted on the Coastal Point sports Facebook page, as the game was played after the Coastal Point press time.