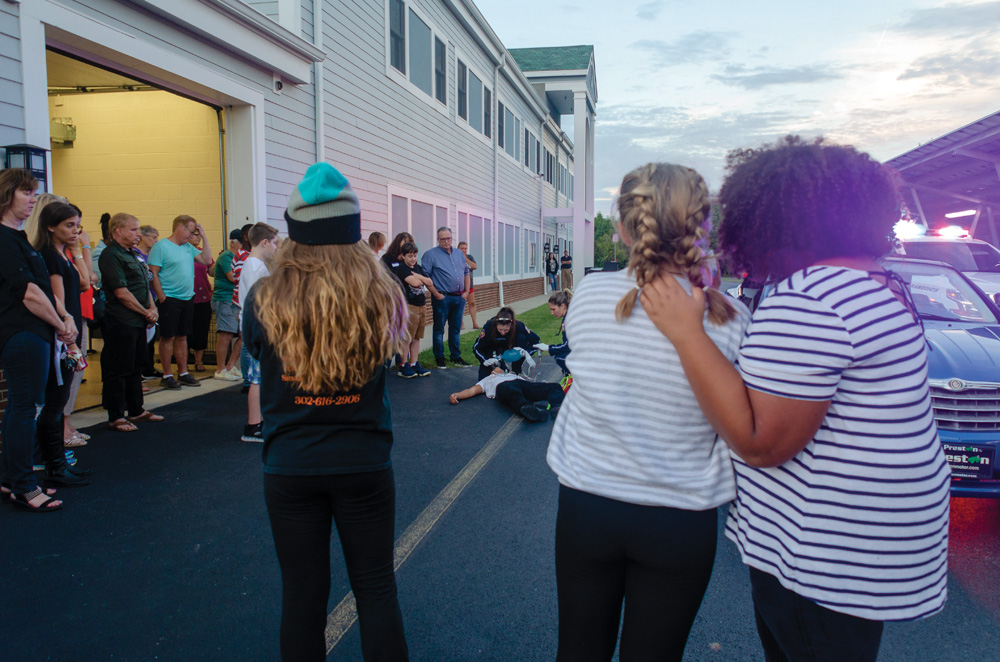 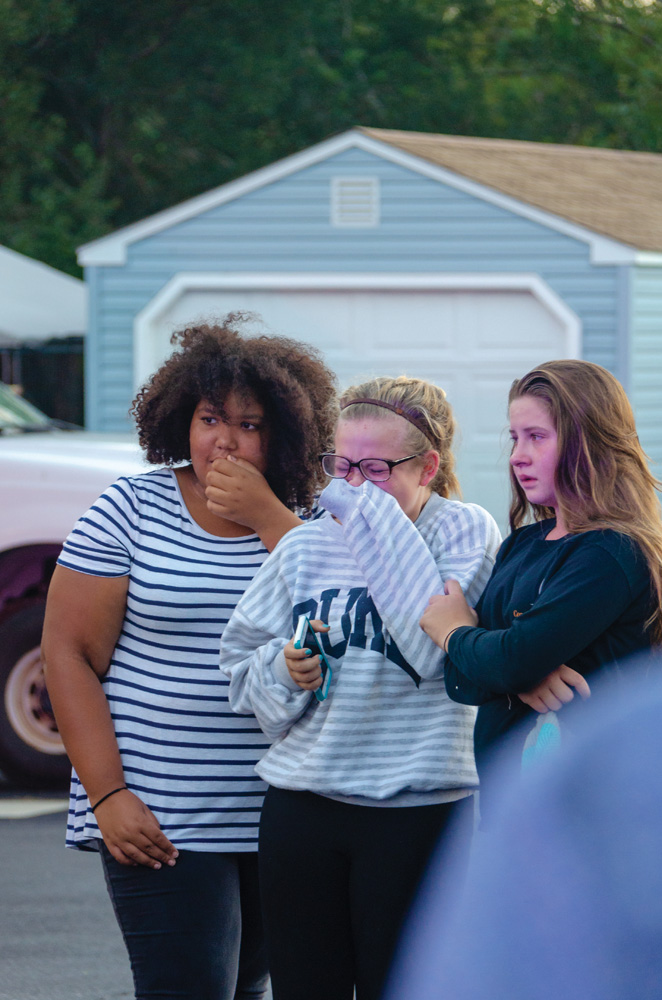 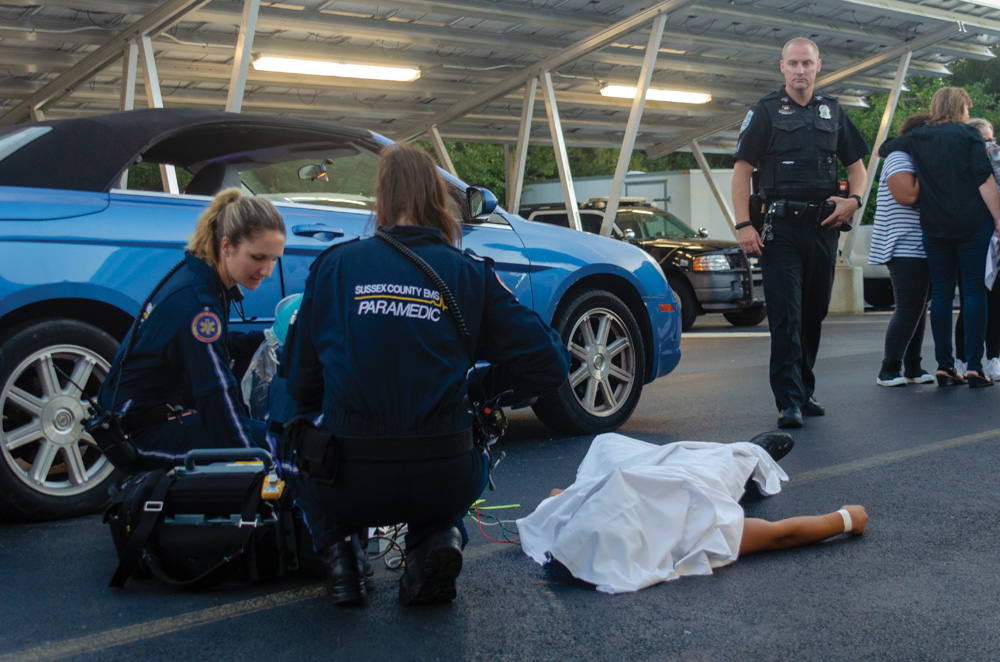 Community partners looking to give dose of ‘Reality’

It starts out innocently enough — an invitation to a classmate’s house for a party. A few wrong turns, an overdose and — poof — life will never be the same.

Some community partners in Sussex County are hoping to have an impact on youth and parents in light of the opioid epidemic plaguing the county, state and nation. The Ocean View Police Department, Attack Addiction, Delaware State Police, Millville Volunteer Fire Company, Bethany Beach Volunteer Fire Company, Sussex County Paramedics and Mariner’s Bethel United Methodist Church have joined forces to offer a free program aimed at showing kids the “reality” of drug use.

“The Reality Tour was established as a partnership across lines,” said Stacy Robinson, co-chair of the Sussex County chapter of Attack Addiction and a school nurse at Sussex Central High School. “I think this is one of those situations where it was promoted as a partnership because we all have skin in the game. It gives everyone a chance to participate and make people in the community aware of the issues and concerns as they are at hand.”

The first local offering of the Reality Tour will be on Tuesday, Oct. 23, at the Ocean View Police Department. The two-hour program will begin at 6 p.m. While the tour is free and open to the public, participating minors must be 10 or older and must be accompanied by a parent or other adult. Pre-registration for the event is also required, as space is limited.

“Last year, we lost a little over 72,000 [people] in the United States and 345 in Delaware to overdose,” said Ocean View Police Chief Ken McLaughlin. “And there’s still not a lot of action. You think we’d try to tackle this like we were at war or something — throw the full weight of the government behind this… 7,200 people — that’s a lot of people.

“We’ve done a whole lot whole it comes to responding — medical, those types of things — but as far as I know, this is one of the only games going as far as prevention and education. I think it comes down to us taking a leadership role. The fact of the matter is someone has to do it, because nobody else is doing it.”

The tour will take groups of parents and children through an all-too-real scenario of children experiencing peer pressure to use drugs and alcohol, which will ultimately result in the death of the youth being portrayed. Seven youth volunteers from Mariner’s CRASH (Creating Revolution And Saving Hearts) youth program — all of whom said they have in some way been touched by substance-use disorders — will portray the students in the tour, even acting out incarceration and an overdose scene.

“I just lost one of my very close friends; she was like a sister to me. I lost her to an overdose about a month ago,” said 15-year-old Indian River High School student Haley Reynolds.

“You don’t think it can happen to you… And then, for me, I felt that; my mom overdosed right in front of me,” said 14-year-old Sussex Academy student Savanah Shriner.

“I lost my father to an overdose, so it’s definitely something that hits hone,” added 18-year-old Madison Bright.

The youth noted that CRASH — and specifically their two youth leaders, Christina Wilson and Christina Trager — have been huge beacons of love and support.

“Our church is amazing,” said 12-year-old Olivia Ambrose, a Selbyville Middle School student. “This was a different world than what I was used to. There were people who I didn’t know coming up to me, hugging me and saying they love me. That changed me as a person. I know if I didn’t have these people to love and support me, and tell me it’s going to be OK, I would not be here and I wouldn’t be doing amazing things.”

Shriner said she felt isolated after witnessing her mother overdose.

“My entire family was in their own little world, and I felt so alone. It was so hard for me… I’m pretty sure I would not have been in a good place if [Wilson] hadn’t texted me after I saw my mom overdose on the bathroom floor. I definitely think I would’ve made some very bad decisions if she hadn’t texted me and I hadn’t felt the love.”

“It’s very humbling that God has chosen us to be a part of this,” said Christina Wilson, CRASH’s youth director. “Every day I thank God because he’s given me this honor to be a part of the kids’ lives. They’ve shaped us into who we are, and they’ve been such a big part of our lives. We learn from them, too…

“I think we lean in because we know what’s going on in these kids’ lives, and we know the hurt they have and the struggles that they have. Not only does it speak to them, but it gives them a purpose to share their story, because it helps others.”

“I was in the youth program. Everything they were saying… I’d felt that before,” added Christina Trager, Mariner’s middle-school youth coordinator, said she experienced familial dysfunction growing up, ultimately leading her to attend the church as a teen.

“To be on the other side of it, that’s why I wanted to do what I’m doing — is to make the impact it made for me. Christina and Woody [Wilson] were the first ones to really reach out to me. It was the first time I really felt loved and accepted. It became a place where I wanted to stay forever.”

Trager said there are currently about 125 active youth members in Mariner’s program.

“They’re welcome to come to one thing or all of it. It’s up to them to decide what they want to be a part of and what their schedule will allow,” she said.

The church is also working to build the Hope Center, a 13,000-square-foot building that will be used to serve church members and the community as a whole through various programs and outreach ministries.

“Our hope with the Hope Center is to do even more with the youth in the community — have an afterschool program and help them with life skills,” said Wilson, noting the church is currently offering a finance class with kids who just graduated from high school, touching on subjects including budgeting. “We also teach them the things we can do to better our community.”

The youth said while they did receive cursory lessons in school about the dangers of substance use, more could be done.

“In middle school, drug education wasn’t very in-depth. It was like, ‘Oh, don’t smoke — you’re doing to get lung cancer!’ ‘Don’t do drugs — you could overdose!’ But it didn’t really go into the effects — short-term, long-term, what it does to families,” said Ta’Kaela Siebert, a 14-year-old Sussex Technical High School student.

“They only talk to us about smoking weed. They say stay away from it… They tell you not to go into it… ‘Oh, just say no.’ It’s harder than that,” said Reynolds.

“I think as much education as we do get, I don’t think there could be too much because of how serious the problem is,” added Shriner.

McLaughlin said the lack of youth education is seen on the law-enforcement side.

“With something so profound that’s impacting the nation, you’d think there’d be something more there,” he said. “This isn’t really part of our mission statement — to be educating kids on drugs — but nobody else is doing it. It’s part community-policing, but it’s also part crime-prevention, because if one of these kids grows up to be an addict, they’re going to be breaking into cars, they’re going to be breaking into homes.”

Those who attend the Reality Tour will be able to witness how EMS personnel respond to an overdose call, and the patient passes away.

“The reality hits you... Hearing the siren and seeing the paramedics… That’s never a good thing,” said Kathy Robinson, who attended a practice run of the tour with her husband, Skip, and granddaughter Clara.

“I got very, very scared. I was standing next to my friend and it was like, this could be us one day,” added Clara, a student at Selbyville Middle School.

“It was very real,” said McLaughlin of the overdose scene. “I’d say the only component we were missing was a needle stuck in the arm…”

A funeral scene will also be included in the program, wherein attendees will walk by the casket (donated by Watson Funeral Home) of the scenario’s deceased youth and grieving parent.

“We used to ‘scare straight,’ and now we can’t do that anymore. So, we do the next best thing,” said Stacy Robinson. “We try to make it as real as possible for these kids to see what’s going on. It’s a safe environment, and it’s a really great place to start a conversation.”

The Oct. 23 edition of the Reality Tour will be the first of many, as Robinson said the group hopes to host the tour once a month for the foreseeable future.

“As my own daughter said, ‘Mom, this is going to make me think about my choices when I get older,’” said Robinson. “I think seeing real EMTs, and real fire fighters, real kids, acting out what is a real scenario that they have taken part in multiple times, makes an impact. If you were using actors and fake police, it would be more like an afterschool special.

“I think that funeral scene where the mirror is in the bottom of the casket, for her, was one of the biggest impactful pieces.”

Woody Wilson, pastor at Mariner’s, said following the September run-through of the tour that the opioid epidemic is hitting everyone and the community needs to come together to address today’s issues and work on future restoration.

“We have a great-grandmother who’s 85 years old raising a 5-year-old because the entire family is dead except for this child. We’re all going to have to band together and be connected beyond just coming here and doing this together,” he said.

Robinson said she hopes everyone in the community will take advantage of the free educational program and use it as a way to start an important conversation about substance abuse with their children.

“There’s hardly anywhere I go where I don’t end up having a conversation with someone about this issue… It organically seems to come up everywhere... I think that’s because so many people are affected by it,” she said. “Seeing all of these community partners come together invested in the same piece of education is a big piece for parents, to help them realize if all these people are coming together, this must be something I really need to talk to my kids about.”

The Reality Tour Drug Prevention Program is a national project of the non-profit CANDLE Inc. For more information, visit www.RealityTour.org.

Those who wish to register for the Reality Tour may do so through its Eventbrite page, at https://www.eventbrite.com/e/reality-tour-sussex-county-delaware-tickets....