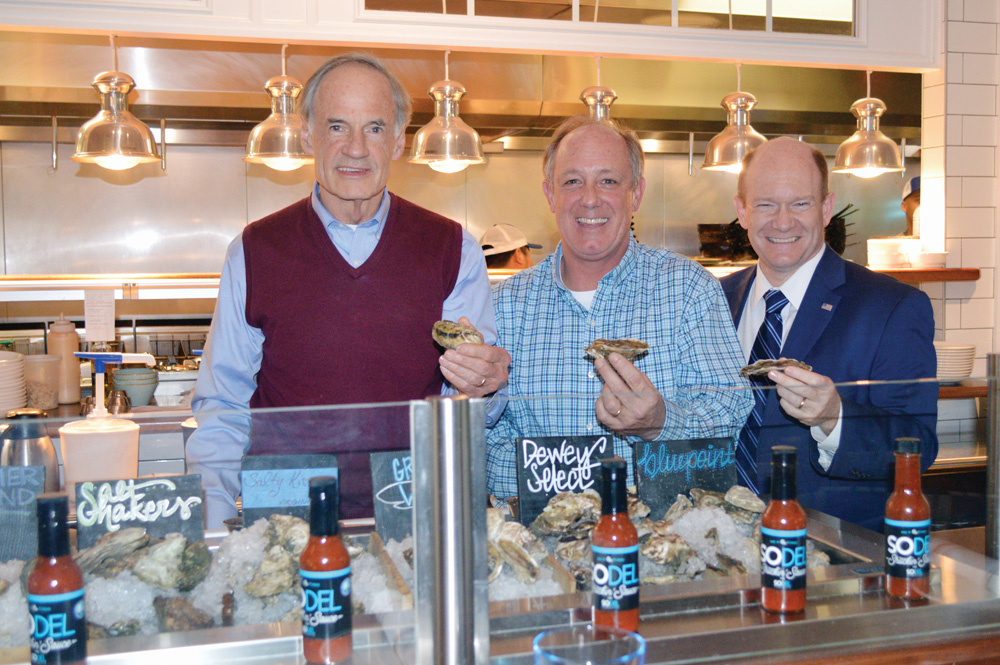 Sussex County will now be home to “Inland Bays Oysters: A Southern Delaware delicacy” — an official brand to help with marketing and sales of the area’s oyster aquaculture products.

It’s the same idea as Wisconsin cheese, Florida oranges or even the nearby “MAR-DELicious” watermelons: It’s an umbrella brand that individual growers and suppliers can advertise under.

A strong brand can be critical to market success, so the University of Delaware Sea Grant program started researching what customers want and how best to sell it. Sea Grant is not in the aquaculture business. But it supports local business, such as providing support and evidence-based information to help Delaware’s aquaculture industry succeed.

“One of the goals of the steering committee was to increase price points for locally-produced oysters, thereby enhancing profitability for growers and benefitting the local economy,” according to Sea Grant.

Rehoboth Bay oysters are finally entering the market, so the advertising can begin. The logo for the brand is a watercolor image of a shucked oyster, with a tall, clean typeface for the text. It was unveiled at a Jan. 11 event at Blue Coast restaurant in Rehoboth Beach.

“It’s something we hope will excite consumers, get them interested in this product,” said Ed Lewandowski of Sea Grant. “And I’ll be honest with you folks: I’ve tasted oysters all over the country, and they are actually, in my estimation, some of the finest oysters I’ve tasted.”

Chris Redefer was the first person to get cages in the water under the state’s new aquaculture endeavor, in April of 2018. Thanks to mild weather, he started harvesting his brand of Dewey Beach Selects in autumn — far ahead the expected 16-month maturation schedule. He’s already brought about 90,000 oysters to market. His wife, Cynthia, is also leasing underwater acreage, so the family is ready to expand.

Redefer thanked state and national agencies, plus the individual officials who helped with the hurdles of a brand-new industry. He applauded Sea Grant for brainstorming the marketing so early.

“The branding and marketing was huge,” said Redefer, who has spent many hours managing his cages in the shallow water. “When I was in the oyster mud, trying to figure out how to keep my back straight, I wasn’t even thinking about that.”

Taste tests and other market research were conducted at the Lewes-Cape May Ferry terminal, where more than 1,000 people sampled oysters.

Interestingly, although “first-time consumers might like labels, such as ‘wild-caught,’ experienced consumers want ’em to come from aquaculture,” said economist Kent Messer of the UD Center for Applied Economics.

Frequent customers also prefer to know what they’re getting with aquaculture. So branding matters.

“Part of what people like with oysters is the local experience,” whether they’re locals or visitors to Delaware’s “culinary coast,” and many are willing to pay more for a local brand.

Some consumers also enjoy investing in a product that actually helps the bay. Besides providing habitat, the shellfish are also natural filters for saltwater.

“These oysters work every day to clean the water of the bays,” said Chris Bason, executive director of the Delaware Center for Inland Bays (CIB), which led the initial research for the state’s eventual aquaculture bill, signed into law in 2013. “They are pulling algae out of the water and converting that into nutritious oyster meat, and that meat is going into our bodies and sustaining us.”

Both of Delaware’s U.S. senators took time to celebrate this light-hearted affair, and they decried the federal government shutdown, which prevented USDA employees from attending. The USDA provided a project grant and also oversees some food labeling for the branding effort.

“There’s a lot to be concerned about in the world today… but this is a good time to stop and eat some oysters,” U.S. Sen. Tom Carper said.

For growing oysters, Delaware has identified specific sites for expedited leasing in the Rehoboth, Indian River and Little Assawoman bays. More than half of that acreage is still up for grabs. Details are online at www.dnrec.delaware.gov/fw/Fisheries/Pages/ShellfishAquaculture.aspx.

Anyone involved in producing or selling oysters can request permission to use the Inland Bays Oyster logo. For details and a style guide, contact Ed Lewandowski at Delaware Sea Grant, at (302) 645-4253 or email edlew@udel.edu.