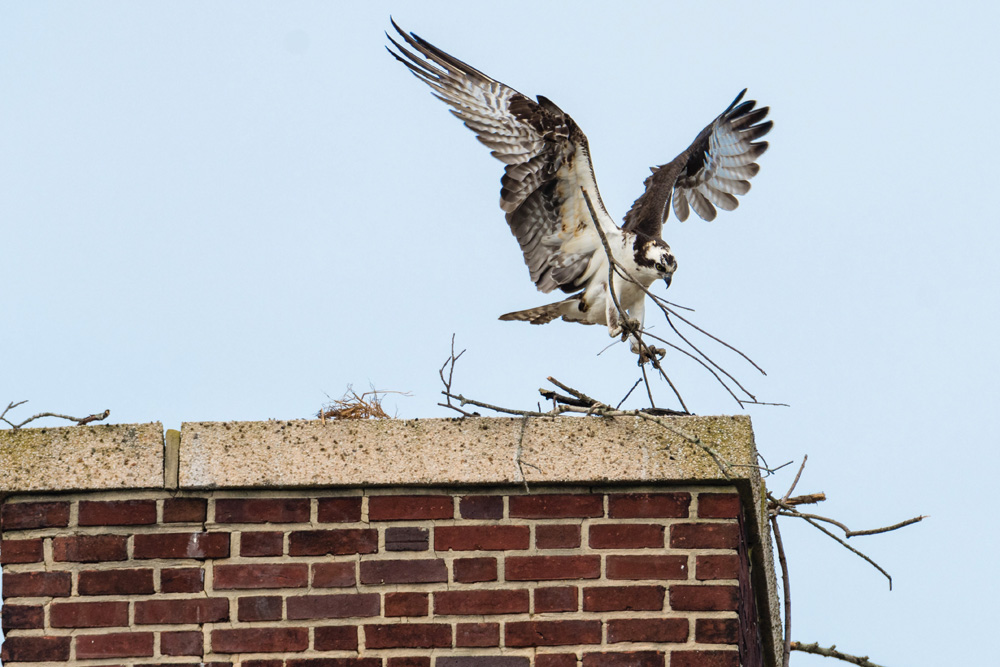 Osprey to be diverted from LB rooftop back to original home

Lord Baltimore Elementary School students and staff loved watching a pair of osprey raise their family atop the old building last year. But it’s time to say goodbye, and it’s for the birds’ own good.

Last spring, two ospreys built a nest atop the unused chimney tower, a stately alternative to their former home on nearby White’s Creek. But it’s not safe for them to stay, when their original home was practically across the street.

So while the birds were migrating more than 2,000 miles to South America this winter, the experts crafted a special covering, or excluder, to keep the birds from returning to the school’s roof.

The change is ideal for the birds and the humans below. This pair of osprey had initially set up shop across the street in White’s Creek, a tributary of the Indian River Bay. When a pair of geese claimed the perch early in 2018, our protagonists — the osprey — had to find another spot. They chose LB’s 90-year-old iconic brick building instead, crafting a large nest and raising three fledglings.

The school turned to Jodi McLaughlin, an osprey advocate and volunteer for the Delaware Division of Fish & Wildlife.

“We’re hoping to get that in place before the birds come,” said Principal Pam Webb this week, “so that the osprey will go back to their original nests, which … was right across the street.”

Last year’s turn of events was considered “nuisance nesting.” The chimney isn’t active anymore, but it’s not completely closed, either. So sticks, bird droppings, or the babies themselves, could fall down the chimney or onto the ground, immediately above where children line up for recess and for dismissal.

“They were beautiful,” Webb said. “They’re fun to watch. The kids really enjoyed it last year.”

It was a great nature lesson, since “the kids could watch them bringing over sticks for the nest … If they came back this year, we could talk more about migration” or even name the birds, Webb said.

“It was a pleasure to watch them, but we know they’re better suited over there,” Webb said. “For their safety, for the next few months, we thought it would be best to have them back in their original spot.”

The school will use a triangular metal cover to prevent birds from building a base on the flat chimney. A temporary deterrent was also installed at their original creek location in Ocean View, to help keep invading geese at bay until the osprey return.

“Ospreys do generally mate for life,” McLaughlin said. “They bond with a new site location, and they come back year after year. … And now they’re seeing some pressure from geese” that are realizing they can nest on unclaimed platforms, too.

“Unfortunately, geese arrive earlier and weigh more, “and if the geese lay eggs, they’re not moving,” McLaughlin said. In 2018, the feathers flew when the osprey tried to reclaim their proper platform.

Defeated, the osprey winged up to Lord Baltimore and built a “nuisance nest. They’ll find a place that’s not the best place to nest,” McLaughlin said. (Ironically, the geese soon abandoned their platform, so the osprey would often breakfast there but continued nesting on the school.)

Once nesting begins, both species are protected. The Federal Migratory Bird Treaty Act prohibits people from interfering with both geese and osprey eggs, even if they nest on a human’s chimney or boat.

“This isn’t the only site where we’ve seen geese nesting. … There’s pressure with development and land use,” but geese are flexible, while osprey will demand their favorite site every year, said McLaughlin.

The ospreys’ original platform was built years ago by a waterfront property owner who wanted to provide the pair a safer home. McLaughlin’s been watching them since about 2015.

After raising families all summer, the birds depart for South America at different times in autumn, but they’ll return for the exact same neighborhood every spring. Sussex County’s osprey take the eastern flyway down through Florida and the islands to South America.

Although they aren’t banded, the birds have distinct personalities, from their behavior to their favorite “dining trees.” For instance, the LB male would sit up on weathervane and eat fish, McLaughlin said, and the female is “a really tough mom.”

Ospreys are considered special because they demonstrate the health of the ecosystem.

“Ospreys are an indicator species, which means they’re at the top of the food chain. … They prey almost 90 percent of the time on fish. So when we have such a nice healthy population in the inland bays, we know that the fish populations [are fairly stable],” McLaughlin said. “We know then that our waterways are healthy enough that they can survive because there is enough fish to feed them.”

In fact, a whole colony of ospreys lives near White’s Creek, and even the Bethany Beach Nature Center monitors several nests of its own each year.

In travelling around the creek, McLaughlin’s goal is to monitor birds and educate people to consider their impact on this “amazing species.”

“The time to protect a species is while it’s still common. And that says a lot about osprey in our area,” McLaughlin said. “Right now we have good numbers every year … but only 80 percent of those chicks that fledge will make it through their first year of life.”

Raptors, including osprey and bald eagles, were seriously threatened in the past because DDT (which the U.S. eventually banned in 1972) caused thin-shelled bird eggs, which led to cracking.

Now, McLaughlin loosely estimates there are hundreds of birds in the area, since she alone starts with 50 nests each nesting season along White’s Creek and sporadic areas from Dewey Beach to Fenwick Island.

Today, people are still putting other pressures on wildlife, such as development. Geese will nest elsewhere, but ospreys want to settle in their familiar neighborhood, which can mean nuisance nesting. Some people also install platforms in non-ideal places, such as close to restaurants, McLaughlin noted.

Human disturbance is increasing. The birds settle down in the quiet springtime, but they do not like summertime crowds, and they especially don’t like people coming close.

“We can lose chicks if [parents] abandon the nest,” McLaughlin said. “We’re causing them stress … and they retreat.

“You can disturb these birds, and we can love them to death,” she added. “They are not in a zoo, and we need to keep our distance from them.”

People can learn more and help monitor their own neighborhood birds at www.osprey-watch.org.

McLaughlin noted that, despite all of the planning, the excluder isn’t guaranteed to work.

“These are wild animals. We don’t know if we’re going to be successful getting them back there,” said McLaughlin of the original nesting site on the creek. “We’ll have to see.”