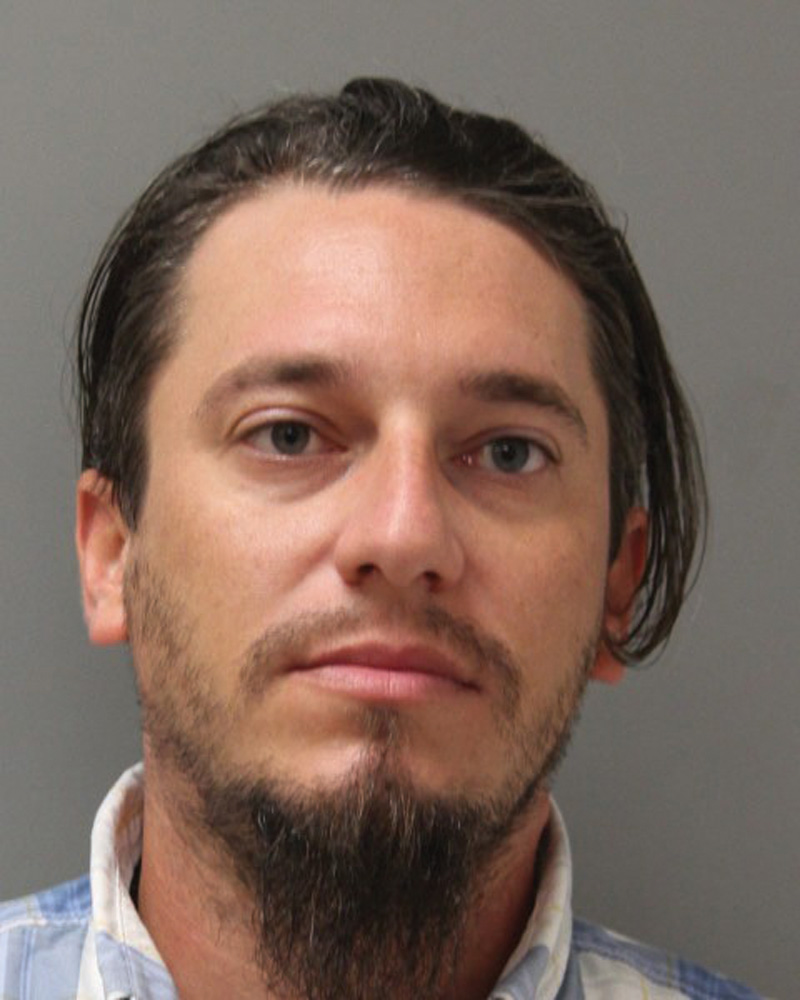 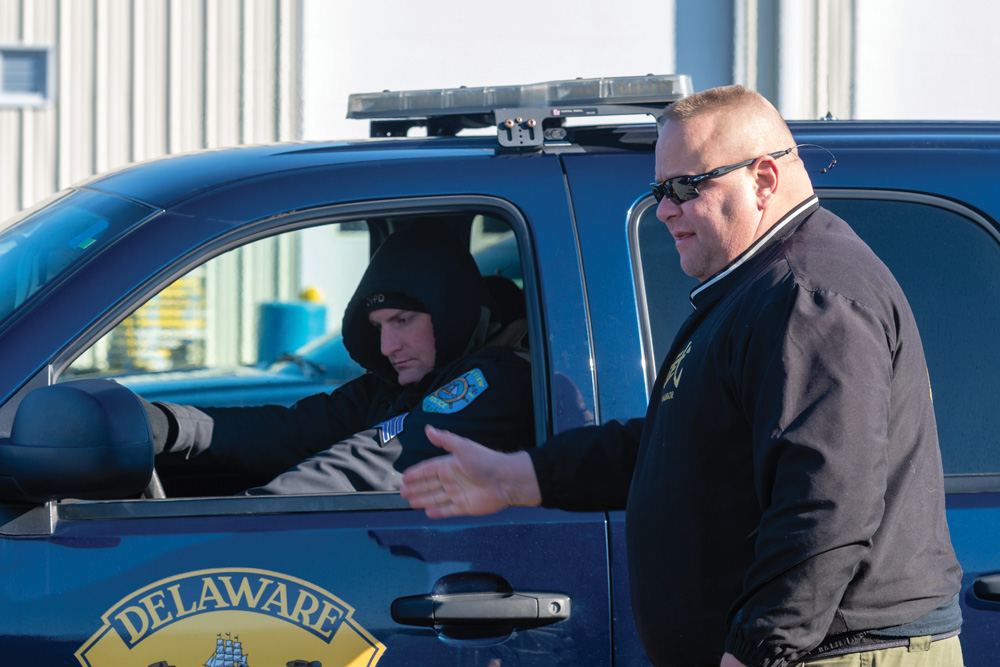 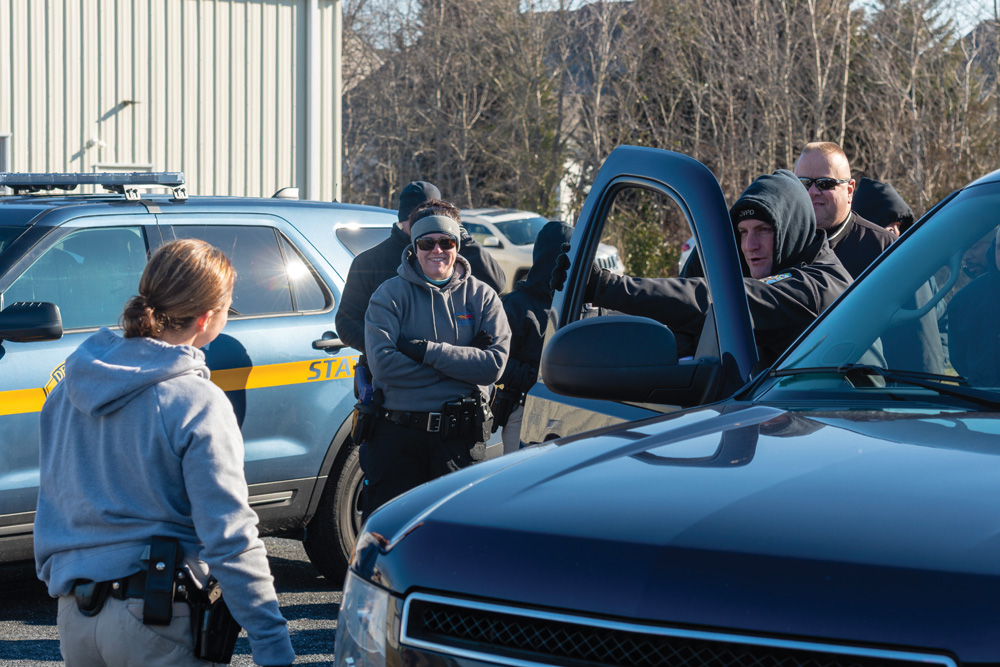 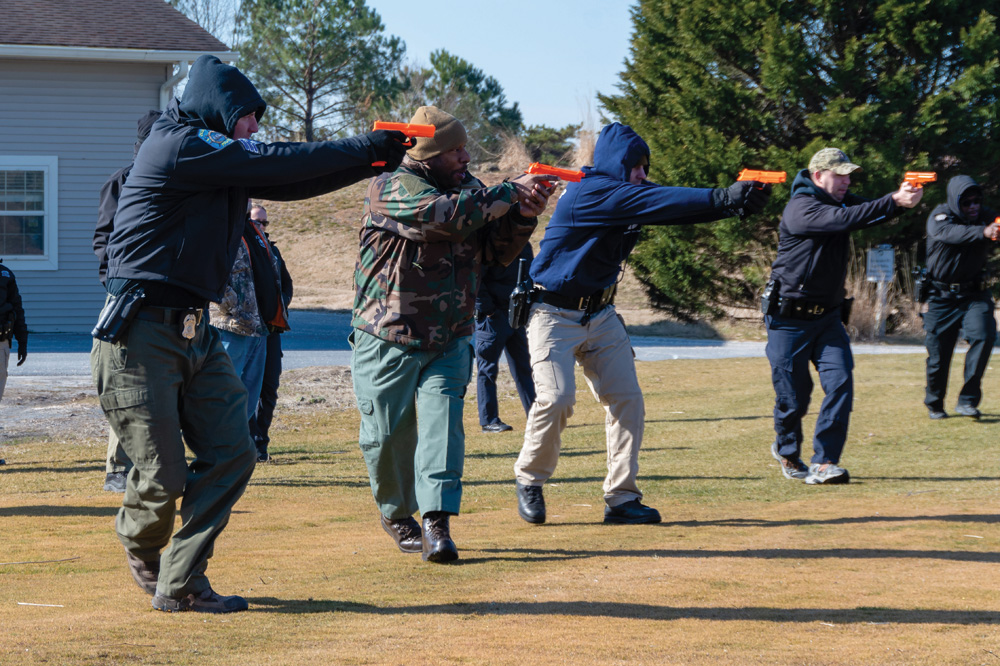 “Traffic stops are the most dangerous thing we do. We don’t know who we’re walking up to, who’s in the vehicle…” said Ocean View Police Sgt. Rhys Bradshaw. “Just because the vehicle is registered to somebody, it doesn’t mean it’s always that person driving the vehicle. It could be a car that was just used in a robbery or a home invasion, and it hasn’t been reported yet.”

On March 8, OVPD’s Sgt. Sidney Ballentine stopped Paul Owen, 32, of Ocean View. Owen had previously been stopped by Ocean View police on May 25, 2018, but he was now wanted for failing to appear in Sussex County Superior Court on those charges — a third-offence DUI, as well as failing to have a driver’s license.

Having arrested Owen, Ballentine then learned that Owen was also wanted by authorities in Escambia County, Fla. Investigators from the Escambia County Sheriff’s Office told the OVPD that Owen was suspected of committing a home-invasion robbery in Florida on Oct. 11, 2017.

During the robbery, Owen allegedly was armed with a shotgun and wearing a mask. They reported the homeowner was assaulted and multiple firearms were stolen.

“It just goes to show you never know who you’re going to stop,” reiterated OVPD Chief Ken McLaughlin. “Sid stops this guy for a DUI, not knowing he’s someone who committed some pretty serious violent crimes. We’re just lucky it turned out OK here and we didn’t have any issues.”

Owen was committed to the Sussex County Correctional Institute in lieu of $9,000 secured cash bond.

Additionally, a detainer was filed on Owen by authorities in Florida for home-invasion robbery (armed), use of a firearm during a felony, theft of a firearm (five counts), aggravated assault and committing a felony while wearing a mask. After his charges in Delaware are adjudicated, Owen will be extradited to Florida.

“We want the guys to be out there enforcing the laws, because even stuff like a minor traffic stop can lead to other more serious crimes. This is a good case, where we pick a guy up for a DUI and it leads to him being held on felony charges out of the state of Florida,” said McLaughlin.

“We had 79 similar incidents last year alone, just with the Ocean View Police Department, where we picked up folks who had outstanding warrants. I think because we’re aggressive in picking these folks up that do have warrants, we’re able to remove them as quickly as possible from our jurisdiction, which helps keep crime down. It’s a good crime-management tool to aggressively go after these folks who are wanted, or have committed crimes and failed to appear in court.”

McLaughlin praised Ballentine for the arrest and his dedication to keeping the Town’s residents safe.

“Sid’s just an all-around good officer. He’s constantly focused on patrol. He’s got an excellent memory and outstanding knowledge of the community and the criminal element that residents in our community. Because he’s got that intimate knowledge of what’s going on, he’s very successful at solving crimes and locating these types of individuals.

“He’s a very good example of the results you get when you have good, qualified, well-trained officers. You’re a product of your people. We’re fortunate here in Ocean View that we’ve got a really good team and subsequently we win games… I don’t know how else to put it.”

“This teaches us how to do traffic stops safer. It teaches us different types of approach techniques, what to do to fight off an ambush…” said Bradshaw, noting that writing a ticket in the car could easily distract an officer from also keeping an eye on their surroundings.

The STOPS program is accredited and certified by 38 state law-enforcement training boards.

“It gets officers to rethink the way they do business,” said Pro Train Inc. CEO Ron Hantz, who is also a police officer. “We teach them how to be safe during every single call by thinking, ‘What is the safest way for me to accomplish this task?’ It may be a loud-music call. It could be a robbery call… You never know what you’re walking into as a police officer.”

Hantz said he and his team travel the country teaching survival tactics to law-enforcement officers.

“Everything is officer-survival — getting officers safely home to their families,” he said. “We always want to have the element of surprise in our favor, because a police officer is always reacting to a deadly-force encounter. It’s never something he wants to do. He doesn’t have the plan in his head that he’s going to go up and hurt them. He’s reacting to what they’re forcing him to do. He’s already behind the power curve, and action is always faster than reaction… We never want that to happen, but sometimes it has to happen.”

This kind of training is essential in every community, said Hantz, regardless of its size.

“The majority of departments in the country are small agencies, and it’s absolutely just as important for a small-town officer as it is a big-city officer. A very, very small percentage of police officers’ interactions with the public end up being something violent.”

Hantz praised McLaughlin for being proactive when it comes to training his officers.

“I’ve seen thousands and thousands of agencies across the country in my years of teaching. I’ve never seen any agency that is as well-trained and as well led as the Ocean View Police Department. I can honestly say that,” he said. “Chief McLaughlin is the tip of the spear. He’s a great leader, and his men and women are very well-trained. They have a lot to be proud of with their police agency. It was a joy coming to Delaware. The police officers are top-notch.”

A total of 19 officers participated in the class, including officers from South Bethany, the Delaware State Police, Rehoboth Beach and Smyrna.

“We’re a little department, but we have people coming from all over to train at this department,” Bradshaw added.

While officer safety may not be a focus for the everyday citizen, Hantz said, it’s a critical aspect of the job, and is aided by training such as STOPS.

“The police are out there trying to protect everybody. They’ve got a very difficult job and when things go bad it happens very, very fast. And underneath that bulletproof vest, they’re humans, too. They’re making that split-second decision. I have a lot of respect for the police officers out here who are brave enough to put on that uniform and badge and risk their lives for people they don’t even know.”