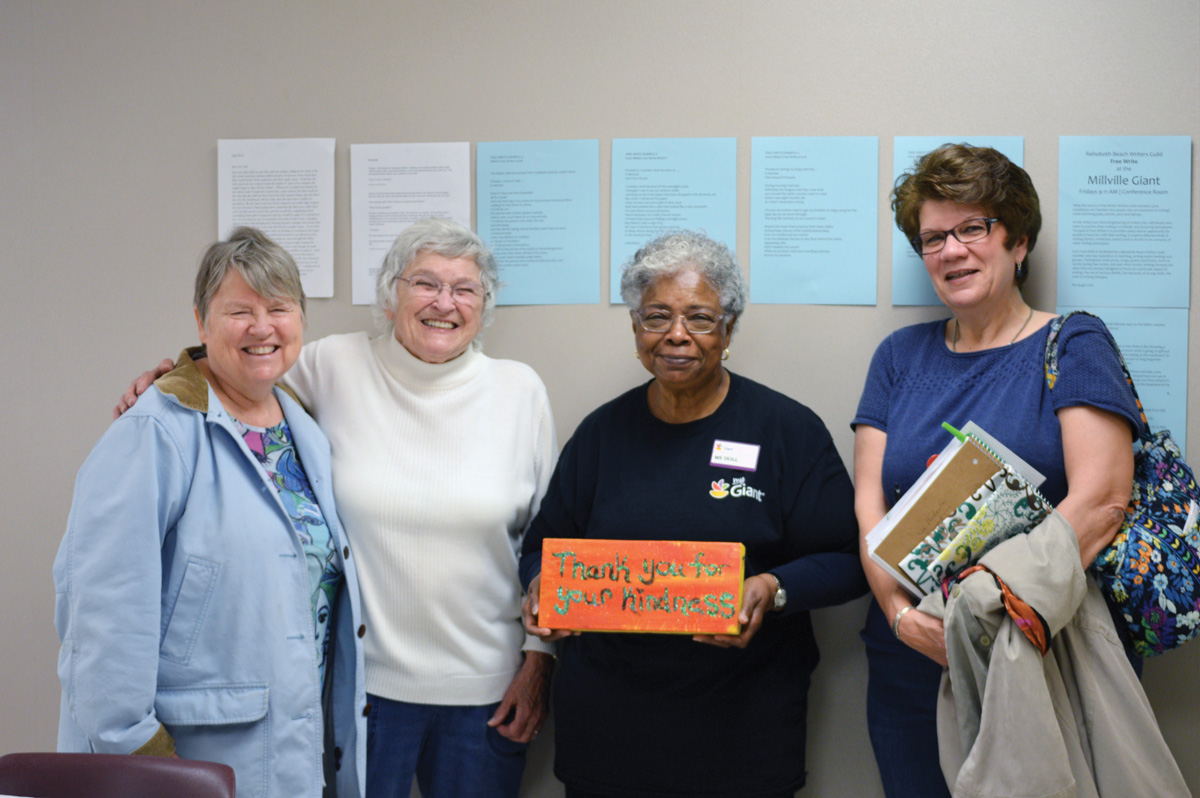 FreeWrite! group thanks Giant for years of support

On most Friday mornings, a group of local writers gathers around a table in an upstairs conference table in the Giant grocery store in Millville, scribbling away.

“Everyone contributes to this group. When they bring the writing prompts in, everyone tries to do something different,” said member Kathleen McNamara of Dagsboro, who joined the group in 2015.

“It’s amazing to watch the perspective people take to a prompt that is given to them. Some of them are hysterical, some of them are emotional… It’s just neat to watch people’s brains work. I like that. And it has taught me to take a different type of perspective on writing… more imaginative, more descriptive and more direct… to look from a different point of view.”

The Free Writes! group has been meeting at the grocery store for the last 11 years — at no charge to the group. So the group decided to serve a hearty luncheon to Giant employees earlier this month to show their appreciation to the store and its staff.

Store Manager Bob Suttmiller said he and the staff were touched by the gesture.

“It’s an open room that we do let people use for different things. Years ago they asked if they could use that room… They come in every Friday, and they do their thing. We keep the room clean for them, and that’s it,” he said. “We don’t expect anything in return, so it’s very nice of them.”

Suttmiller said the upstairs conference room is used for internal classes and to prepare for the store’s annual carnival, but aside from that, it is open for public use at no charge.

“We want to be a part of the fabric of the community. We want to layer in, and we’re here to help in any way we can. We’ll work with anyone… The Cub Scouts could meet in there. It’s just an open room.”

Those interested in using the room, said Suttmiller, can call the store for more information. As for the Free Write! group, he noted they’ve been a wonderful organization to work with.

“They’re a great group of people, and we enjoy having them.”

The FreeWrite! group is associated with the Rehoboth Beach Writers Guild, a non-profit organization dedicated to fostering the literary arts in South Coastal Delaware.

According to its website, FreeWrites! are an “informal gathering of writers of all skill levels who meet to practice their writing in a friendly and nurturing atmosphere. The goal of the FreeWrites! is to provide a place and an opportunity for people to have fun with their writing, to explore different genres, and to do this in the company of other writing enthusiasts.

“They are the parent operation here,” said Hassen of the guild. Executive Director Maribeth Fischer “is the goddess to anybody who knows her.”

“To me, what’s important is we don’t have to be a member of the guild to participate. I’m still traveling a lot and not ready to make runs up to Rehoboth for classes, but because of the encouragement of the guild, I don’t feel uncomfortable being a participant and not a member,” added Massey, noting that every participant chips in a dollar per Friday.

The Millville group began meeting in the space due to the work of Frank Minni and has grown from a handful of people to 28 members, with an average of 12 people who attend each week.

“Frank is what started this particular branch and kept it going. He would come here every week,” said Fran Hassen, the group’s secretary. “Different people have said sometimes it would just be him and them. A lot of times it would just be him and me. He kept coming through, every week, for years and years. Without Frank, this would not be here now.”

Minni used to provide the writing prompts each week; however, since he’s moved away from the area to be with family, now everyone contributes prompts.

“Someone brought in paint chips and put them out on the table. You had to write about the paint chip. The name of it was unbelievable; it was called ‘Shameless Blue.’ I just wrote from the perspective of a guy painting the outside of a house,” said McNamara. “The stuff we do here really gets you thinking about different ways of doing things.”

“It creates a real variety of stuff,” said Massey. “For me, it’s taken me out of the autobiographical and into the creative. For some people, it’s been therapeutic; for me, it’s been stimulus. One guy said, ‘I’m getting old, I want to make sure my brain is still working.’”

The group meets almost every Friday from 9 to 11 a.m. and works through several prompts.

“The two hours we’re here, it goes so fast,” said McNamara. “We’ll write our piece, sometimes 5, sometimes 7, sometimes 10 minutes. And you have to do it in that timeframe. You don’t have the time to stop and think and edit what you’re doing. It’s stream-of-consciousness. Once we’re all finished, everyone will read what they wrote, and then we’ll move on.”

“There’s no critiquing. You might get an ‘Atta boy’ or a tear, but there’s absolutely no judgement,” said Massey.

“People share some really deep things… I appreciate the fact that people feel comfortable writing some of the things they write,” added Hassen.

The FreeWrites! are also a social event, as many members have lunch together after the two-hour sessions.

“It’s a nice activity to keep your brain going, good motivation to keep writing and to be around other writers. The writers here are so good,” said Hassen. “It’s just a fun thing to do. I love all these people.”

Whether they write prose, poetry, songs or fiction, each member has a unique voice and perspective to offer the group.

“We have such a variety,” said Hassen. “This is a talented group.”

“It’s an amazing group, it really is. I really enjoy being here,” McNamara said.

“I think there’s a lot of different viewpoints, but I think what we all agree on is that we have fun,” added Massey.

The FreeWrites! are held in the mezzanine conference room in Giant almost every Friday morning. All interested parties are welcome to attend. For more information about the Rehoboth Beach Writers Guild, visit www.rehobothbeachwritersguild.com.