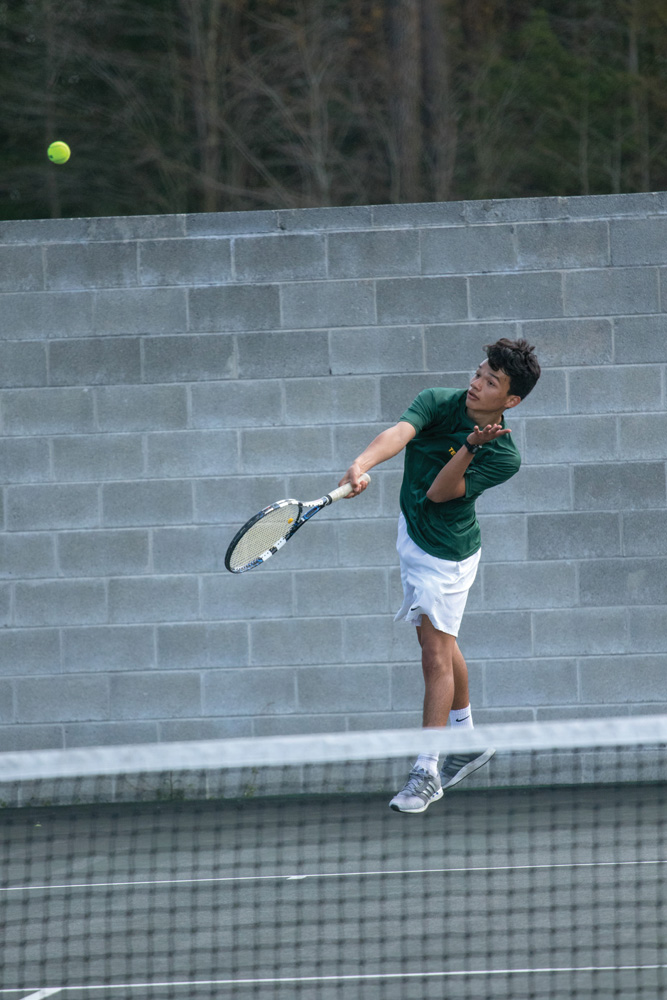 Freshman Christopher Sichuan set the tone for the Indians in his first singles match with a 6-2, 6-4 win that would lead the way to IR’s 5-0 sweep of Lake Forest in a Henlopen Conference South Division contest on Tuesday, April 30.

Senior Jhony Ortiz and Juan Linares were victorious in their second and third singles matches, respectively. Ortiz dispatching his opponent in straight sets at 6-3, 6-0, while Linares took both sets in his match, 6-4, 6-1.

In doubles action, IR junior exchange student Yves Graf teamed up with senior Brian Quezada for a 6-2, 6-4 win at first doubles. The young duo of sophomore Joshua Bird and freshman Blake Morgan cruised to a 6-1, 6-1 win at second doubles.

The Indians have now won five of their last seven matches, and now sit at 6-4 overall on the season.

Galbreath made quick work in a clean sweep of Stephanie Erwin, 6-0, 6-0, at second singles.

The clinching point for IR in the match came at second doubles when senior Amber Hills and her freshman partner Nicole Norman won a 6-4, 6-3, match over the Spartans’ Irene Donald and Morgan Dollinger.

The win improved IR to 4-7 on the season as they’ve now won four of their last five overall.

The status quo for the Indian River baseball team is not good following three more losses over the past week to the likes of Caravel Academy, Salesianum School, and Delmarva Christian.

Against Caravel, the Indians dropped a 6-2 decision while managing just three hits. A last-ditch effort in the seventh inning where they scored two runs to break up the shutout wasn’t enough against the Bucs (7-3 on the season).

Chase Hall, Derek Bellemare (double), and Colby Willey (double) had the lone hits for IR with the latter two scoring the Indians’ runs.

The Indians again tried to make a late comeback against Sallies in an 11-5 loss. The offense again struggled with just four hits. Grant Argo, Hall (double), Tyler Kramer, and Ian Shaner (double, 3 RBI) were credited with the knocks.

Then in the 12-2 loss to Delmarva Christian on Tuesday, April 30, the Indians again struggled at the plate picking up just three hits — Ryan Foxwell, Michael Meehan, and Shaner (double) — against the Royals.

IR (4-9) now has a week off to see if it can find a way to salvage what is left of its season with five games remaining. The Indians host Milford on Tuesday, May 7, at 4:15 p.m.