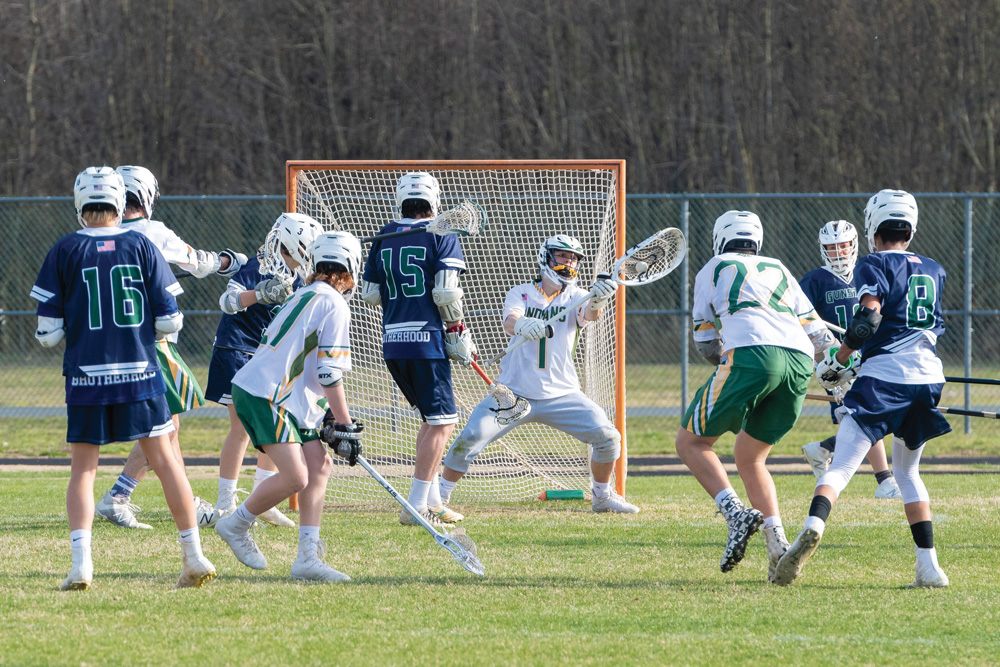 The confidence levels are high. And why wouldn’t they be?

The Indian River boys lacrosse team has been putting the Henlopen Conference on notice — as well as the rest of the state really — that they are a team to be reckoned with here in 2019. Following their 18-2 shellacking of Sussex Tech on Monday, April 29, the Indians improved their record to 7-3 overall. It was their seventh straight win.

“I cannot say enough good things about these guys. It’s a mentally tough group of kids. You’re not going to be able to get them down. They practice hard, so they play hard.”

Junior Tommy Harris scored a season-high eight goals and assisted on another to lead the way for IR. Dylan White and Ben Spencer each recorded hat tricks, while Zach Schultz and Ben McCabe rounded out the scoring with two goals apiece. Ben McCabe also had six assists with White picking up four helpers, and Schultz two.

“Tommy is so good, and he is the beneficiary of us having six good offensive players,”  Coach Spencer added. “These guys are always looking for each other. They can dodge, and beat guys off the dodge, and set up their own plays. But then when that slide comes, they know Tommy is going to be at the right spot at the right time to finish plays for us. He’s really concentrated a lot of his game just to be the best crease attack that we need him to be. He’s a finisher.”

IR’s Sam Miltner was solid once again making six saves between the pipes for the win.

During the seventh-game win streak, IR has out-scored their opponents 76-26. The three losses in the beginning of the year came by a combined five goals.

Clearly, this is a team that is clicking on all cylinders, and is ready to take the next step into the post-season, which is just two weeks away.

But as Coach Spencer noted, the Indians need to maintain their focus at one play, one quarter, one half, and one game at a time.

The Indians had their final home game of the season on Wednesday night, where they recognized the team’s seniors — Miltner, Patrick Spencer, Schultz, and Luke McCabe. Results of the game can be found on our Facebook and Twitter pages.

IR then hits the road for the final four games of their season starting Friday, May 3, at Delmar at 5:30 p.m.