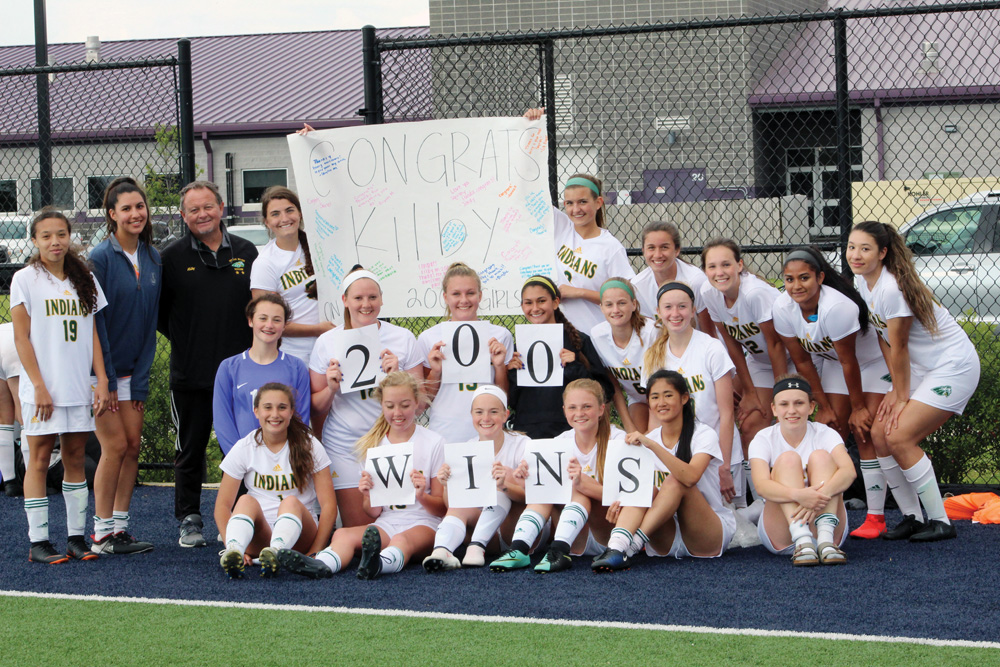 With a chance to clinch another Henlopen Athletic Conference (HAC) South Division crown, the Indian River High School girls’ soccer team loaded the buses for a pair of road games at Milford and at Sussex Academy on back-to-back nights.

On Monday, May 13, the Indians cruised to a 4-0 win over Milford; then, on Tuesday, May 14, IR posted an identical 4-0 shutout over rival Sussex Academy to clinch the divisional championship.

Those wins turned out to be Nos. 199 and 200 for Steve Kilby, the veteran Indian River field general of both the boys’ and girls’ soccer programs.

The wins made it four straight shutouts for the Indians. The division title earned the Indians a berth in the HAC Championship game on Thursday, May 16, against arch-nemesis Caesar Rodney (after Coastal Point press time.) Results of the game can be found on the Coastal Point sports Facebook and Twitter pages.

“I am very happy with the performance of the team having had to play two nights in a row, especially after Monday’s game in the pouring rain,” said head coach Steve Kilby following Tuesday’s game. “The team continues to push hard in support of our goalie, Hanna Bird. With Micayla Meehan and Mackenzie Gorey — our center backs — coupled with Brynn McCabe’s play as a holding mid[fielder], it keeps us organized centrally as we transition out of the back.”

In the win over Milford, super sophomore Izzy Binko scored three, while Avery Congleton added another.

Binko’s first goal came in the 22nd minute on a penalty kick, and then four minutes later she made it 2-0 with an assist from Grace Engel. Three minutes into the second half, it was Binko again, with a helper from Sia Diakos. The team’s Hannah “with an H” Bird gave a nice pass to Congleton in the 72nd minute, and the IR junior smashed it past the Bucs’ goalie for the final score.

Against Sussex Academy, Binko scored twice, and Congleton and Sia Diakos each scored once.

Congleton got IR on the board first in the eighth minute, with an assist from Binko. About 13 minutes later, Binko scored her first goal, with a helper from Engel. Binko added her second a few minutes short of the halftime intermission, to make it 3-0.

Fellow super sophomore Sia Diakos’ goal iced the contest four minutes into the second half on an unassisted goal.

As a team, IR has outscored their opponents 65-18, with their defense recording eight shutouts amongst their 11 wins.