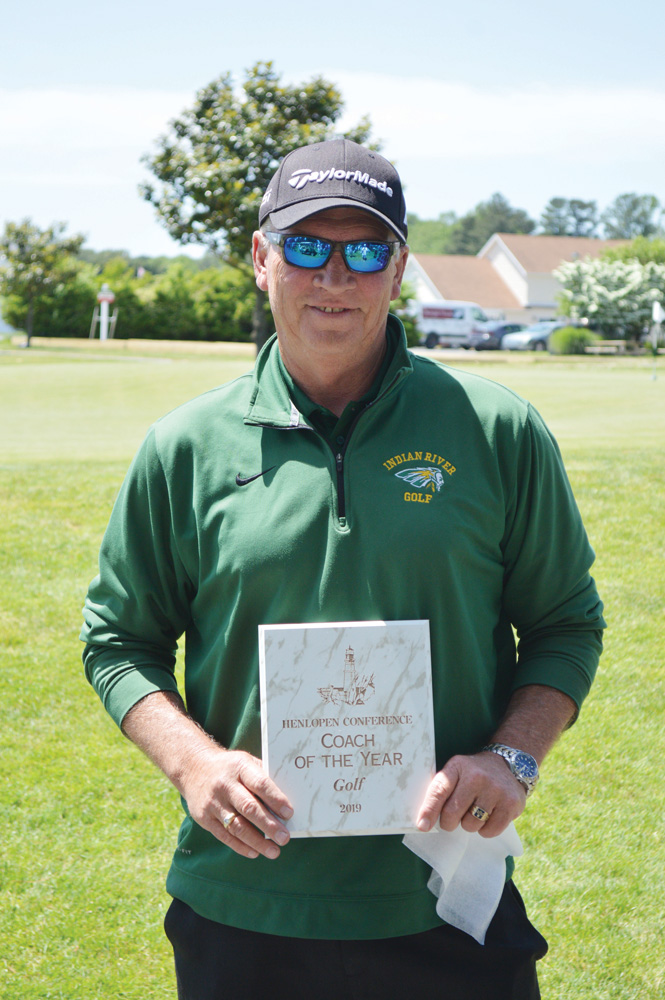 It was a day filled with ups and downs for the Indian River golf team as they participated in the Henlopen Athletic Conference golf championship tournament on Tuesday, May 21, at Mulligan’s Pointe in Georgetown.

Junior Patrick Gogarty carded an 86 to finish in 6th place overall amongst the nearly 75 golfers that participated in the event. The course was a par 72 and covered 6,677 yards that has been recently renovated to feature many holes with trees, bunkers and ponds scattered throughout.

Caesar Rodney junior Matt Miller shot an even-par 72 to win the overall championship, while leading his fellow Riders to the team title as well with a combined score of 322. Sussex Academy’s Hannah Lydic, an Ocean View resident, finished second with a 4-over par 76.

The teams’ combined scores are that of the top four lowest scores of the six team members. Rounding out the Top 5 after CR was Sussex Academy (358), Sussex Tech (361), Cape Henlopen (369), Indian River (373). Smyrna, Milford, Delmar, and Woodbridge were also involved in the team competition.

Luke Morgan carded a 93 with Ryan Stone and Ben Brzozowski each finishing up with a round of 97. Zach Lingenfelter was the sixth member of the Indian team that played on the day, and he shot a 105.

The DIAA State Golf Championships will take place on Tuesday and Wednesday, May 28-29, at Cripple Creek Golf & Country Club, which is IR’s home course.

After the conclusion of the HAC tournament, IR head coach Billy Wingate was named the conference’s Coach of the Year. He was quick to point out that without his players the award would not be possible.

“A coach is only as good as his players,” Wingate admitted. “I’m lucky to have a group of guys that work hard every day to get better.”

Wingate also noted that Gogarty and Hook both were recognized with second team all-conference honors, while Brzozowski picked up an honorable mention nod.