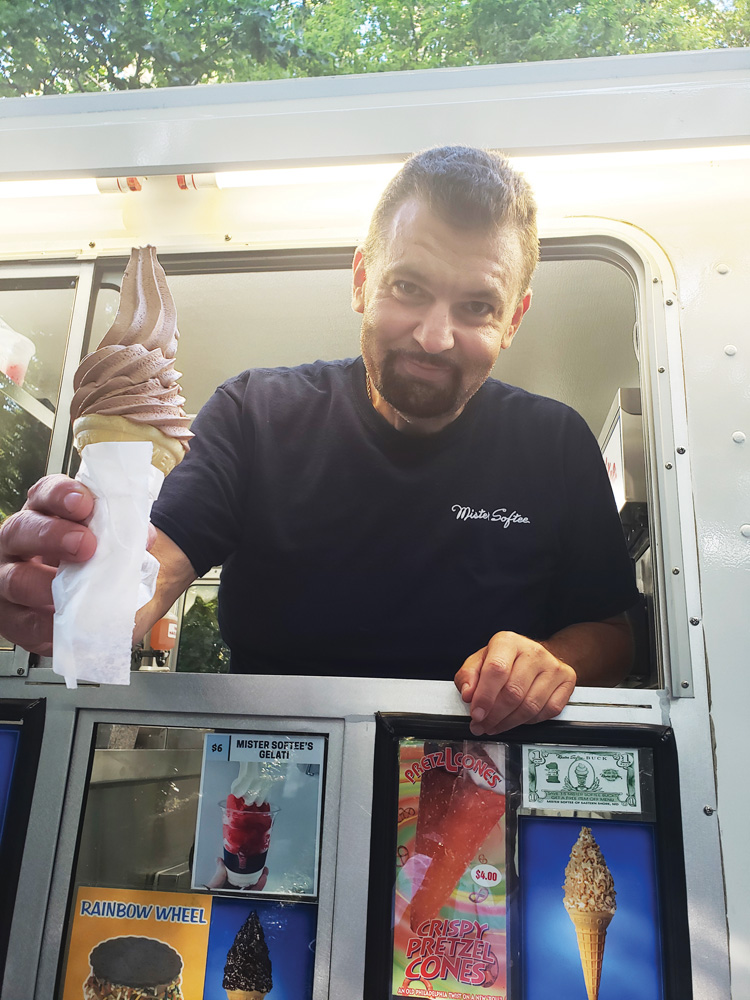 I’ve got a soft spot for Mister Softee

I turned the corner onto my street and heard the music from more than 40 years ago, yet it was so familiar.

“Mister Softee?” I said to myself, in a kind of incredulous whisper.

Indeed, it was, and indeed it is, the ice cream truck that sweetened my childhood, driving around Ocean Pines, Md., where I live, with Anthony Sessa handing cones and sundaes out the little window as the jingle plays.

“You don’t know what this means to me,” I told him, introducing myself and beaming up at him as he smiled and nodded.

He hears it all the time, he said, recollections of summertime made richer by the ice cream truck that my three best friends and I rushed to every afternoon.

Those days are long gone and now cherished in our memories.

Jodi, Jaimie and Janet Campbell lived across the street. We grew up together, with only one year separating each of us. From early morning until sunset, we were splashing in the inflatable swimming pool, riding our bikes, playing badminton. And every day, when we heard the jingle, we’d ask our mothers for 15 cents or a quarter, imploring with the kind of urgency children are known for.

“Hurry up, Mom. He’s going to leave,” I’d plead as she picked out a dime and a nickel from her flowered change purse.

“He’ll wait for you,” she would say. And he always did.

When he heard the truck, he’d tell me to round up my neighborhood pals and he’d pay for every cone, including one for my mother and older sister, then settle down on the front porch steps with his favorite hot fudge sundae.

Above all, my dad loved ice cream. When he died in 2008, I wrote in his eulogy that, in his opinion, every meal should end with a few scoops.

Often, I sat on the porch beside him with my cone and he’d tease me, widen his eyes and warn there was a big, hairy spider behind me so he could catch me off guard and try to grab the cone.

I’d tell him about the book I was reading. He’d nod and, without fail, say, “What do I always tell you, Little One? Knowledge is power. If you’re smart, you’ll go far in life.”

He’s been gone 11 years, and I still get tears in my eyes remembering those conversations, the dad I adored and his youngest daughter, side by side in the sunshine with Mister Softee, the simplest, most tender, of moments.

Sessa, too, was close to his father, Carmine, and uncles Louie and Al DiFranco, who all drove Mister Softee trucks in Philadelphia when he was growing up.

At the height of their success, each brother had 15 trucks.

“Philadelphia had many kids. There were big families, and there were a lot of kids,” Sessa recalled during a recent conversation, as he worked the machine, expertly piling chocolate soft-serve onto a cone for me.

In the early days, the trucks were called Valley Fresh.

The company was founded by brothers Bill and Jim Conway. Around 1955, one of them said, “My wife says this ice cream is so soft, we should call it Mister Softee,” Sessa said.

In logo form, Mister Softee is drawn as a man with a cone for a face and three layers of vanilla for hair, and he’s wearing a red bowtie.

“Miss Susan, why does he have ice cream for hair?” my 5-year-old neighbor and little buddy Kyle Petrov asked me as we stood beside the truck.

“I don’t know, but imagine if your head was made of ice cream. I’d be at your house all day,” I told him, tickling his tummy as he ducked and giggled.

When Sessa moved to the Shore, his daughter, Dominque, suggested he buy an ice cream truck. He called one of the Conways and was flattered to hear he’d be the perfect fit for this area.

Now, he steers the truck, dotted with colorful pictures of frozen treats, through Berlin and Ocean Pines every day, from 11 a.m. until around 9 at night, often giving away Mister Softee memorabilia, such as caps and temporary tattoos. He’ll be on the streets until October, then return next March.

“I sell about 200 cones a day. We also have sundaes, gelati, ice cream sandwiches, frozen bananas, milkshakes, floats, and we have non-lactose ice cream for people who have allergies,” he said.

Most popular is a vanilla cone with rainbow jimmies, followed by root beer floats and milkshakes.

Customers love the strawberry-banana shakes, fashioned with fresh bananas that are blended with a little sugar-water.

As tasty as the ice cream is, the nostalgia is better.

“I hear it all day,” Sessa said, smiling. “I hear, ‘I cannot believe Mister Softee is here.’ I see it’s going to be a popular thing down here. In Ocean Pines, there’s a guy who comes out every day and buys a vanilla cone. He said it reminds him of his childhood. He says he can’t get enough of it.”

“I’m doing what my father and uncles did. I try to talk to everybody. Mr. Softee makes memories. I’m not changing. I’m going back to the way it was in the ’50s.”