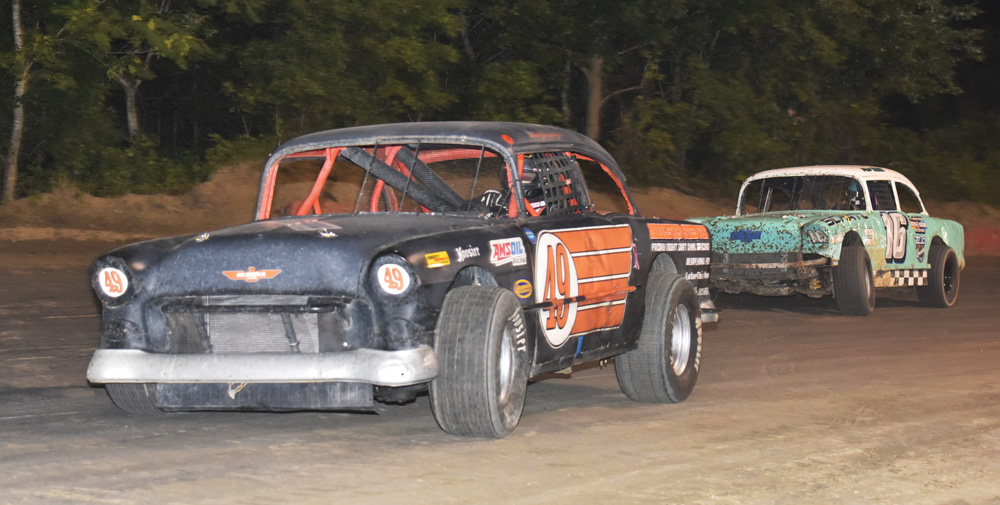 One of the annual highlights of the Sussex County stock car racing season is the Delaware State Police Camp Barnes Benefit Race. The 47th running of the race was last Wednesday, July 10, hosted by Delaware International Speedway in Delmar, where three members of the White family — all sporting No. 16 — earned checkered flags.

“Looking at the numbers, we are good over there,” Det. Jeff Hudson, the state police trooper overseeing race operations, told drivers at their meeting, of the crowded spectator stands. Then, pointing toward the full pits, he added, “And we’re good here.”

At the end of 15-laps, Tim White of Salisbury, Md., topped a field of 11 in the Mod Lite division. White fought off challenges from Brandon Sturgis down to the wire, where just 0.506 seconds separated them.

But, before that, his two nephews, Matt and Sparky, captured wins in Little Lincoln and RUSH Crate Model. “The track was pretty nice tonight,”

Tim White described. “It had just enough grip so I could hammer down on that thing from the center off a little free coming off [Turn] 2. Other than that, the track was pretty nice. It’s not too rough. These cars take a beat-

ing if the track is rough. It worked out tonight in my favor, and I’m happy about that.”

Matt White’s No. 16 Little Lincoln car cruised under the checkered flag, with T.J. Henry trailing him. Georgetown native Melvin Joseph Jr. was third across the stripe. Following Joseph in the top five were Jordan Herbert and Todd Sammons.

“It’s pretty cool to win a Camp Barnes race.” Matt White expressed. “It’s a really great benefit for the kids to go to summer camp. I just want to thank Jeff Brown for letting me drive it. It’s only the second time I’ve driven the car for him. He’s a great sponsor and a great friend. I’m proud to win this race for him.”

A total of 20 RUSH Crate model racers took the green flag. After an exciting 15-lap three-way fight for the front, led by Salisbury, Md.-based Sparky White, Joe Warren was second and Millsboro native Amanda Whaley was a close third. Matt Hill crossed fourth, ahead of Jacob Piper, who capped the top five.

“Tonight was pretty much the luck of the draw,” Sparky White said after his win. “My son was able to draw the pole for me, so that helped us out. We’ve been working on the car, and we found something that helped us on a slick track like we had tonight. Be- tween that and the draw, it paid off.”

Billy Cropper bested a field of 16 in the Delaware Super Truck division.