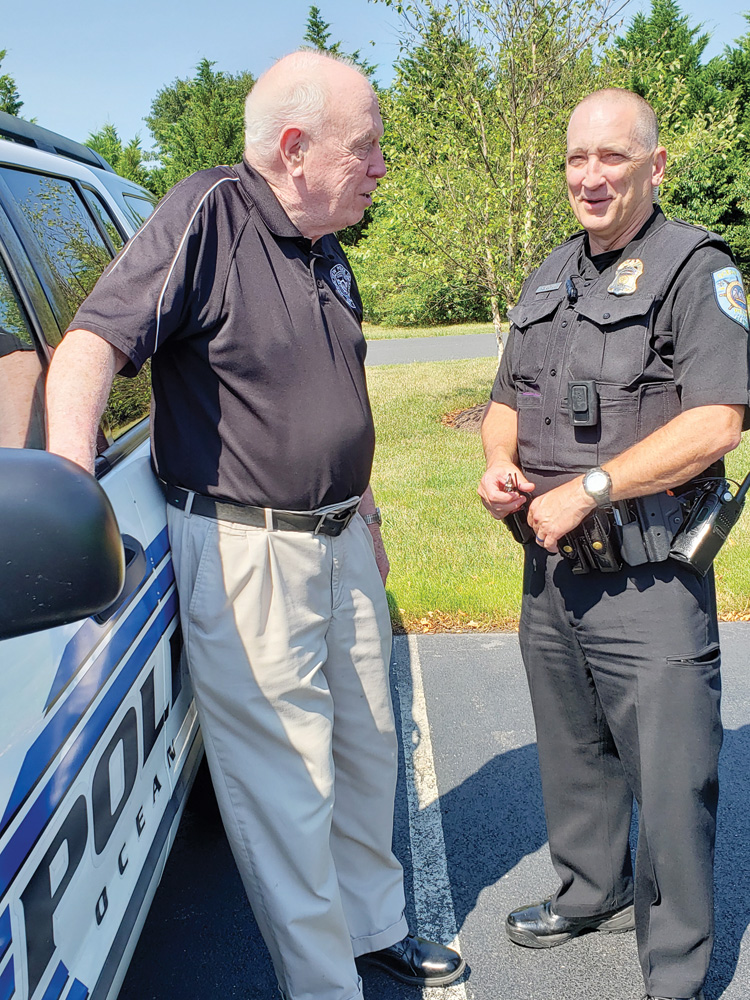 Volunteers step in to help

OVPD bolstered by roster of volunteers

Among the seven volunteers at the Ocean View Police Department, the joke is that one task is of utmost importance: keeping the coffee fresh and the pot on.

“If we run out of coffee, don’t bother coming back. Whatever the chief likes, everybody else drinks,” one volunteer said with a laugh, noting that he’s sure to buy OVPD Chief Ken McLaughlin’s favorite Folger’s Classic Roast when he’s shopping for supplies.

“That’s right. Keep the coffee coming,” McLaughlin said with a smile, as he praised the men and women who volunteer hundreds of hours each month, saving taxpayers money and freeing officers who are busy patrolling.

“These volunteers have proven themselves time and time again to be a critical part of our workforce, especially in light of the fact that as growth continues, demand for services continues,” McLaughlin said.

“They have stepped up and have really allowed the officers to be able to focus on police matters. It’s been a great deal — not just in being able to provide additional services, but in being able to reduce costs. We can keep officers on the road, so it’s a win-win-win, all the way around,” he said.

“I do whatever the chief asks, whatever I’m able to do,” said a modest Charlie Caselli, known as the handyman volunteer.

The 63-year-old Binghamton, N.Y., native rebuilt the department’s worn-out shooting range barricade, with notches and cut-outs, and worked on the trailer that hauls equipment to the range.

“I’ve done some carpentry work before. I was a volunteer fireman in New York for 41 years before I moved here. I joined the fire company here. My son is one of the officers in Ocean View. He said, ‘You know, Dad, we have volunteers. We have volunteer stuff here, too.’ He explained it to me. I figure, the next 41 years I’ll volunteer for the police side,” Caselli said.

On the job every Thursday and Friday from 8 a.m. to 4 p.m., Caselli, who lives in Millville, said he looks forward to his days, especially since he’s retired from road work for a township in New York.

The oldest volunteer is 81-year-old Bill Wichmann, who joined the ranks around 2000.

A former member of the police commission in his native New Jersey, Wichmann was active with that police department.

“As a former commissioner, the first thing you do is meet the chief, so I went to the police department and introduced myself. He and I hit it off, and, out of that, we started talking about the reserve unit. I took him up to Park Ridge, N.J., to see the volunteer unit there. He and I got it started,” he said.

Now, Wichmann volunteers on a regular schedule and said he is grateful for the opportunity, since he’s a recent widower.

“It works very well for me. I’m all by myself at home. It keeps me busy, and I work with a great bunch of people,” he said.

Wichmann, who goes to the police department every morning, Monday through Friday, had a career as a perfumer, working for Procter & Gamble in Cincinnati.

“They assigned me to Pace, an aerosol deodorant. It smelled like kind of a normal fresh, slightly green. I started each morning with guys at the lab, and I had to smell armpits,” he said, laughing.

His oldest daughter and her family live in the Ocean View area. Before his wife, Betty, died, the couple visited, then moved in 1990, to Ocean View, where he later became a member of the town council.

“When my wife was still alive, we enjoyed the area down here. We said, ‘Heck, we don’t need to stay in that busy New Jersey area,’” he said.

John Reddington started volunteering five years ago, after he met McLaughlin when the chief spoke at a homeowners’ association annual meeting.

McLaughlin explained how busy officers were and talked about being understaffed.

“I thought, ‘That guy needs some help.’ I told him my background, and we talked for an hour or two. I started to volunteer. I like doing it,” Reddington said, joking that it’s true that the coffee pot stays hot, “but we don’t get enough doughnuts.”

A 25-year career diplomat for the federal government who traveled around the world, Reddington, 71, a native of Boston, said volunteering keeps him aware of what’s going on in Ocean View.

“It gives you a different perspective from what you might read or hear from rumors. They’re a great group of people to work with. They work hard. It’s varied work. We do whatever the police chief wants us to do. It could be taking targets out to the range or cruising the town, cleaning out the cell block, taking calls, doing dispatching,” he said.

Another volunteer, who asked not to be identified, said tasks include answering phones, dropping off cruisers for repairs, cleaning around the cell block, even carrying out trash. They file documents and help with parking at events like the popular Halloween event, Cops & Goblins.

“I’m retired. It gets me out of the house. It gives me something to do. It keeps the brain going. My favorite expression is, ‘It’s free entertainment,’” he said.

“These volunteers are part of the family here. We owe a lot of our successes to our volunteers,” McLaughlin said.

Police recently held a bike safety checkpoint, and volunteers were involved, ordering lights to attach to bicycles, installing batteries, hauling and setting up tables and chairs, and helping to man the checkpoint.

“We wouldn’t be able to do as many things as we do if it wasn’t for their help,” McLaughlin said.

“They are just awesome.”