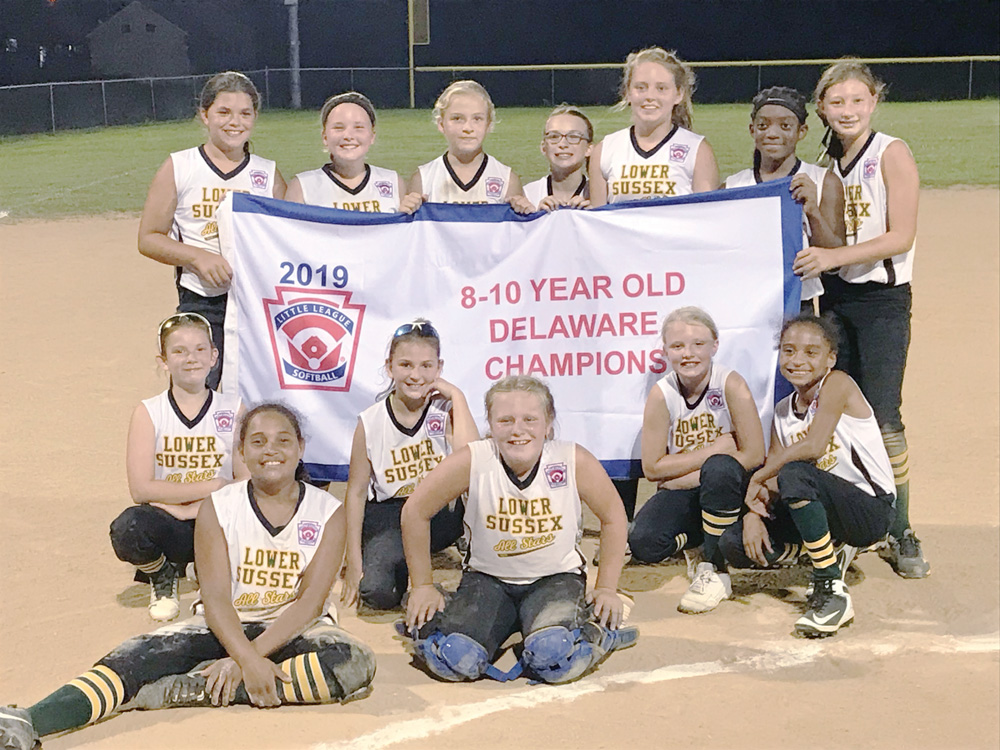 They took their season as far as they could and came away with the ultimate prize.

The Lower Sussex Minors Softball team faced Smyrna in the championship round of the state tournament and came away with a 5-3 win over their counterparts in exciting fashion, to capture the 2019 Delaware state title.

“It’s been an unforgettable experience coming together to learn how to play as a team,” head coach Jesse Bare said after the game. “Even our pre-game cheers needed a little practice. It was so amazing to me to see the girls cheering each other when they got a hit, but also comforting each other if they got out or made an error.”

The Indians fell behind 2-0 after the first inning but never panicked, scoring single runs in each of the second and third innings. Smyrna re-took the lead, 3-2, in the bottom of the third, but again LSLL responded, with a tying run in the fourth.

Parker O’Shields put the Indians up for good with an RBI-triple to deep right-center field in the top of the fifth that gave LSLL their first lead of the game, and proved to be enough for pitcher Cierra Lewis.

The Indians’ fireballer tossed a complete-game win in the circle. She allowed just four hits, and offset four walks with a staggering 10 strikeouts. She also had a hit to help her own cause at the plate.

Offensively, LSLL banged out 10 hits in the game. Addy Clark was a perfect 3-for-3 on the night, with an RBI and run scored. Baylie Williamson added a 2-for-3 effort with two RBIs and scored twice as well. O’Shields finished her night 2-for-3 also, and scored two runs. Lewis, Taygan Conaway and Sophia Bowen each had a hit and RBI for the winners.

“This process has meant so much to me as a coach, because I’ve seen their confidence in themselves grow so much,” Bare added. “As they continue in their softball careers, I hope they never forget the feelings of pride and happiness we felt tonight. We were very proud to represent Lower Sussex and would like to thank our faithful fans for all of their positive support.”

As Bare acknowledged, there was a large contingent of Lower Sussex fans — and not just family members — who followed along on this journey, a testament to type of people that collectively make up the fabric of the LSLL organization.