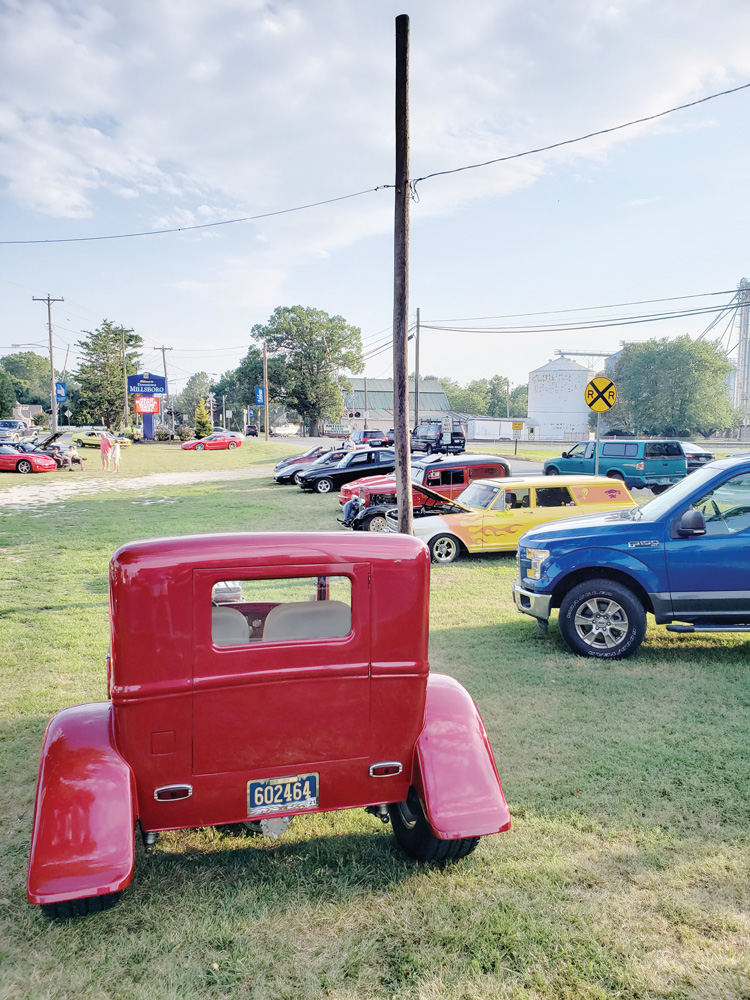 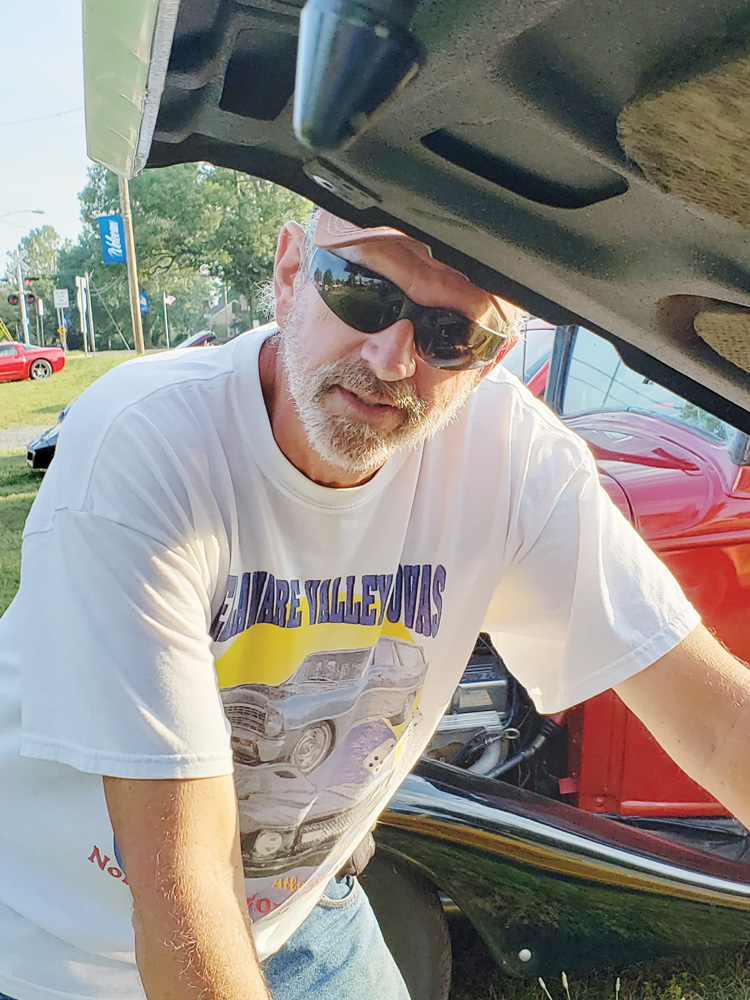 What do dozens of car devotees, gathered with their classics and shiny engines, do on a hot July evening?

They meet at Dairy Queen in Millsboro for cones, conversation and the weekly Cruise In’.

“Most people who have old cars, their car insurance companies want them to run them and not just let them sit. That gives us a good reason to run — run to Dairy Queen. I like ice cream,” said a smiling George Rust, whom everybody calls “Rusty,” as he sat at one of the tables inside the shop, where fellow patrons were ordering hamburgers, french fries and Blizzards.

In March of 2001, Rust asked the owner of Dairy Queen if he could begin the assemblage, and he got a green light. Word spread and 11 car, truck and motorcycle enthusiasts met on the adjoining grassy lot on the first evening. Now, dozens are there on Tuesdays beginning around 5 p.m. During winter months, they meet on Sunday afternoons, said Rust, who has two Novas, a 1964 station wagon and 1963 two-door sedan, as well as a 1979 Impala.

“The people who come are very friendly. We have a DJ who plays old music. We exchange car stories. If somebody wants to sell a car, or needs something, you’ll hear, ‘Do you know anything about Cobras?’ ‘Yeah — talk to this guy,’” Rust said.

Usually, 25 or 30 people are there, lingering until around dark. The pace is slow and easy, and everybody is welcome, whether they have a new or middle-aged car or truck, or classic they spent thousands on, to restore it. Ice cream cones in hand, they mingle, telling stories, remembering the chain of events that led to the purchase, repeating details of who owned it before, what condition it was in, when they drive it, what shows they’ve been to — and, always, how fond of it they are.

“Oh, yes — we love this car, but she’s the most important thing in my life,” said John Kinney of Harbeson, motioning toward his wife, Patti.

“Now you know why we’ve been married 50 years,” Mrs. Kinney said, laughing, as someone asked if the shiny black ’57 Chevy Belair was his or hers.

“It’s ours,” she said. They bought it in 2010. They had a ’68 Camaro but sold it after Kinney became ill with pancreatitis, an ailment that dragged on for five years, making him believe he’d never enjoy old cars again.

Fortunately, there were no lasting effects. The Kinneys bought the Chevy before the stroke, and after he recovered, they had air-conditioning installed, and a fuel-injection system.

“You meet the nicest people at events like this — people like Rusty. Car people have a common thread. When we drive this car, I’ve got it tuned in to all the old songs. You’ve got music on. You’re going down the road, and it’s just like being in that time period,” said Kinney, a retired firefighter who has had 30 or more cars in his lifetime. When the couple married, he had a ’57 Corvette.

“When we got pregnant…” he began, smiling at this wife, who continued his sentence.

“…So we got a family car,” he concluded.

Also at Cruisin’ was a cream-colored ’57 Ford Fairlane 500, a Chevrolet truck, a Ford Mach I Cobra, a shiny blue four-door Ford F-150, ’69 Mustang, a dark green Firebird and a Harley Davidson motorcycle customized for a double-amputee. The seat is a motorized scooter that backs onto a lift that lowers him to the ground, then lifts him back onto the motorcycle.

Roger Massie of Berlin, Md., was there with his brother, Keith, and their two-seat Dodge Viper sports cars.

“They stopped making Vipers in 2017. It’s fast,” he said, flipping through photos on his cell phone until he found one of a Viper show, with the sleek beauties in an impressive line.

“We like to come here because it’s cars and it’s the people. We talk about what they have in them, the engines and stuff,” said Keith, whose Viper is the color of graphite.

Ed and Kathy Schmidt of Milford were there, handing out cucumbers from their garden and talking about their 1972 truck. Schmidt installed an extra gas tank and put on higher springs. A 1940 Ford convertible is also in their collection.

“We come here every two or three weeks. We like meeting new people. We travel all over the United States. We’ve been as far as Colorado, St. Paul, Kalamazoo,” Kathy Schmidt said.

Her husband, who built one of their prized vehicles piece by piece, said the skill might come from his former job of working with packaging, as the disc jockey played, “Hello, Mary Lou.”

“This music we’re listening to? I used to dance to this music,” he said, breaking into a grin.

Memories coasted through the grounds, like the one that makes Rust’s eyes twinkle. When he was 13 years old, he kissed a pretty girl named Denise in school.

The most memorable Cruise In night, he said, was Sept. 11, 2001, now known as 9/11, when the United States was attacked. A car event was planned for that evening, but after the attacks that morning, organizers talked about canceling it.

“But I didn’t know who to call. Who would I call? I didn’t know who was coming. So, we figured, we’d either have it and nobody will come, or somebody will come. Well, 122 cars showed up that night. We had a Vietnam veteran here, walking with an American flag. The Blades Fire Company truck came here, stopped in to help out with the ceremony, then left to assist in New York,” Rust said.

“I still get chills when I remember it.”

Chuck White was standing beside his 1940 Studebaker Champion.

“I had to do quite a bit of work on it. It was running bad when I got it. I put, as they say, new shoes on it,” he said, pointing to the tires.

Charles Williams of Harbeson, who lost both of his legs, was on the customized Harley.

“I come here a couple times a month,” he said, explaining the kit to modify the bike came from Kansas. He engineered it with the help of friends.

“There was a while when I never rode, but you don’t know what you’re missing. It’s a piece of freedom.”