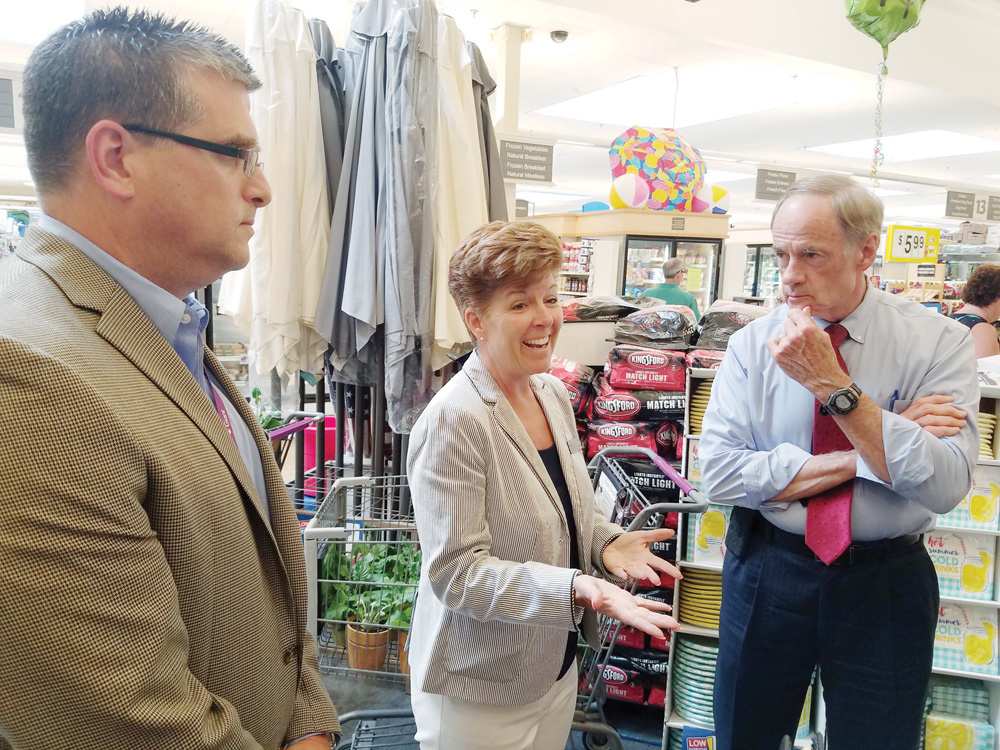 On the surface, most people just see expensive medical and pharmaceutical bills. Most people don’t know the intricacies of medical pricing. But U.S. Sen. Tom Carper swung through Millville on Friday, July 12, to discuss one piece of the puzzle at the Giant food store and pharmacy. Company representatives said behind-the-scenes fees have made running a pharmacy almost impossible at times.

“People think pharmacies are making a ton of money, and we’re not. Over the last seven years, our profits have diminished to the point where we’re making hard choices,” said Paul Zvaleny, Giant’s director of pharmacy operations.

Such businesses are trying to survive with fewer staff or shorter hours, he said, and in desperation, small and independent pharmacies have been more likely to close altogether.

When pharmacies exit the business, that’s fewer options for the public. Pharmacists are considered especially important because they’re considered to be the most accessible of healthcare professionals. Many drug stores are open almost daily and later into the night.

“Call your doctor at 8:30 at night, see how fast you get a response,” Zvaleny said.

They’re also a last precaution to catch when patients might be inappropriately mixing meds, and they provide some counseling on drugs, nutrition and diabetic management services.

Of particular concern to the National Association of Drug Stores is Direct & Indirect Remuneration (DIR), which started through Medicare, but passes through insurers to the pharmacy.

If people taking their medications correctly, all is well, said Kelly Shanahan, Giant’s regional pharmacy manager. Presumably, if a person takes their daily pill, as prescribed, they have less chance of an incident. If someone skips dosages in order to stretch the supply and save money, they risk a medical episode that can cost the overall health system more time and money.

But that’s also turning into a penalty for the pharmacy. They didn’t sell as many pills as anticipated because people are skipping doses, which results pharmacies losing rebates. Pharmacies are literally paying back lots of money each year in DIR fees, Zvaleny said. That snowball effect that could increase future costs, too.

Carper said he is focused on affordability for the public and cost-effective results for businesses.

In June, Carper signed his name to a congressional advocacy letter to President Donald Trump in which he and several colleagues expressed disappointment in the Trump Administration’s failure to finalize DIR fee reform for the 2020 plan year.

But he made no promises to the Giant reps about co-sponsoring fair-pricing legislation, which is in committee.

This spring, Carper was an early cosponsor of legislation to reduce surprise medical billing (also known as “balance billing”), in which patients receive unexpected and sometimes exorbitant fees for medical service. The STOP Surprise Medical Bills Act (S.1531) is currently in committee, boasting 26 co-sponsors in a 50/50 bipartisan split.

The act would mostly tighten up billing for some out-of-network fees. Plus, if insurers and hospitals disputed particular fees, there would be a better dispute resolution process — the two parties couldn’t just throw their hands up and pass the extra costs to the patient.