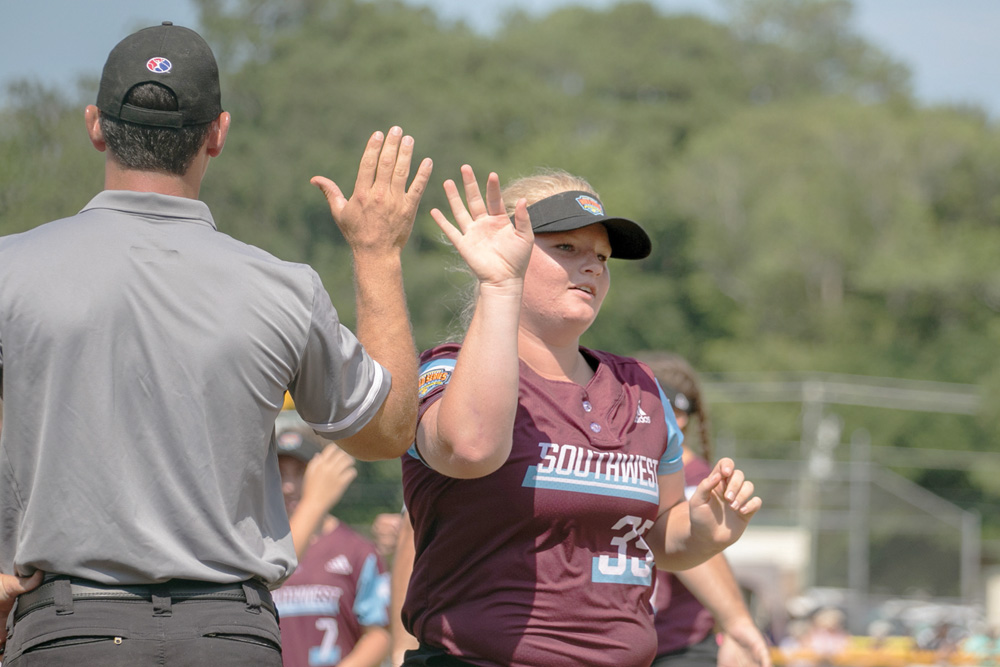 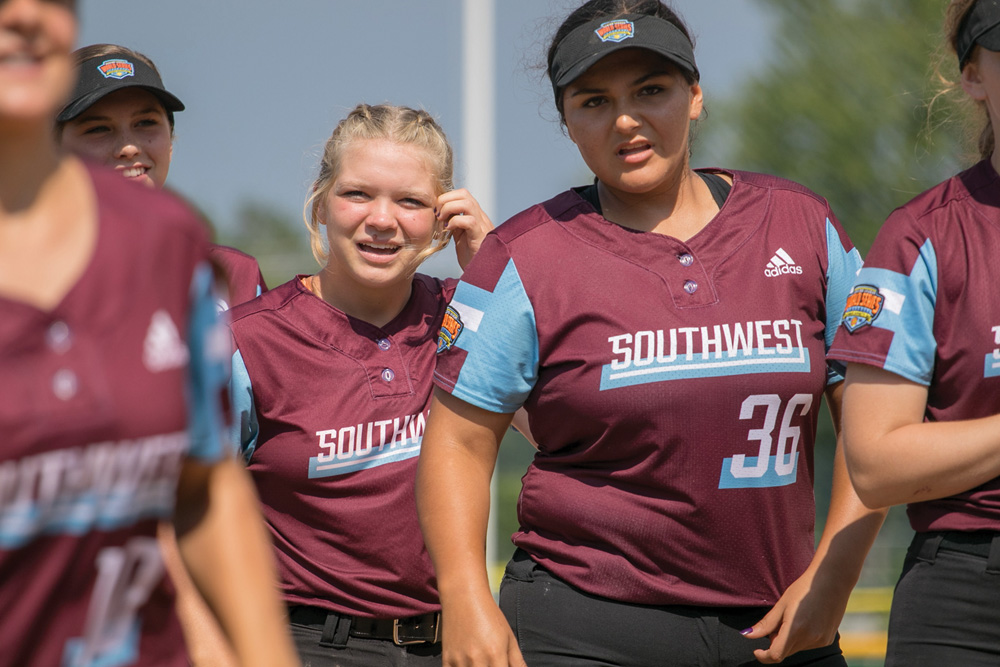 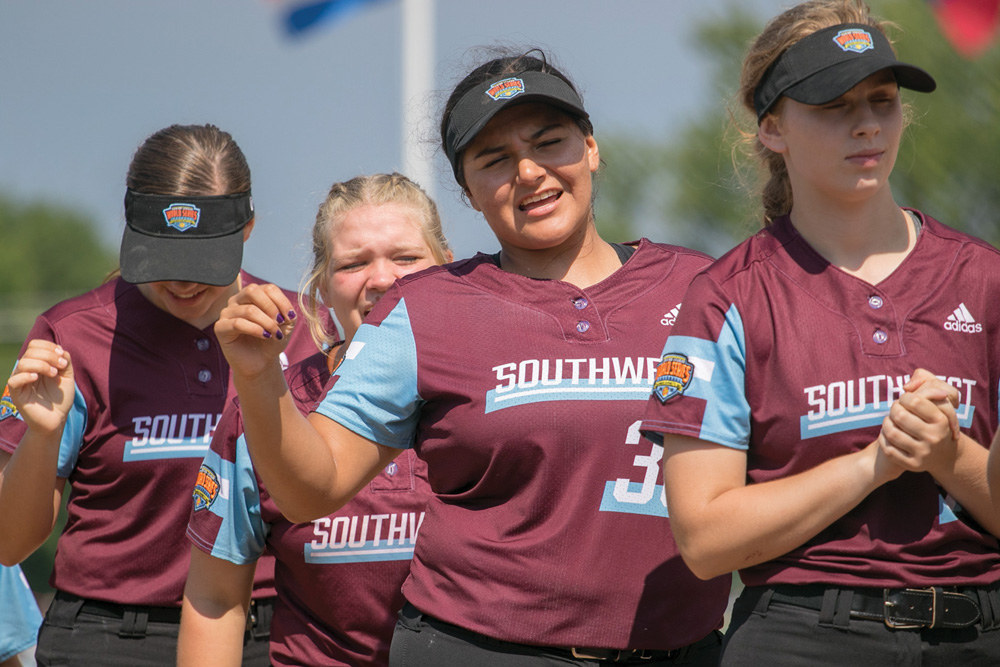 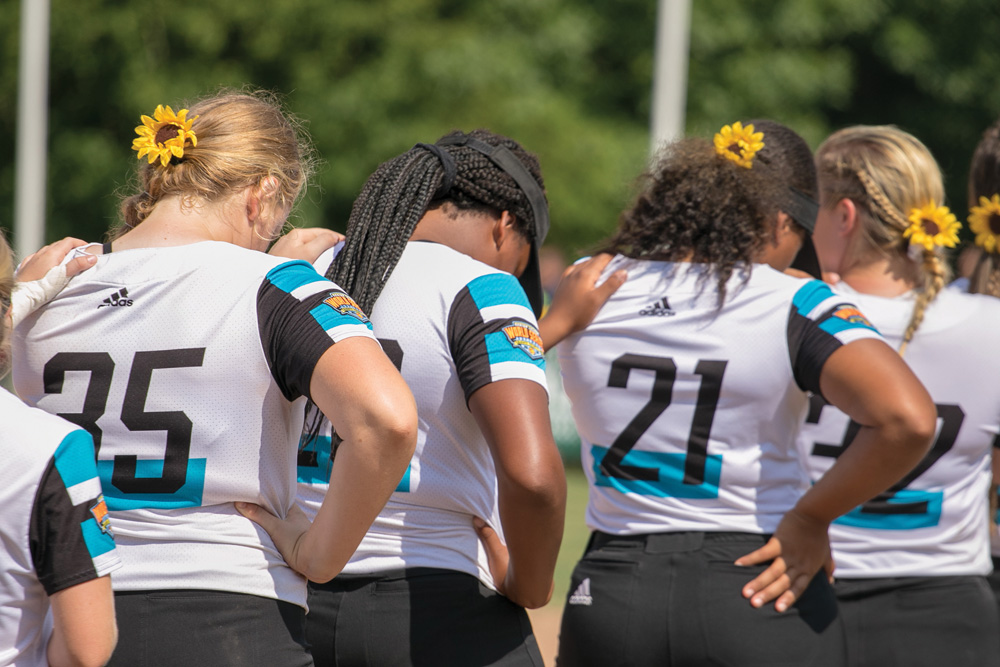 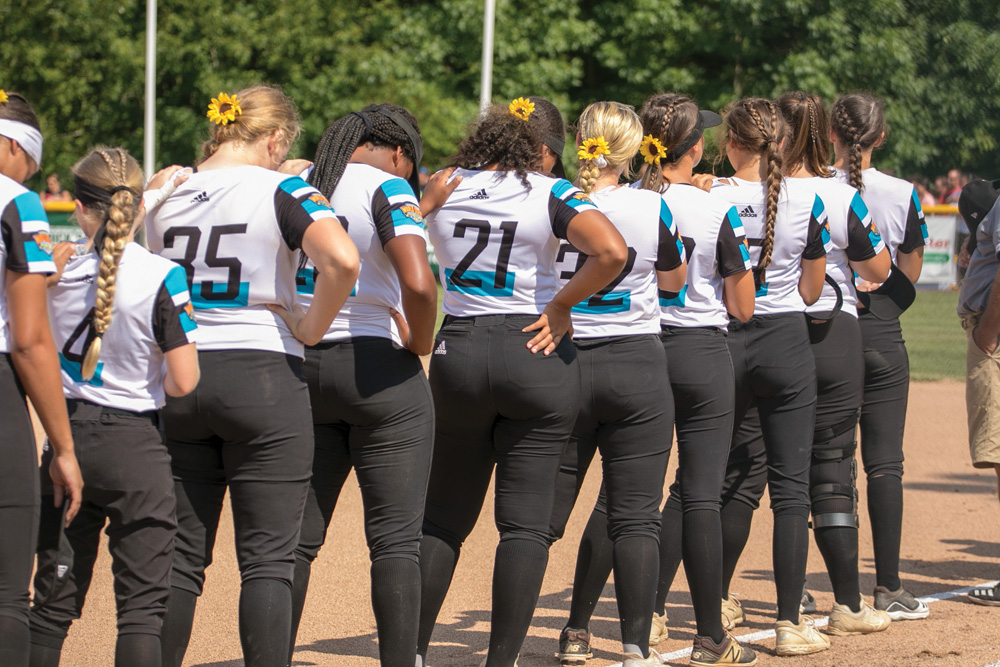 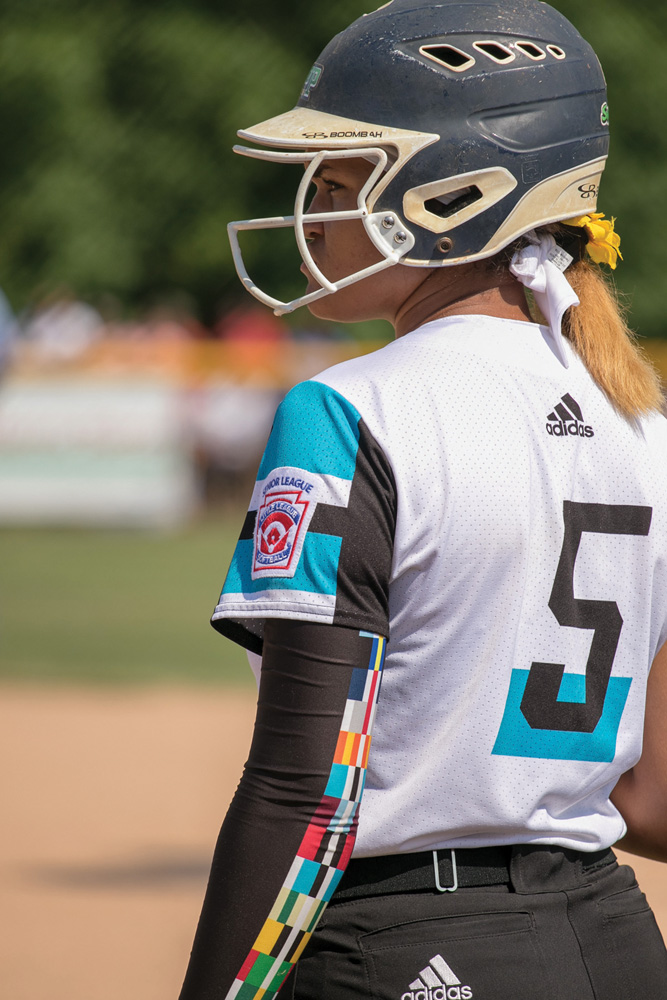 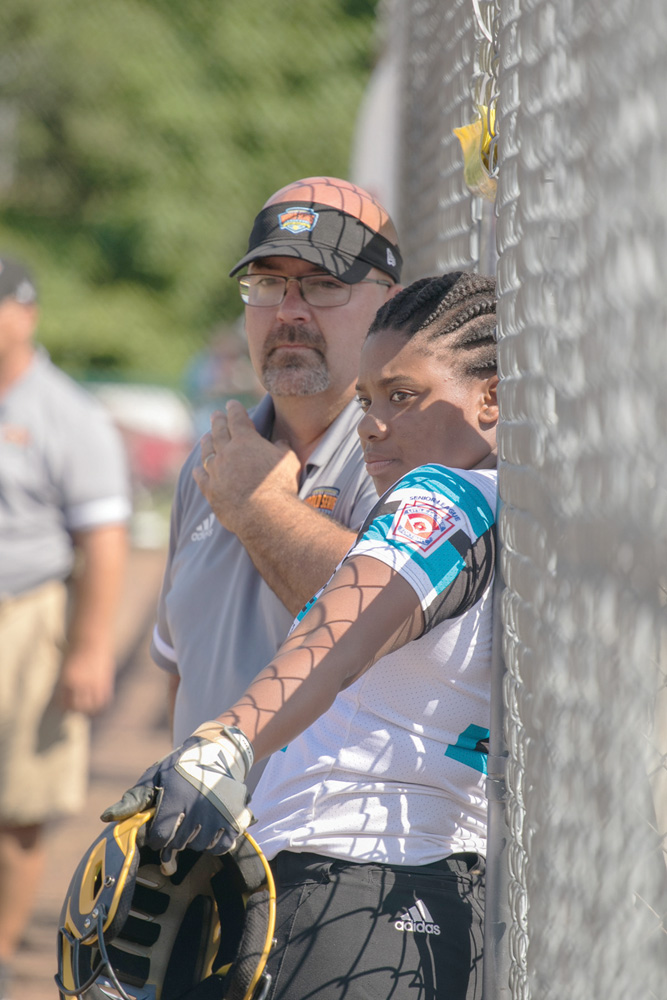 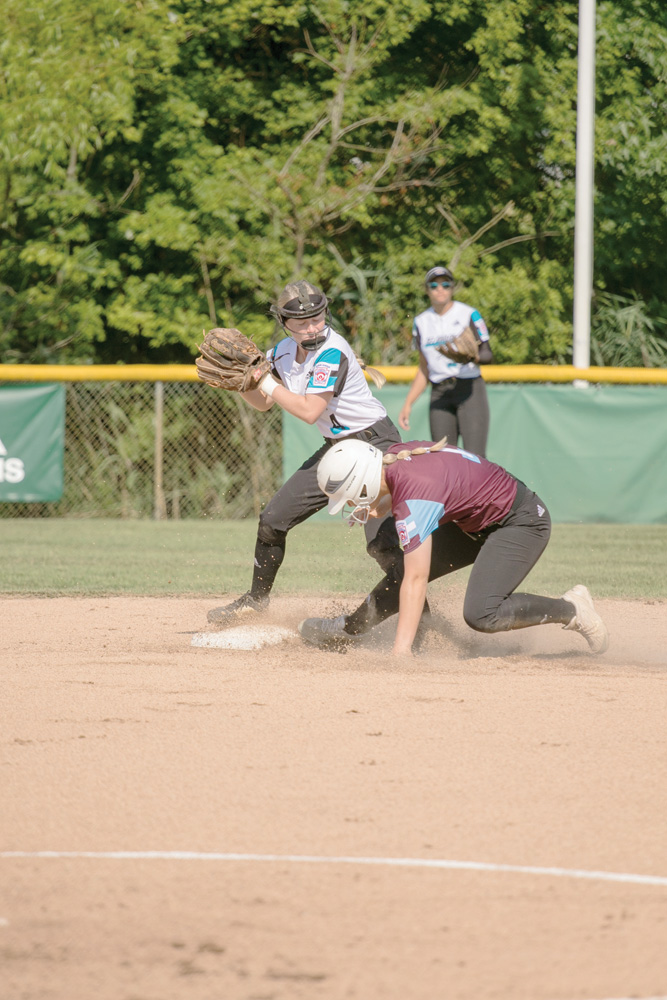 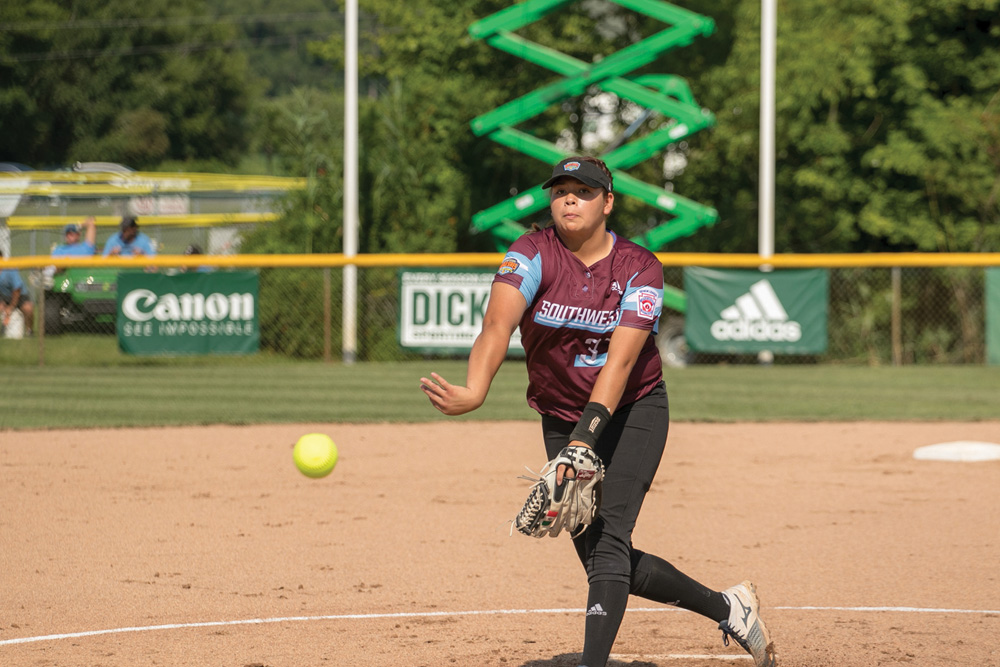 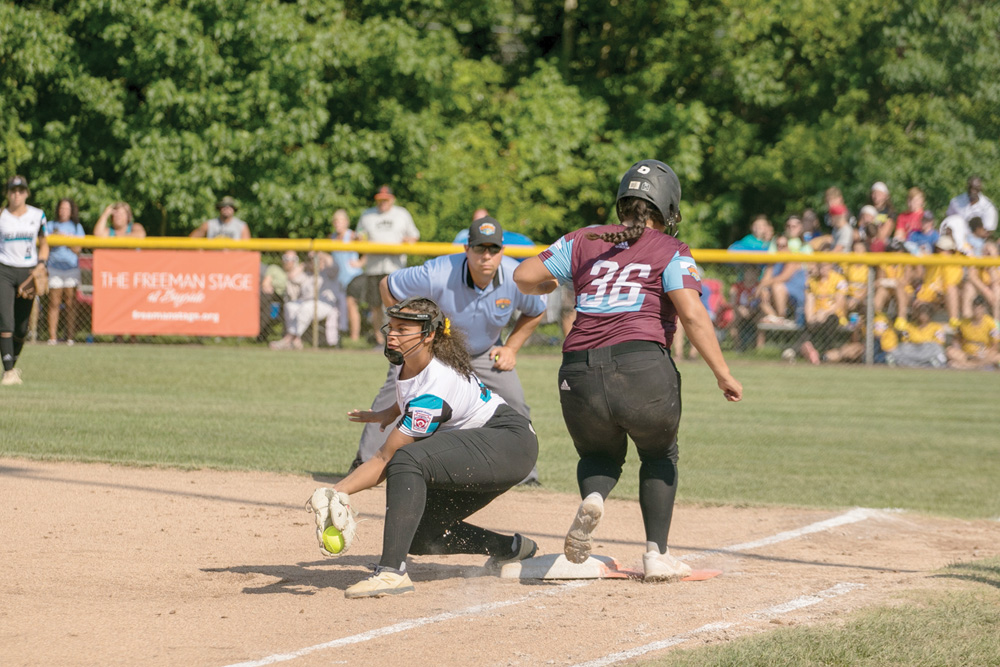 They almost pulled off the unthinkable. Well, certainly not many had given them a snowball’s chance in summer of even making it to the finals.

However, the Host District 3 team — featuring members of Millsboro, Laurel and Nanticoke Little League groups — played stellar softball all week long, en route to reaching the championship final of the Little League Senior League Softball World Series. But their hopes of bringing home the title came up short in a 7-5 setback to the U.S. Southwest team from Waco, Texas.

In the final, weather delayed the start of the game by nearly two hours.

When it finally started, District 3 actually jumped out to a 2-0 lead after the first inning, thanks to a two-run double off the bat of Jada Evans. For the week, Evans batted .542, with two home runs, four doubles, six runs scored and seven RBIs. In the circle, she went 4-2 overall, with a 3.16 ERA, with 28 strikeouts over her 31 total innings.

The Southwest squad was unfazed by the early deficit and recovered to score three runs in the third and two more in the fourth, to take the lead for good. Those runs were also helped by three District 3 errors.

Kate Evick went 3-for-4 for District 3, with three runs scored and an RBI. Evick finished her first World Series appearance with a .375 average that included three home runs, eight runs scored and six RBIs. In her 49 total chances behind the plate — where she caught every inning as the team’s catcher — she made just two errors, for a .959 fielding percentage.

Carlie Venables had a solid showing in the championship round with her 2-for-3 effort. She also scored twice. Kaegen Brittingham, Saige Bullock and Tatum Otwell had the other hits for District 3 in the final game.

For Southwest, the win avenged an earlier loss to the locals in pool play, and gave them their first World Series title.

Madalyne Martinez went the distance in picking up the complete-game win. She allowed all five runs on 11 hits with 10 strikeouts. She was a perfect 3-0 during the week, with a 3.08 ERA.

In the third-place game, Asia-Pacific scored once in the first and another in the third, which proved to be plenty for pitcher Kacelyn Valino in their 2-0 win over U.S. Central from Grand Rapids, Mich.

Valino pitched all five innings of one-hit ball, with 12 strikeouts before a torrential downpour forced the cancelation of the final two innings. She was 4-1 overall for the week, with a 2.17 ERA and 61 strikeouts, which was the highest total for any pitcher in the tournament.

Danica D.S. Aquino and Angel Joana M. Pascual each had a hit and scored a run in the game. Sydney Carr had the lone hit for Central, while Paige Stroster was the hard-luck loser. She allowed just the two runs on two hits.

Couri Smith smacked what proved to be the game-winning home run in the bottom of the sixth inning, to put District 3 into the final. It was Smith’s lone hit of the game but couldn’t have come at a better time for the team’s leadoff hitter.

Evick and Evans each led the way offensively, with two hits apiece. Evick also scored three runs and knocked in two others.

Peyton Perrin was an impressive 4-for-4, while Alyssa Braam had two hits to lead Central at the plate. For the game, Central out-hit District 3 by a 10-9 margin.

District 3 did not help themselves defensively, committing four errors in the game.

Southwest scored early and often en route to the win over Asia-Pacfic in the second semifinal contest.

Both teams banged out 13 hits in the game.

Five different players had multiple-hit efforts for Asia-Pacific, with Aquino leading the way with her 3-for-4 performance, with three runs scored from her leadoff spot. Maria Reuel Caoagdan, Nickole Dela Cruz, Biangca Navarro and Valino each had two hits.

The team from Florence, S.C., playing its first-ever season as a chartered Little League team, ended their inaugural season with a win in the consolation round of the World Series, thanks to a 9-7 decision over Canada.

A four-run top of the seventh inning was the saving grace for Southeast. Payton McLeod, Mia Boykin, MaKayla Arceneaux and Sydney Holland each had two hits for the winners, who finished with 11 total hits in the game.

Sydney Jacobs picked up the win in the circle with 2.1 innings of shutout relief, allowing three hits to going along with three strikeouts.

Mackenzie Wildy swung the big bat for Canada, going 4-for-4 with three RBIs, while Sophie Gulney chipped in with two hits.

Already holding a 5-3 lead late in the game, Europe-Africa put the game away for good with a six-run sixth inning for the win.

Europe-Africa managed just eight hits in the game, with Carmen Dijkhuizen and Renske Catsburg both recording a pair of hits.

Jaycemarie Fernandez-Rodriguez had two hits for Latin America, which finished the tournament without a win — the only team to go winless over the course of the week.

East turned an 8-6 deficit into a one-run win, thanks to two runs in the seventh, forcing extra innings before scoring the game-winner in the top of the eighth.

Wolak picked up the win in the circle, tossing all eight innings and allowing the eight runs (six earned) on 10 hits, with six strikeouts.

The first four hitters in the West lineup were impressive offensively, despite the loss.

• Champion Southwest finished with the best record over the week, with a 6-1 mark over their seven games. The team batted .349 overall, with 14 doubles and eight home runs. They scored a total of 67 runs for a 9.6-runs-per-game average.

• Host District 3 wrapped up with a .318 average for the week, with their 5-2 overall record. They scored 42 runs, for a 6.0-runs-per-game average. The locals banged out 13 doubles, a triple and seven home runs.

• Central was the third team to finish with a 5-2 overall mark for the week. Their offense managed a .320 average, with 14 doubles, two triples and five home runs. Central scored 46 total runs for a 6.6-runs-per-game clip.

• Of the remaining six teams, none had a winning record. Canada and Southeast finished with 3-3 marks. East wound up 2-4, with Europe-Africa (1-4) and West (1-5) each managing just one win. Latin America was the lone winless team.

• Latin America struggled in many facets — especially offensively, where they collectively hit .190 as a team. They had just four doubles and two home runs among their team’s 24 total hits. Latin America scored just 11 runs, or 2.2 runs per game on average.