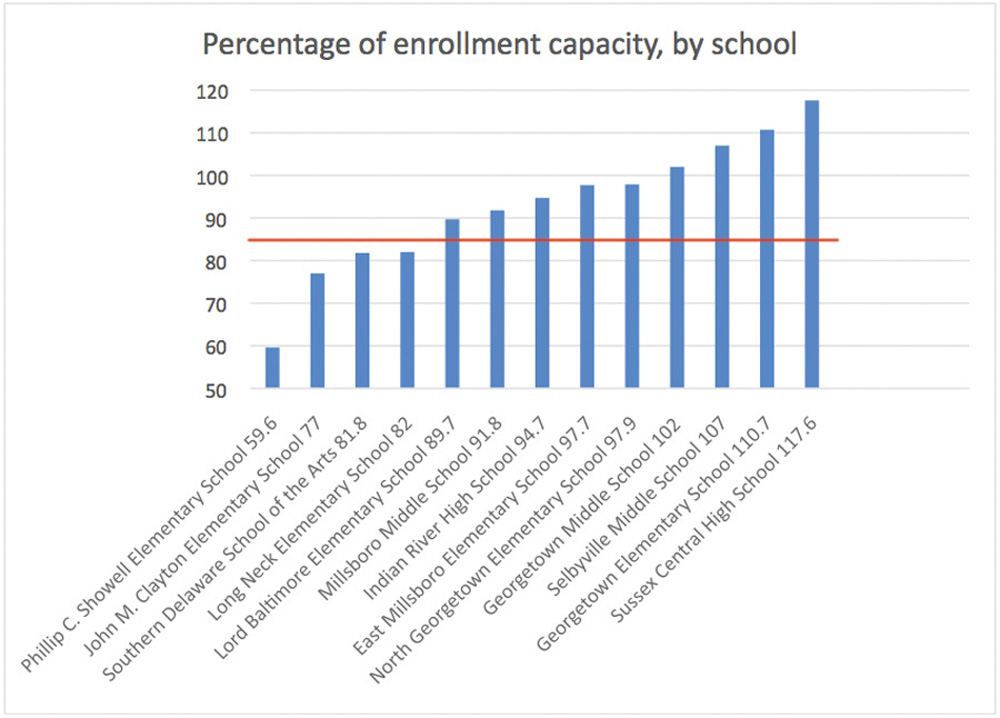 IRSD locks down school choice in nearly all schools

School choice is not a guarantee.

Indian River School District officials made that statement loud and clear in July, when the school board rejected school choice applications to all but three schools.

With that shift, if families move outside the district, they are far less likely to be offered a spot at their former IRSD school. Students who live in Millsboro but want to attend school in Ocean View won’t have the same leverage as before.

Of course, anyone who lives in a school’s own geographic zone is guaranteed attendance at that local school. Anyone else must rely on school choice.

“When are we going to step up and say, ‘You moved from the district — you’re no longer in Indian River School District, and you need to go back to your school’?” Leolga Wright asked her fellow board members.

“I’m not trying to be a bad person,” she emphasized, but Wright said she wants residents of the “Indian River School District get the best education and the best faculties that they can have here,” and avoid the impression that other families are gaming the system. “I think we need to put a moratorium on school choice.”

The school board voted unanimously that, in the future, they’ll abide by the most stringent side of their school choice policy: student applications will only be accepted for schools at 85 percent or less of their enrollment capacity, and everyone else can go on a waitlist. (Board Members Rodney Layfield and W. Scott Collins were absent from the school-choice discussion and vote.)

The school board votes monthly on school-choice applications, based on recommendations by the principals and a school-choice committee. But, still, every few months, the board gets stuck in the weeds in a discussion about enrollment capacity, “kicking that can farther on down the road, and it’s getting worse,” Wright said.

A single word has given IRSD that headache: that the school board “may” reject an application because of a lack of capacity in a particular program or school — meaning the school is at 85 percent or more of enrollment capacity.

“That has given us that tiny window in very extreme circumstances where we can allow it,” but the school board has bypassed that 85 percent mark for years, Board Member Heather Statler said after their July discussion and application decisions. “I continue to struggle with us not following our own policy.”

Who has a right to attend?

Schools are designed to comfortably hold a certain number of students. Capacity is typically measured by the overall school building, not by individual programs or grade levels. That makes things tricky for schools such as Sussex Central High School, which wants to recruit into its International Baccalaureate academic program, but where the 118-percent-of-capacity enrollment rate means the general population can barely fit into the cafeteria.

Between the State and the school district, there is a ranking of priorities for accepting school choice, including returning students (Priority 1), siblings of existing students, children of district staff and more.

Hudson and Board Member Gerald Peden also warned against the board even accepting Priority 1 students in congested schools — especially since they had also recently made the difficult decision to reject 13 IRHS students from attending the SCHS IB program, due to school capacity.

“It appears that we are picking and choosing,” Wright agreed. “At some point in time, we’re going to have to buckle down and make the decision to say, ‘We’re not going to have school choice anymore.’”

Additionally, IRSD leaders have spent the last three years planning for growth and asking for additional buildings. They have to lock it down, Wright said.

For example, this summer, some IRSD students who recently moved to Laurel and Milford wanted to continue attending their original IRSD schools.

Students who move during the school year are automatically allowed to finish the year. With good behavior and academics, they can then get the principal’s recommendation for their annual school-choice application for subsequent school years. “Returning students” have the best chance of scoring their school of choice. But that’s not even a guarantee anymore.

“Over the years, we have been very generous over school-choice students, but due to the capacity of our buildings, school choice is not a guarantee,” said Preston “Pep” Lewis, administrator of student services for the district.

“What happened to way back when … you went to school wherever you lived?” Statler said. “So, if I lived in Ocean View, I went to school at Lord Baltimore. … School choice wasn’t meant to throw the whole system out of whack.”

For instance, Phillip C. Showell Elementary School is barely at 60 percent capacity, while Lord Baltimore Elementary School parent pickup is backing up Route 26 traffic on a daily basis, with the school at more than 89 percent of its capacity.

People request school choice for many reasons: they moved away from the school or district, but wish to keep attending; they or a friend teaches at the school; they perceive it as a better educational option; or their work or daycare is nearby.

“I am extremely empathetic to that situation. I understand the stress that it causes families down to the wire, not sure what school they’re going to be going to,” said Statler.

But she scorned the idea that any school is so substantially better than another:

When families submit the online forms, all school-choice applications go to Pep Lewis’ office. He and the board have gotten plenty of angry phone calls on the topic.

“And what I have explained to them is … we have to abide by those [rules]. And I completely understand the frustration of parents, but school choice is not a guarantee.”

“I know people are upset,” Statler said. “I, myself, as a parent, have had children in two different schools. I work all up and down the state. It is so difficult to balance schedules with kids. But at the same time, I also took an oath as a board member to try to make decisions that are responsible for growth in our buildings.”

The IRSD school board had previously looked at school choice as a perk for in-district students to move around the district, or as a way to recruit outside students when so many seemed to be leaving for private or charter schools.

“I don’t feel like we have that luxury at this moment because there’s so much imbalance in buildings in our district. I feel like we need to stabilize,” Statler said.

The IRSD has slowly been shaking out the out-of-district students and siblings who have been moving through the system. Now, it’s the natural growth of Sussex County that is causing rapid enrollment growth. Housing developments are being approved in every school attendance area.

In July, board members also asked why lower-priority students were recommended to kindergarten. Even if enrollment is down now, registration continues until the first day of school.

“I think we get into these situations because we don’t look ahead. We look right now,” Statler said of future overcrowding in older grades.

On this point, Superintendent Mark Steele did defend the elementary-school principals. Each April, schools have an idea of how many students to expect — and therefore, how many teachers to start hiring — for the following autumn.

But, “You’re going in blind with kindergarten. You don’t know how many kindergarteners you’ve got” until the Sept. 30 unit count. “If you wait too long, you’re going to have trouble filling [jobs]. If you’ve got staff hired, what are you going to do with them?”

The IRSD can move around teachers after that, but ideally, teachers want to set up their classrooms before the school year begins.

“I am adamantly opposed to moving kids around just to keep teachers that we hired in a certain building. … I think that’s part of the normal process of what happens before school begins,” Statler said after the meeting.