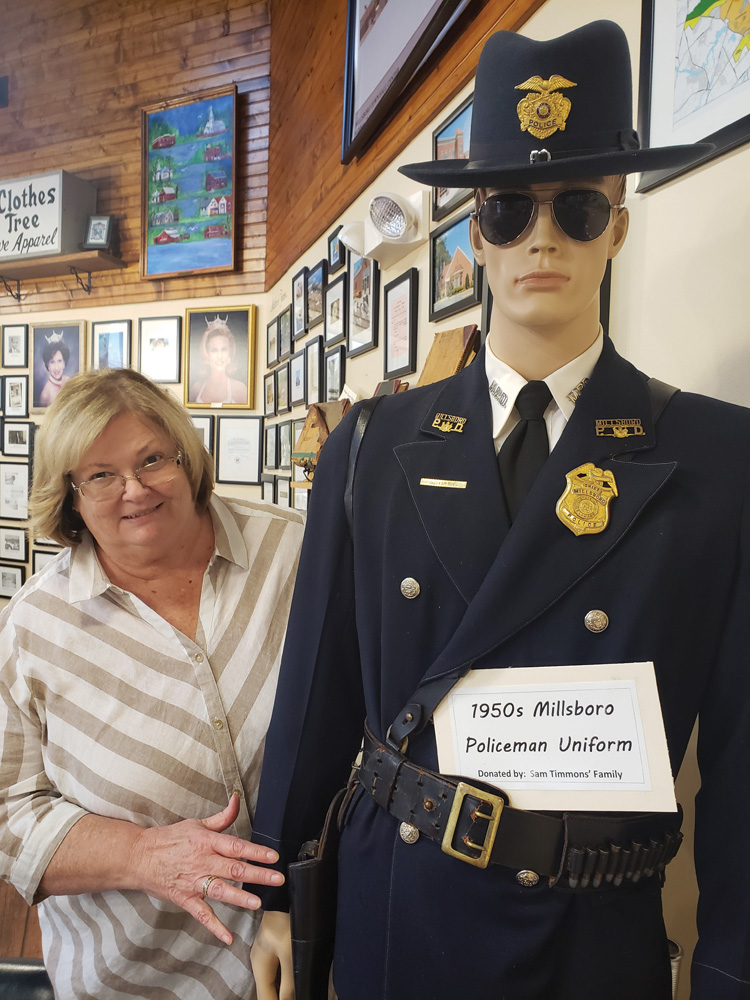 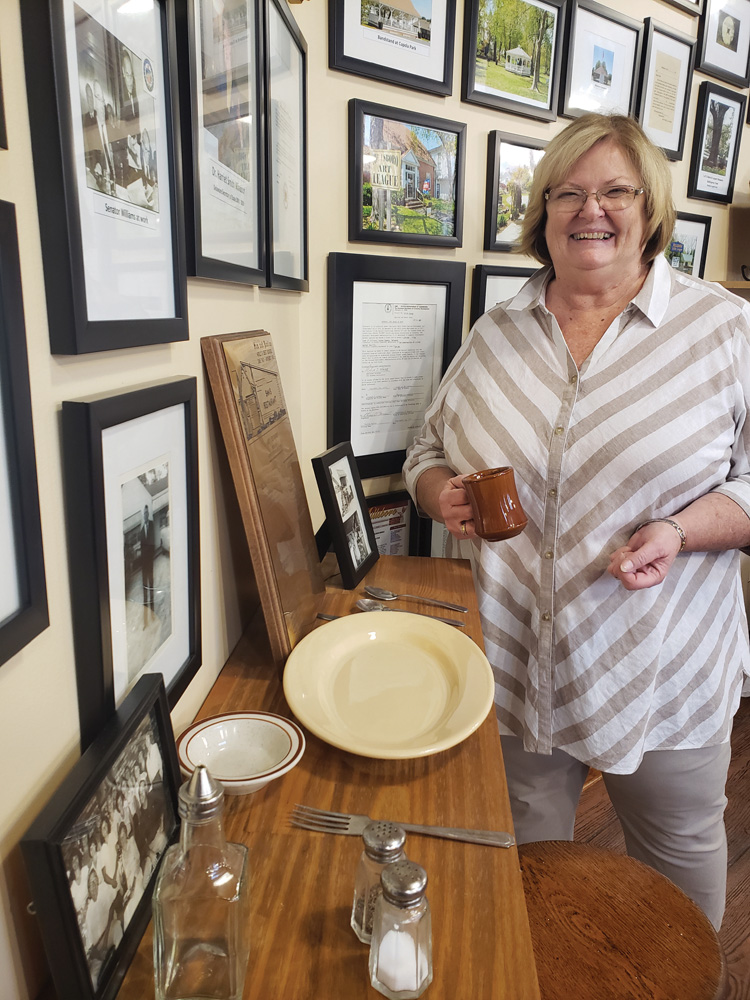 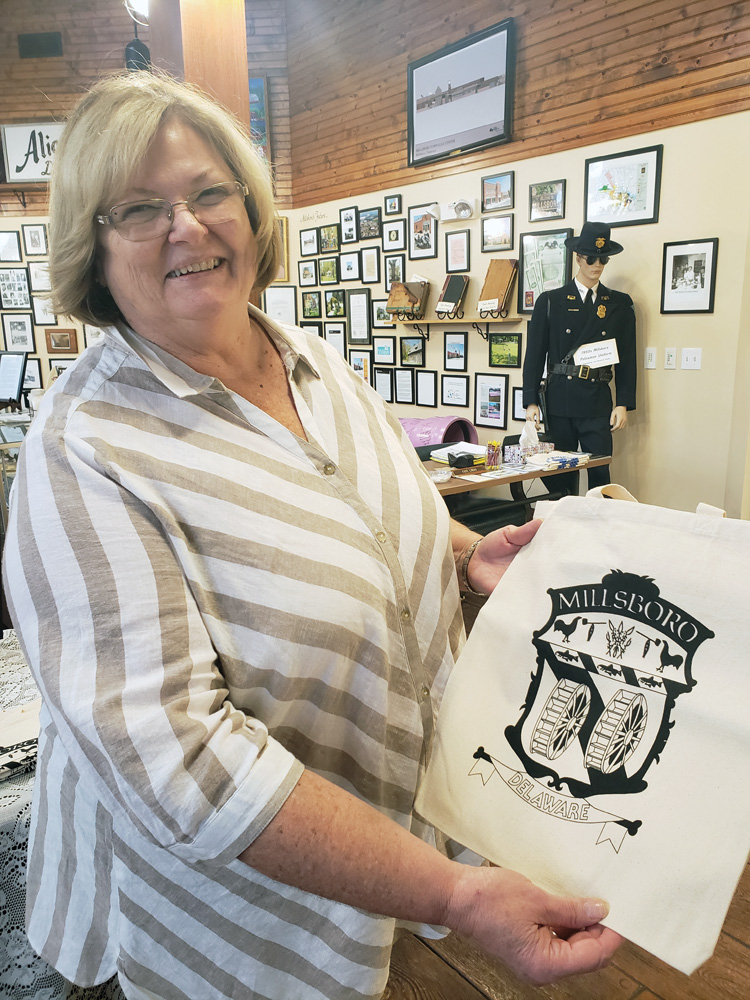 Among the many gems in charming Millsboro is the little museum, nestled inside Town Hall.

It’s a single room artfully arranged and filled with photographs, books, clothing — even a cannonball made where the iron foundry once stood — that trace the town’s history from 1909, when it was incorporated.

It’s an intriguing delight, especially when the director, Faye Lingo, shares anecdotes as she explains the significance of items carefully preserved during the years, many donated and displayed in cases provided by pharmacies and other businesses.

“Michelle Truitt put it together. She was on the town council at the time. She’s a teacher, so she worked on it during the summer. I think she got her daughters to help. That was in 2013. This building was remodeled, and they added on a room for the museum,” Lingo said.

This summer, Truitt was voted mayor of Millsboro by fellow town council members, making her the second female to have that position in the town’s history. The first was Thelma Monroe, in office from 1979 to 1994 and highly respected. Now a nonagenarian, she still lives in Millsboro. Her husband, Walter, was mayor in 1966 and 1967.

A town plot from July 1929, on display, has lines drawn for a much simpler Millsboro than today’s growing town. There are images of a team of mules ready to leave Washington Street, of Main Street in 1923 and of Capt. Theodore Burton, a well-known ship captain.

Ordinances from the early 1900s warn of penalties for breaking streetlights, spitting on sidewalks, obstructing sidewalks or injuring trees, with fines in the $5 to $10 range.

Section XVIII states, “Any person or persons keeping a disorderly house within the precincts of the Town of Millsboro will be deemed guilty of a nuisance and shall, upon conviction before the Alderman, be fined ten dollars for each offence.”

Section XIX addresses gambling with this stern wording: “Any person or persons keeping a house within the town of Millsboro, wherein gambling or playing of Card Trap or any other game of chance or hazard, is allowed, shall be deemed guilty of a nuisance and any and all the inmates therein shall be deemed equally guilty with the proprietor or proprietors and all upon conviction before the Alderman be fined ten dollars for each and every offence.”

There was a law against driving an automobile “at a greater speed than eight miles per hour through any street, lane or alley of said town” and a rule that circuses or menageries interested in exhibiting would be charged $25, or $5 “for exhibitions of a smaller nature.”

A quilt fashioned in 1976 by the Grace United Methodist Women’s Auxiliary is on display, as are old dresses worn at the town’s bicentennial celebration.

Professional baseball player Huck Betts, a Millsboro native, returned after retiring from baseball, opened a theater and named it the Ball Theatre. Born Walter McKinley Betts and nicknamed “Huck,” he was a pitcher for the Philadelphia Phillies and Boston Braves. Born Feb. 18, 1897, Betts, who was 5 feet, 11 inches tall, died on June 13, 1987, in Millsboro.

There’s a sign from prominent businesswoman Alice Hudson’s store. Four of her dresses from the early 1900s are neatly preserved and fitted on mannequins.

Resting on a dropleaf table is an old, manual Smith Corona typewriter near stools from the old Ebi’s Diner.

A likeness of Carey’s Paint & Frame Shop downtown led Lingo to explain that the current owner’s mother and father had started the business, selling art supplies. It’s still open as a frame shop.

Millsboro is the birthplace of two young women who were named Miss Delaware, Letitia Pusey and Alison White.

The Coastal Point newspaper has a place there, too. One article focusing on town hall renovations was published in 2012, and another has the headline, “Award-winner water treatment plant to green the grass and the environment.” Sussex County Post articles from 1973 were preserved, as well.

Books containing town council minutes from as early as 1909 are on display, but fragile after all these years, as is the original handwritten town charter from 1909.

Walking through the museum, Lingo pointed out a picture of Collins & Ryan, a company on Main Street that once sold gas and propane. Nearby is an old wooden school desk with books on top, among them the classic “Heidi” by Johanna Spyri.

A mannequin is dressed in a police uniform worn by Officer Sam Timmons, who also owned a restaurant. A place setting from that eatery, complete with silverware and salt and pepper shakers, is also on display.

A police officer, who Lingo said was also employed by Public Works, is immortalized in a snapshot. “He did it all,” she said with a smile.

“At that time, we probably only had one officer. He probably kept the teenagers straight,” she said.

“People who are new to the area come to see the museum, and people from outside of town. We’re open on Wednesdays from 9 in the morning to 12:30. We have it on our website and there’s a sign out front. Some weeks nobody comes, and other times people stop in to see it,” said Lingo, former town manager of Millsboro, who expertly brings the treasures to life as she conducts informal tours.

“There’s a lot of history here,” she said, glancing around.

“It’s interesting to see these things and how they lived back then. And for some, it’s kind of nostalgic.”