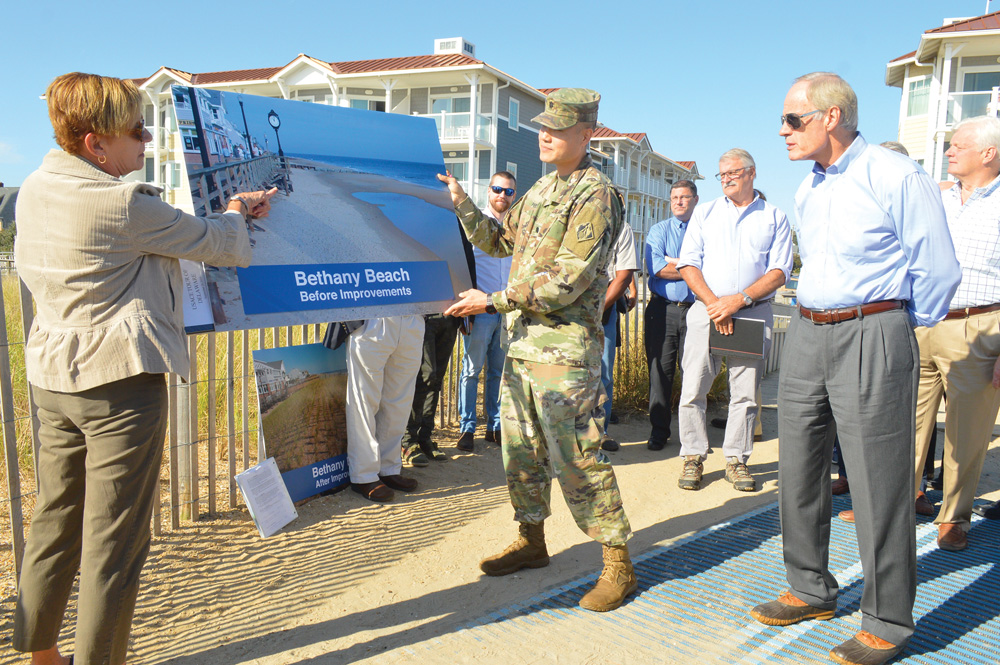 Sand is the sacrificial defender of Delaware beach towns. By rebuilding the dunes and beach every few years, the state and federal government are aiming to protect local infrastructure from coastal storms.

Since Lt. Col. David C. Park became the new commander of the Philadelphia District of the U.S. Army Corps of Engineers (USACE) in July, he was invited to tour some of the infrastructure projects that his unit oversees.

“We do take this very seriously and always welcome comments,” Park said from atop a Bethany Beach dune on Sept. 20.

“This is our challenge,” just like other states have tornados, said Bethany Beach Mayor Lew Killmer. “We really depend on you for our survival.”

It’s not just houses that are at risk from coastal storms and flooding, but also the many jobs that stem from Delaware’s tourism economy.

Lobbyist and coastal expert Tony Pratt also reminded officials of the Army Corps’ responsibility for the nation’s waterways, including channel maintenance and flood control of the inland bays.

Those back bays are a major and sometimes overlooked source of coastal flooding, said South Bethany Mayor Tim Saxton.

“The last major storm that we had here … you guys did a great job [on the dunes]. They survived. It all came in the back bays and couldn’t get back out, and we flooded,” Saxton said. “The whole town flooded.”

Carper’s staff also asked that the Corps consider how to include recreation in the decision-making process related to which projects get top priority. As people have commented in the past, Delaware’s inland bays and canals may not be critical to major shipping, but the boaters, watercraft users and fishermen need safe access to water — or they’ll go somewhere else.

Delaware has a double challenge of rising seas and the Delmarva Peninsula’s sinking landmass.

“We want to make sure future generations have the opportunity to enjoy that life, liberty and the pursuit of happiness,” Carper said. “If we simply let the beach go flat … the next time a big storm does come, this will be gone.”

Compared to the cost of moving, rebuilding or losing the beach towns, “This is a bargain,” Carper said.

“The dune on which we’re standing was not here,” said Karen McGrath, a Carper staffer, showing a photograph of the Bethany boardwalk overlooking a very short beach with absolutely no dunes between the boardwalk and the ocean.

State to pay for part of Rehoboth/Dewey project

Perhaps as early as October, the Great Lakes Dredge & Dock Company of Oak Brook, Ill., will begin the $7.21 million project to widen the beach in those two towns and beef up the dunes there.

“The contract calls for dredging 409,000 cubic yards of sand from an offshore borrow site. The sand will be pumped through a series of pipes and placed on the beaches,” officials said.

The sand is then sculpted into a 13.2-foot-tall dune and 125-foot-wide berm template. The 2005 template was designed to reduce damage from coastal storms, and prior replenishment projects in 2009, 2011, 2013 and 2016 restored the beach and dunes to match their engineered template.

In this case, the majority of the work will be in widening the beach, although the dunes and pathways will see some repairs.

The contract does allow for some variations. If surveys determine that the beach needs an additional 100,000 cubic yards of sand, for instance, the project would cost $8.198 million.

The project is cost-shared, with the federal government paying 65 percent, and the State of Delaware paying 35 percent. It is a joint project of the USACE and the Delaware Department of Natural Resources & Environmental Control (DNREC).

Meanwhile, the area’s more southern beaches will be done in the next few years. Their latest replenishment was just completed in 2018, although the schedule pushed inconveniently into the summer tourist season last year. However, the 2018 Bethany/South Bethany and Fenwick Island Coastal Storm Damage Reduction projects cost about $19.3 million — which was all covered by federal funding, unlike the usual state/federal cost sharing.

Why don’t these projects all occur at once, rather than sending massive and rare dredges back and forth each year?

Part of the challenge is that the projects are authorized and funded individually. That’s partly because, environmentally, each section of shoreline is a separate “system” (Rehoboth Beach and Dewey Beach; Bethany Beach and South Bethany; Fenwick Island). Then the Corps’ Baltimore District also oversees Ocean City, Md., separately.

Congress would have to authorize the Corps to study whether the beaches can even benefit from simultaneous replenishment. For instance, because of the way that waves and tides work, it’s possible all the sand would migrate at once, leaving Lewes with a half-mile-wide beach and poor access to the water.

Congress has given the Corps’ Philadelphia and Baltimore districts permission to communicate and try to coordinate projects, only if the separate project authorizations and funding happen to occur at the same time.

The Army Corps at work

Park assumed command of the Philadelphia District’s 500-person workforce in July. Graduating from West Point in 2001, he holds degrees in aerospace engineering and engineering management, plus 18 years of experience.

The Army Corps dredges and maintains waterways for navigation; protects communities from flooding and coastal storms; regulates construction in the nation’s waters and wetlands; responds to disasters and remediating environmental hazards; and can provide engineering and project management services for other government agencies.

The Philadelphia District encompasses the 13,000-square-mile Delaware River Basin and the Atlantic Coast from New Jersey’s Manasquan Inlet to the Delaware-Maryland line.