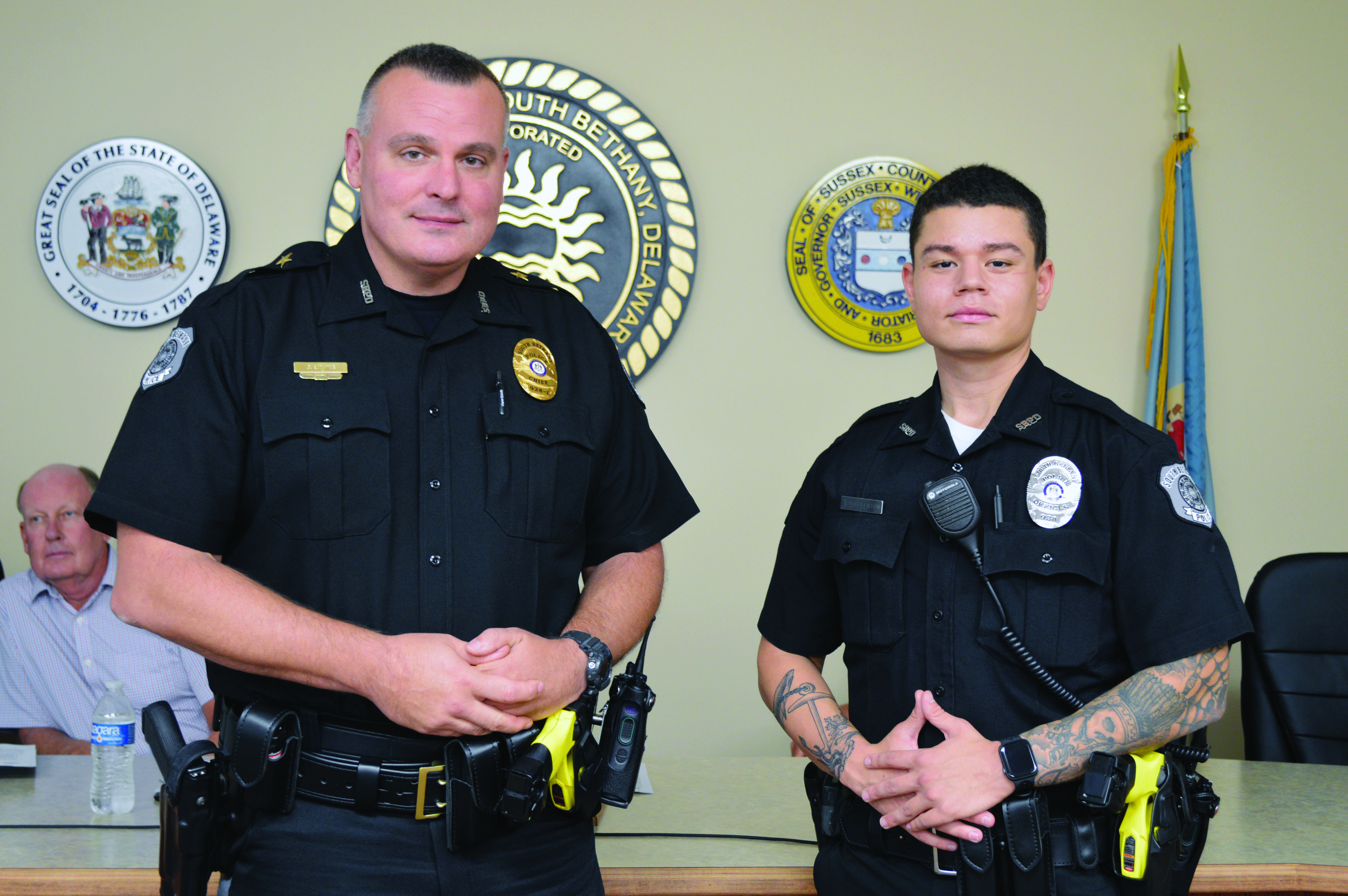 Graduation accomplished! As the South Bethany Police Department continues to rebuild, they celebrated Officer Terik Fullerton’s graduation from the Delaware police academy. He completed the six-month program in August, with high honors.

“We’re lucky to have him,” said SBPD Chief Jason Lovins. “He’s going through the field training program right now, where he rides with senior officers who show him the ropes, show him how things are done.”

The Ocean View Police Department has helped with his training, which is particularly helpful because their call volume is about triple that of the SBPD’s at this time of year, Lovins said.

After a few months, Fullerton will be fully certified to patrol on his own.

In August, the town council had also voted to send Anthony Quirez to the police academy, which began in September. After his training, South Bethany will be back to its full complement of five fulltime officers and one chief.

Quirez was already a seasonal enforcement staffer in South Bethany, so the Town saw his potential to be a regular officer. While he is in the police academy, South Bethany pays him a salary and provides his weapons and equipment.

Facing a police shortage, the town council earlier this year gave the SBPD permission to hire new recruits who didn’t already have Delaware certification. Until then, they had insisted on Delaware-certified cops.

“I’m happy to support the chief and let him build the team he wants,” said Council Member Carol Stevenson when voting for the new hire.

“When we take an officer from another department, that doesn’t help the state with the number of officers in the state,” Saxton said. “This will be our third [hire] who we didn’t take from another agency in the state.”

So rather than playing musical chairs with existing Delaware officers, South Bethany is investing in adding more people to the pool.

After waiting months for their managers to write a new set of Standard Operating Procedures (SOPs) and police manual, the town council has decided to hire a company to help.

It started when two outside consultants recommended that the SBPD rework and update its policy manual.

“The policies and SOPs are in shambles,” Lovins said. “And we have so many copies I don’t even know which one we should be using or not.”

“Lexipol is an outside company that provides draft policies that are generic that go across police departments, and we would need to modify them to fit South Bethany,” Saxton said.

They charge a subscription fee based on department size ($3,800 for South Bethany’s first year). First, they provide a Delaware model policy that SBPD can review and modify to fit the town. The SBPD then sends the draft back to Lexipol for a legal review, to ensure compliance with any other state or federal laws. It also provides guidance on best procedures and would notify Lovins, for instance, if the SOPs went contrary to what the Taser company recommends for safe use of that device.

“It’s difficult in modern-day policing to keep up with everything you’re supposed to do, or what you can’t do, and they help monitor that,” Lovins said.

The company provides an electronic manual for easy access, “all right there at their fingerprints.”

This will be South Bethany’s document. At any time, they can print out the paperwork and cancel the subscription. It is a full, new manual. It is not a supplement to other policies. However, Lovins noted that one Delaware chief had intended to cancel the subscription after one year, but she enjoyed it enough to continue for several more years. He estimated that about 11 Delaware departments use Lexipol, including Ocean View.

“The biggest selling-point to me was the education of the officers,” Lovins said.

Anytime the SBPD updates the manual, the program will notify officers, who must sign off that they read and understand the change. In the old days, paperwork would often come from a chief, but among their many duties, officers didn’t always acknowledge it.

There are also daily bulletins and monthly test scenarios, which is great for the SBPD’s many new officers, he said.

The hardest part is the beginning. For possibly the next six months, Lovins will review the model policy and write all the adjustments that would fit South Bethany. It will be labor-intensive and require additional staff help.

The town council will still be involved in police issues including finances or personnel, but they will rely on the chief’s expertise for issues such as pursuit or arrest procedures.

Traffic has been slowing down in the town — partly because the busy summer season is over, partly because officers have been handing out tickets and warnings. Police aren’t seeing people hit 60 mph in the 35-mph zone on Route 1.

Because so many drivers are just temporary vacationers, “That education is always an ongoing battle,” said Lovins. “But a lot of the daily commuters — I think they realize that South Bethany officers are sitting out there, and they’re handing out tickets. … The traffic is slowing down.”

“They’ve asked if they could join with us in our conversations with DelDOT,” said Town Manager Maureen Hartman. “It took some bad accidents to bring attention to it, which is how it usually goes, unfortunately. … I think it’s moving in the right direction.”

For pedestrian safety, the police reiterated that pedestrians only have right-of-way if they are already actively using a crosswalk when a vehicle approaches. Otherwise, they must yield to traffic. That has caused confusion, because neighboring states have more stringent rules that favor pedestrians’ rights-of-way, which sometimes leads to only half of the cars stopping for a pedestrian in the median.

‘No one’s happy with Mediacom’

South Bethany’s seven-year cable franchise agreement with Mediacom will expire in July of 2020, and concerns are already on the rise.

Four town managers have been meeting to discuss the future of their business with the company “because no one’s happy with Mediacom,” Hartman said.

Bethany Beach, Millville, Ocean View and South Bethany are part of a consortium that negotiated franchise prices and terms with Mediacom, although each has a separate contract. Mediacom pays a franchise fee to each town in exchange for being allowed to bring their cable lines through the town. The franchise fee paid to the Town of South Bethany is $35,000.

When franchise agreements have expired in the past, local residents have often asked their town councils to reject Mediacom in favor of another provider, but other providers have been reluctant to enter the local market and install their own infrastructure, absent gaining all or nearly all of the potential customers.

Telecom companies are among the most negatively-regarded companies in the nation, with Mediacom holding a high position in some past customer-service polls — as among the worst companies consumers deal with.

But Hartman warned that the grass isn’t always greener on the other side. Switching companies won’t necessarily mean better service. But she was otherwise vague about her recent discussions with Mediacom and Comcast, since there is so much discussion happening right now.

In other South Bethany news:

• Town Hall is doing some housework by cleaning out the archives room. Staff found some documents dating back to the 1960s. Some were interesting, such as an old photo. But plenty can be tossed out.

“It’s not even like payroll things or HR things. It’s like an old letter from a resident, stuff like that,” said Hartman. “We probably haven’t done it since we became incorporated.”

• The Planning Commission is expected to discuss bicycle parking at the Oct. 24 council workshop.

“Part of our goal in all this is to have more bike racks. It might not be where every individual wants them. … Nothing’s off the table at this point,” Saxton said.

• Beach bonfires (Town-sponsored, not privately-hosted) are coming to South Bethany. In August, the town council adopted Ordinance 195-19, which authorizes the town manager to allow public, Town-sponsored bonfires on the beach. Just like the movie showings it offers on the beach, the Town will likely hire a professional vendor to host the actual bonfire.

The Town also clarified that there will be a non-refundable $50 for private parties who host events on the beach, which must all end by 11 p.m. That administrative fee will no longer be refunded, because town staff are still often doing clean-up or office work involving the event/permit.

• Several events were highlighted for the coming year. South Bethany is featuring six homes for the third annual Historic Cottage Tour on Oct. 12, which benefits the Coastal Towns Historic Village.

The Town will host a fall potluck and costume party on Oct. 26.

The 2020 summertime photography exhibit will expand to include original art by South Bethany visitors and property owners.

• Asked about the prohibition on alcohol at Town Hall, the council confirmed that they enacted that rule partly because of insurance.

“It’s similar to a bar situation. If they overserve someone, and he gets in an accident,” the bartender and the restaurant could be liable, said Frank Weisgerber.

The South Bethany Town Council’s Sept. 26 workshop was rescheduled for Oct. 10 at 2 p.m. Their next regular council meeting is Oct. 11 at 6 p.m.