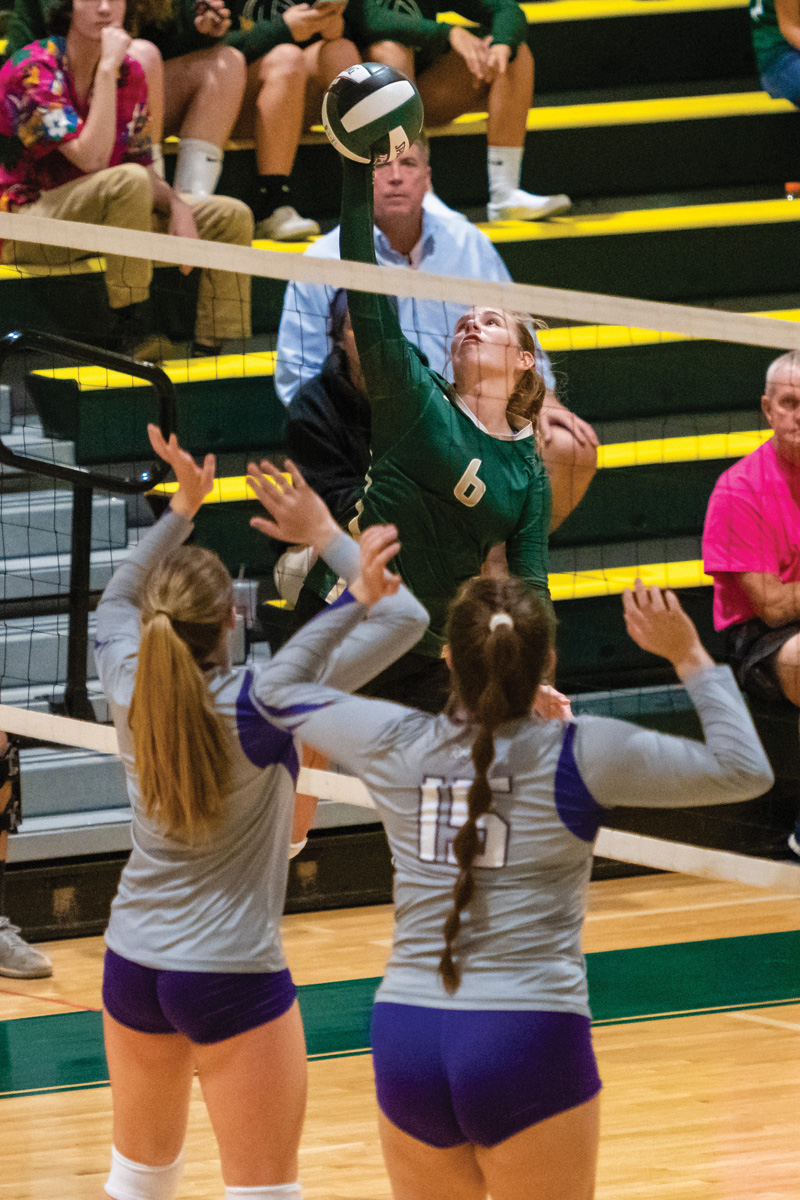 It has been the biggest monkey anyone could possibly imagine hanging on the backs of the Indian River High School girls’ volleyball team for the past 12 matches.

On Tuesday, Oct. 15, that monkey finally found a new home.

With a raucous home crowd of parents, friends and their classmates cheering them on, the Indians overcame an early 1-0 deficit to recover for a 3-1 win over their long-time nemesis, Smyrna. The Indians dropped the first game 25-20, but won their three by scores of 25-21, 25-16 and 25-21.

It was another monster performance from junior outside hitter Raychel Ehlers, who once again overpowered the opponent with her strong finishing spiking ability. Ehlers recorded 25 kills to go along with 10 digs. For the season, Ehlers has 229 kills and 86 digs.

“At the end, I kind of told Cam to ‘Feed the Beast,’” Barnes said of Ehlers’ sister Camryn. “At that point, Raychel was in a zone. Once we could get her to the front row again — not to say the other players didn’t do well — but you could see the level that separates the players.

“When you are playing with adrenaline, and you really want to win, there’s not really much that can stop you from winning, when you’re a player playing at the level that Raychel is playing — but somebody’s gotta pass the ball, and somebody’s gotta set. I thought our setters set really well. Every player — whether is was Lia, Skylar, Natalie — when they got the chance to make a play, they made the play.”

Freshman Camryn Ehlers was again a steady hand on the sets, along with Marianni Chavez. Camryn Ehlers registered 27 assists and eight digs of her own, while Chavez added 10 assists, one ace, and a dig. Camryn Ehlers has picked up 245 assists overall for the season, with 65 digs. Chavez is second on the team, with 95 assists.

For seniors Chavez, Jessica Amezcua, Natalie Burnshaw, Siera Johnson, Cici Macedo and Dreonna Phillips, this win was a long time coming, and one they certainly were glad to get before graduating.

“We made history,” an elated Amezcua said after the match. “So much adrenaline and happiness that I am so excited. It’s so emotional. I can’t believe we did it. Hard work pays off.”

Amezcua contributed 14 digs, three assists and a pair of aces to the winning effort. Johnson added 11 kills and a dig as well.

“I felt we were the better team, and we had to play the best to beat them,” Barnes concluded. “The only team in our conference that I know every player that has played under me hasn’t beaten them,” he said of Smyrna. “So, I am very happy for the whole team to get a victory.”

The loss dropped Smyrna’s record to 8-4 overall, while the Indians improved to 10-2.

IR had three more matches left in their regular season, as of Coastal Point press time on Wednesday, with the next two coming on the road against Early College High School on Oct. 17 and Woodbridge on Oct. 22. They will wrap things up on Thursday, Oct. 24, with neighboring rival Sussex Central coming in — Senior Night for the Indians.