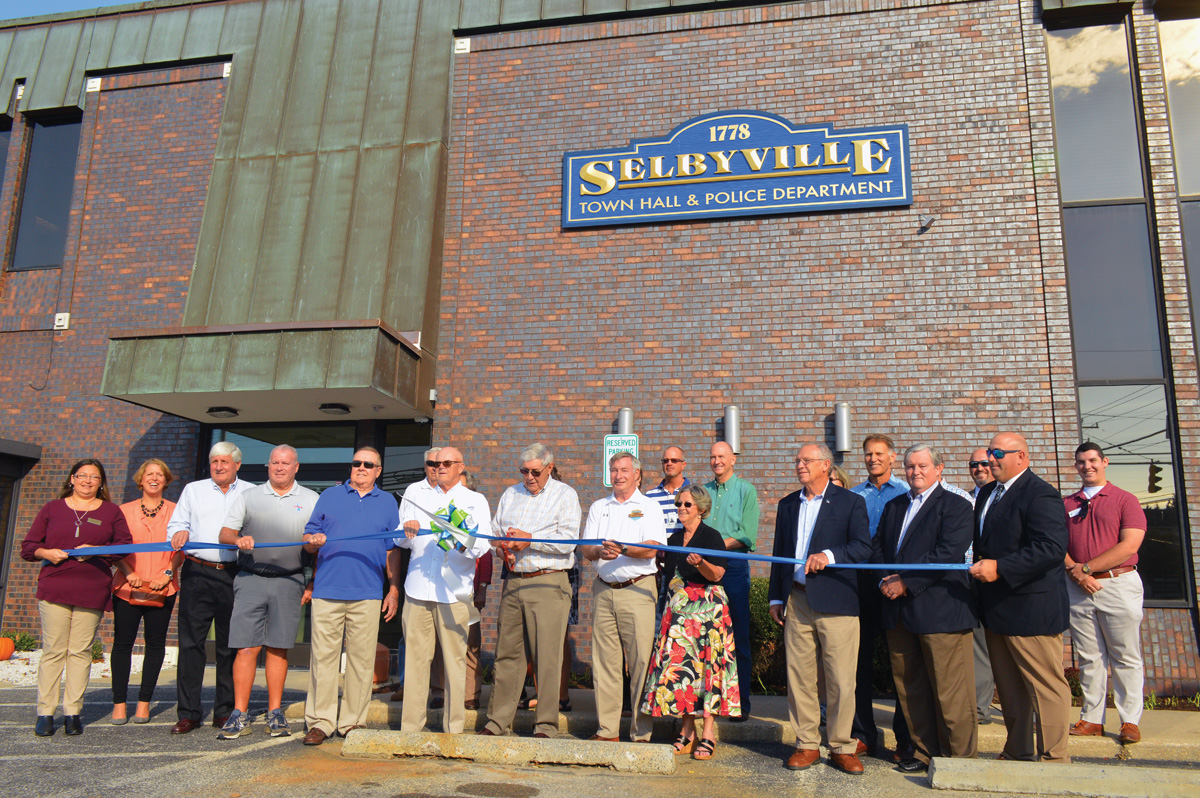 Town officials and staff were grinning at the new, freshly painted and renovated two-story building at 1 W. Church Street. It was all theirs.

“We are delighted with our new offices with room to grow,” said Town Administrator Stacey Long. “This place has truly exceeded my expectations, and I can’t wait to spend the rest of my days here until retirement.”

“It’s a relief. There’s room to function. They’re not on top of each other,” Mayor Clifton Murray said. “I do welcome you to this new, beautiful facility.”

“We would like to thank everyone, too. We are very happy here,” said Debbie McCabe, staff secretary/treasurer.

Other council members touted their departments and Selbyville’s growth over the years. They thanked the designers, builders, staff, and visiting state and county elected officials. Even former town administrator Bob Dickerson came to visit his former office from when he was bank president there.

In fact, the site has always served the public as a bank. The Baltimore Trust Company was founded there in 1903, and a series of mergers led to the space being occupied by PNC Bank, which eventually left in 2017 and sold the Town of Selbyville the property in 2018.

Construction had some of the usual delays, but it went smoothly overall, said Council Member Clarence “Bud” Tingle Jr. “I think it’s great. I think it’s the ideal spot at the ideal time.”

It was a unique project, turning the bank into a police building, because they had to consider reinforced walls, holding cells and soundproof walls.

“Other than that, it was just renovating a 50-year old building from the 1970s,” said Bunting.

The police officers are especially happy to escape the old town hall. Now, the old bank vault doubles nicely as an armory/evidence room. There are separate men’s and women’s locker rooms with showers, and enough computer space for fulltime officers, plus visiting state police.

The hallways are color-coded, since the regular staff and the police officers share both floors of one building. The western halls are painted green to indicate Town Hall, and the eastern rooms are blue for the police department.

At Monday’s town council meeting, officials said they still don’t have particular plans for the old building at 68 W. Church Street. For now, they’re letting community groups continue to use the meeting room for free. (“We’re being a good neighbor,” said Council Member Rick Duncan Sr.) Some town staff also use it as a makeshift office when they’re on the road. The Town could also erect a pole building for staff to use.

Anything might be better than the old one-story building, which was falling apart. Over the years, it had been a ceramics shop and bag warehouse, with possibly other uses. Before that, town hall was housed in the two-room railroad station (now a railroad museum).

“It was held together with duct tape, caulk and a lot of love,” Collins joked of his recent police station. “And the love was gone.”