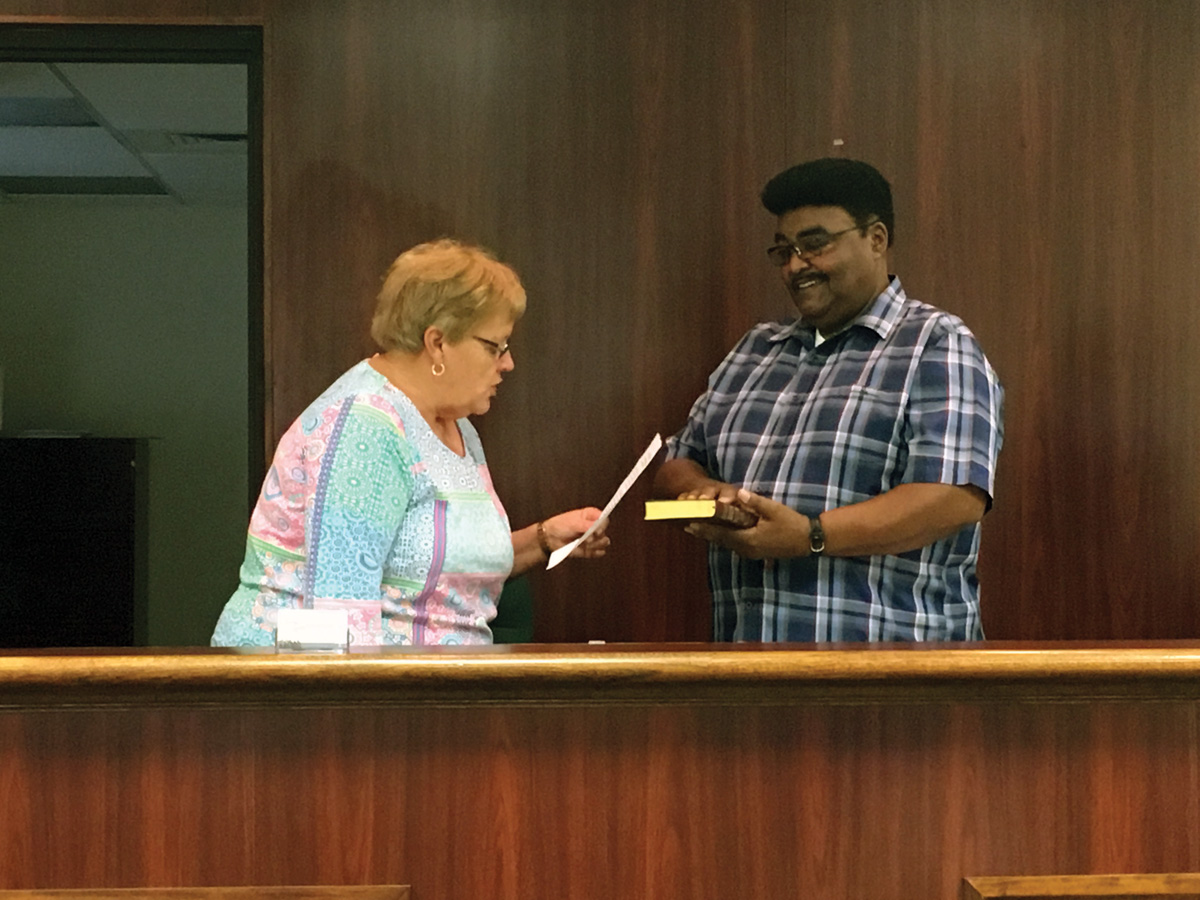 Sample brings lifelong love of his town to Frankford council

The newest face on the Frankford Town Council is anything but new to anyone who’s been around town for more than five minutes.

Jimmy Sample took the oath of office in September, joining the council after the resignation of Velicia Melson.

Many people around Frankford know Sample as their children’s bus driver, since he has “carried” children from Frankford and Selbyville to school for 47 years now, as he said in a recent interview.

The way Sample uses the word “carried” instead of “driven,” and the way he pronounces “town” — with a long “o,” so that it sounds more like “toan” — marks him as being among locals who grew up there. He lived beside Route 113 before there was a Route 113, he said.

Sample and his wife, Edith, still live in the house he built next to his parents’ home. His parents moved the family “to town” from near Frankford Elementary School in 1965. After serving two years in the U.S. Army during the Vietnam War (he was drafted and worked in communications, and points out that he did not have to go to Vietnam), he came back to Frankford, where he and his wife raised three children.

He said that, although he never had to travel farther than Puerto Rico during his Army service, the trip there and back was “a real experience” that shaped the rest of his life.

“I think it’s the best thing that could happen to a young man,” Sample said. “It gives you a sense of responsibility and makes you grow up.”

He said he might have pursued a career in the Army but decided to return home when his mother became ill. She died of cancer at the age of 42.

“That’s why I believe you got to live each day. … When you go to bed at night, you got to be, ‘Did I get everything accomplished today that I wanted to?’” he said.

For Sample, making a difference for hundreds of children who rode his bus over the years, and training numerous bus drivers as a state-certified trainer, have made for a fulfilling life.

“There’s nothing like seeing those little smiling faces every day, and you’d be surprised at the rocks and stones I have,” gifts from his small passengers over the years. “I’d get dandelions every day. You can have a bad day, and those kids can just kinda warm your heart,” he said.

“They said, ‘Well, Dad, there’s nothing for us to come back to,’” Sample noted. He said he doesn’t disagree. “We’ve got nothing to offer them; they’ve got to leave and go somewhere else to find a job, and it shouldn’t be that way.”

Sample said Frankford needs to expand its borders and its tax base to be able to provide good jobs and the kind of place where people want to raise families. Annexation, he said is a key to Frankford’s future. That, and an ability to attract larger businesses that have to come into the town if Frankford is going to be able to grow into a town that is attractive to outsiders, as well as a place where current residents want to stay.

Twenty years ago, he said, he was a supporter of a proposal to bring a casino to Frankford. He said he was approached at the time by Mayor Kay Olmstead, since it would have been located across Route 113 from his home.

As of now, though, Sample said, there isn’t even a place in town to get a loaf of bread or milk.

“You got to go to another town,” for the most basic necessities, he said. “We’re giving [nearby towns] the revenue that we should keep here in our town.”

For now, Sample said, he is working with fellow council member Skip Ash and Frankford’s maintenance department to clean up the town’s streets, ditches and derelict properties.

“We’re trying to clean up town and make it look like a decent town,” he said.

“You got to make town inviting so someone will want to come. Right now, it’s just not inviting,” Sample added.

A self-described “flower freak,” Sample said he would “love to see gorgeous pots set along the street as you ride through, with blossoming plants. I mean, that’s just me,” he said.

The town hall has already been the beneficiary of Sample’s love of plants — two large ones in the foyer were gifts from him after they grew too large for him to transport to and from his church as altar decorations, he said.

For now, Sample said, he will continue to work toward making Frankford more inviting in any way he can.

“It may not happen within the next two or three years, but, hopefully, myself and the others can lay the foundation so we can get under way so we can have something for the next generation here,” he said.

Sample said he hopes that more residents will take an interest in improving Frankford as a whole. He said he was pleased with the turnout at a recent meeting to discuss making the intersection of Daisey Avenue and Route 113 safer, and hopes to see continued community involvement in similar issues.

He also said he hopes the town can come together to blaze a path forward for the town he has called home for all of his 71 years.

“You got to have a vision to accomplish anything,” Sample said.