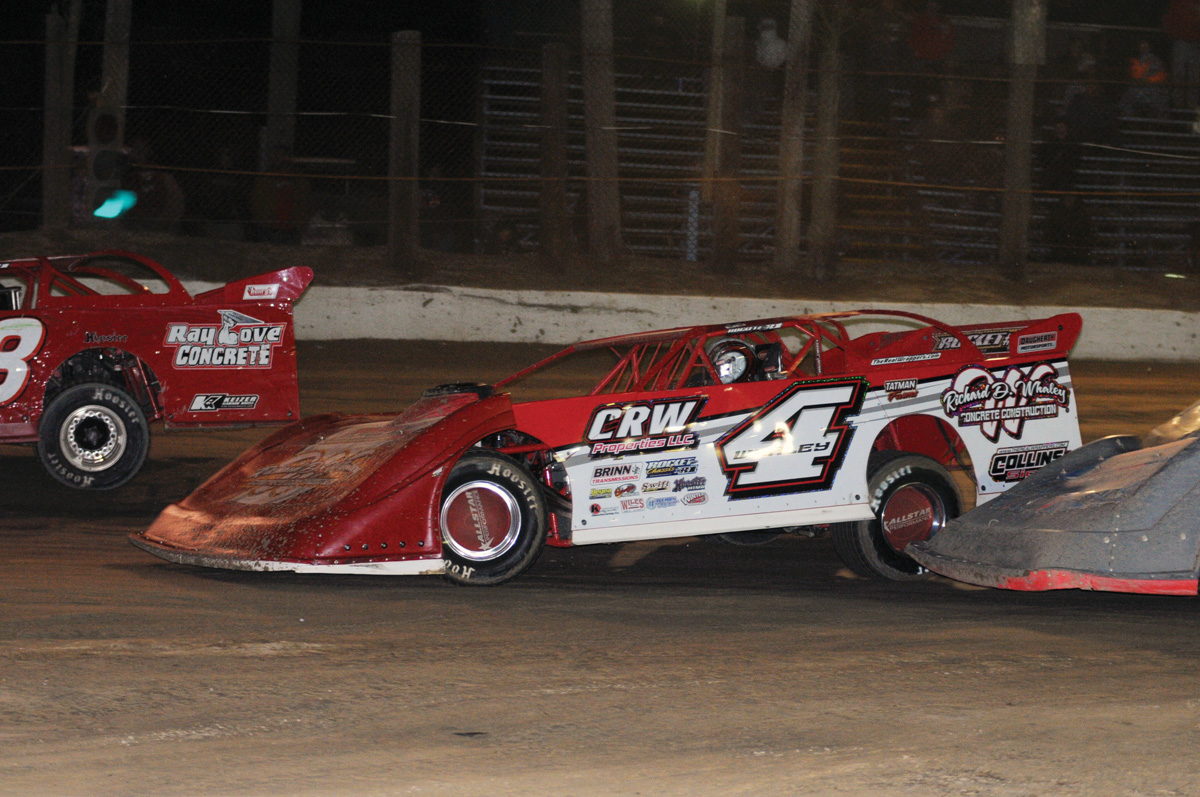 A chance to earn money and bragging rights had Georgetown Speedway’s paddock packed with 231 racecars entered in the annual Mid-Atlantic Championship Weekend. Despite cold weather, fans, eager to see their favorite drivers, filled the bleachers last Friday and Saturday nights.

Six of 40 laps remained when Watson grabbed the lead on a restart. From there, Watson quickly built a small cushion that he took across the stripe.

Watson pocketed $5,000 for the win, plus $2,000 from the Stockley Materials’ Gambler’s fund, in which confident racers can bet $200 on themselves before the race and cash in if they win.

“It’s a top dominant track, and on the restarts I was getting hung up on the bottom quite a bit,” Watson described. “About midway, I got to the top and passed a couple of cars, and then I got the lead on the restart.”

Robinson’s situation was different from any other racer that night. He had his fiancée chasing him across the stripe in the 40-lap $5,000-to-win Super Late Model division.

When the initial green flag flew, Robinson was in the second row. Rick Eckert and Millsboro native Donald Lingo Jr. were in front of him. Lingo shot into the early lead, followed closely by Eckert and Robinson.

Robinson stayed glued to Eckert’s back bumper for 11 laps. Caution waved as Eckert exited the track and disappeared into the pits.

That put Robinson in the catbird seat — a position he would use to his advantage on the ensuing caution. With Lingo beside him on the restart, Robinson got the jump, this time going under Lingo. They traded a little paint. Robinson stayed on the throttle, and Lingo surrendered to the pits.

Second place didn’t stay vacant long. Mark Pettyjohn put his machine there as he kept Robinson busy defending the lead. The fighting got so fierce at one point they banged doors, and Robinson dropped over the Turn 2 banks, reemerging on the straight-away still leading. Lingo dove into the pits.

Now trailing him in second was another Millsboro native and his wife-to-be, Amanda Whaley. Whaley would close the gap down to 2.554 seconds difference at the stripe.

“It’s cool to finally win one here. I don’t know what to say,” Robinson admitted. “This is big. I just want to savor it and appreciate everybody who’s helped us up to this point.”

Laurel racer Brad Trice battled Hitchens for the first 10 laps. Then, after toying with Trice, Hitchens shot by him and never looked back. Hitchens earned $1,500 for the win.

Trice finished second. Behind him came Tim Buckwalter, who fought his way from 21st to third. Tom Sherby followed in fourth, and Dylan Swinehart capped the top five.

That concludes the 2019 racing season at Georgetown Speedway. Track promoter BD Motorsports Media LLC says they are working on their 2020 schedule and will announce those dates soon.

By Bruce C. Walls
Special to the Coastal Point