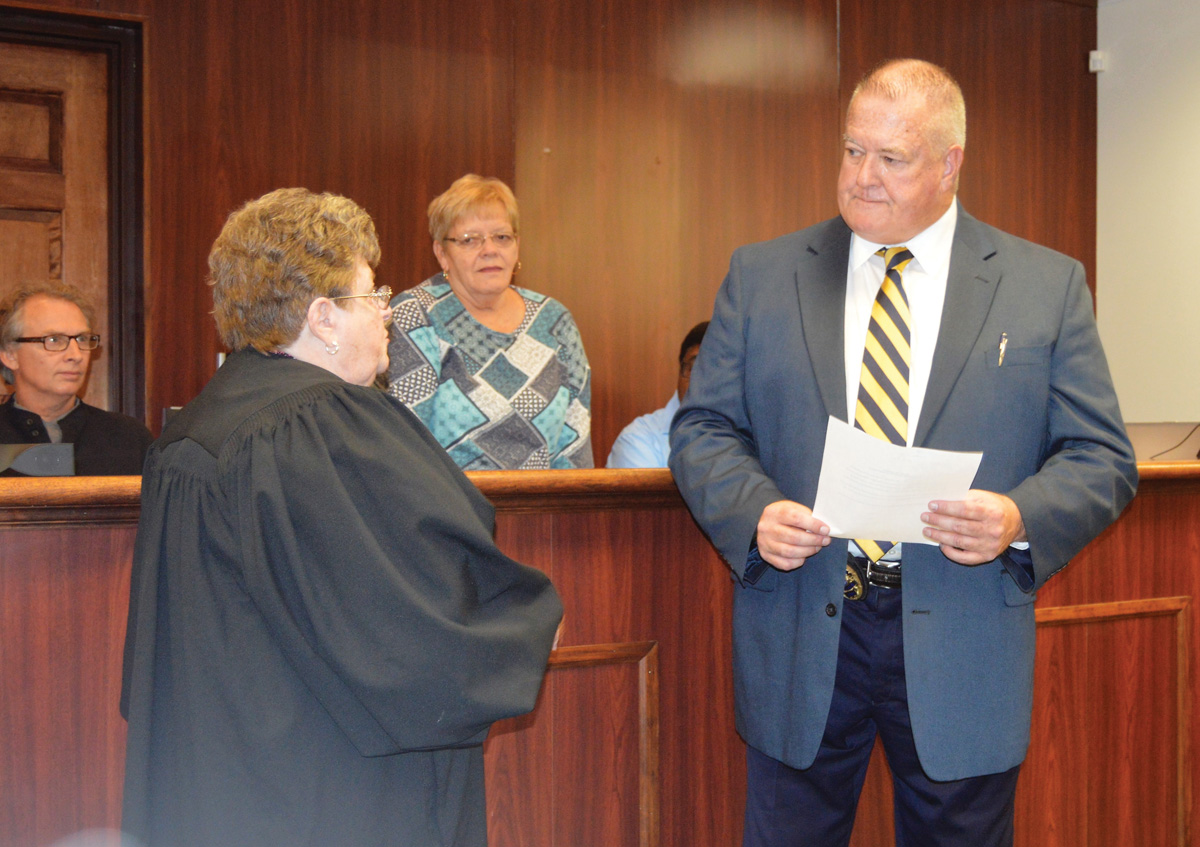 Corrigan settles in to new role as Frankford police chief

Laurence “Larry” Corrigan is the kind of person whose presence fills a room. He’s an imposing guy, standing well over 6 feet tall.

And he might be (literally and figuratively) the biggest cheerleader Frankford has had in a long time.

He has also worked for the Salisbury University Police Department and the Wicomico County (Md.) State’s Attorney’s Office as an investigator, and for the Delaware State Police before that.

Selbyville Police Chief W. “Scott” Collins had this to say about Corrigan: “Larry is a dedicated, very experienced officer who is excellent when dealing with the public. He is hard-working, to a fault. I’m not sure I know a more experienced officer.”

Indeed, Corrigan told the Frankford Town Council last month that he expects to work long hours — particularly at first. Although he said he hopes the Town can hire at least one more officer, he said he feels confident that his decades of experience in such diverse areas of law enforcement will help him to make a difference in Frankford, which has been without its own police presence for two years, since the departure of its last police chief, Mark Hudson.

“We’re up and running now,” Corrigan said. He emphasized that while he is the “lone police officer, I don’t feel alone,” thanks to members of the community and other police departments offering their support.

“I have a lot of people supporting me,” he said.

Fenwick Island Police Chief William Boyden said that while “Larry will leave a very large void in Fenwick Island,” Boyden had promised to support him in his new role in Frankford.

“The Town of Frankford is very fortunate to hire a person with his credentials and qualities,” Boyden said. “Larry is rebuilding a agency from the ground up, and I and many of my fellow chiefs of police will do anything we can to help Chief Corrigan rebuild the Frankford Police Department.”

That support was evident when Corrigan took his oath of office on Nov. 22, in a town hall that was filled to overflowing with members of other police departments, friends and family.

“I first met Larry in 2003 and was impressed from our first meeting,” Boyden recalled. “I have been in law enforcement for 40 years, and Larry is what I consider a poster for law enforcement.”

“Larry is imposing when you see him, but a gentleman and very fair,” Boyden said, adding that Corrigan “has a gift of being able to talk to anyone he comes in contact with, and one walks away impressed with him. I know the residents of the town of Frankford will embrace Chief Corrigan as we all have over the years. Larry is the best of the best,” Boyden said.

Corrigan said he is also thankful for the encouragement he has received from members of the community, including Indian River School District Superintendent Mark Steele, who approached him at a local restaurant not long after Corrigan’s appointment had been announced, and offered his support.

“I have high aspirations for the department,” Corrigan said, though he said he is realistic about the challenges he will face. “I know there’s a lot of things I don’t know. It’s a fairly large undertaking for one person. I acknowledge that.”

Corrigan said he feels ready for whatever comes his way.

“My whole life has been a build-up for this job,” he said.

From his first day on the job, Corrigan has focused on listening to the concerns of residents and getting to know the community. He said he wants to connect with the entire community, from the youngest children to the town’s senior citizens, and has plenty of ideas he wants to implement to strengthen his relationship with residents and to bring resources to the town that will provide information and support.

For example, Corrigan said, he has received many comments from people who want to see the DARE drug education program brought back to local schools, and he plans to see what he can do to make that happen. He also wants to bring educational programs to the town, to help senior citizens be less vulnerable to scams that target the elderly.

Children are definitely going to be a large part of Corrigan’s outreach, he said. He has already put together a Community Holiday Lunch to which all children are invited, as well as their parents or guardians. The lunch will be held on Saturday, Dec. 28, at the Frankford Town Hall, 9 Main Street, starting at noon.

In addition to that, Corrigan said, he wants to show Frankford’s youth that they have a path to success.

“I want to bring in successful professionals who look like them” he said. “We have one shot at these kids’ childhoods.”

He said he also wants to help parents keep their children safe. Another program he hopes to implement is classes to educate parents about child predators. He said he has already been contacted by a youth mental health counselor who has offered to be a resource.

Frankford doesn’t have a town manager, and Corrigan said he fully expects part of his job to be representing the Town in that type of role.

“I’m a big fan of community relations,” he said.

“I’m also a fan of the 3-by-5 card,” to help him keep track of all of his ideas for the Town, he said with a chuckle.

Corrigan lives in Selbyville with his 18-year-old son, “a hop, skip and a jump” from town limits, he said. A native of Newark, he has lived in Sussex County since joining the state police in the late 1980s. His parents have since retired to Dagsboro; both sat in the front row during his swearing-in ceremony.

As he moves into the new year in a new job, Corrigan said he has big hopes.

“I want us to be a model town in this area. I want this police department to be a shining star.”

Corrigan said he feels the responsibility of bringing new ideas and new hope to a town that has struggled in recent years.

“This is important to this community,” he said. “There’s something magical and special going on here.”