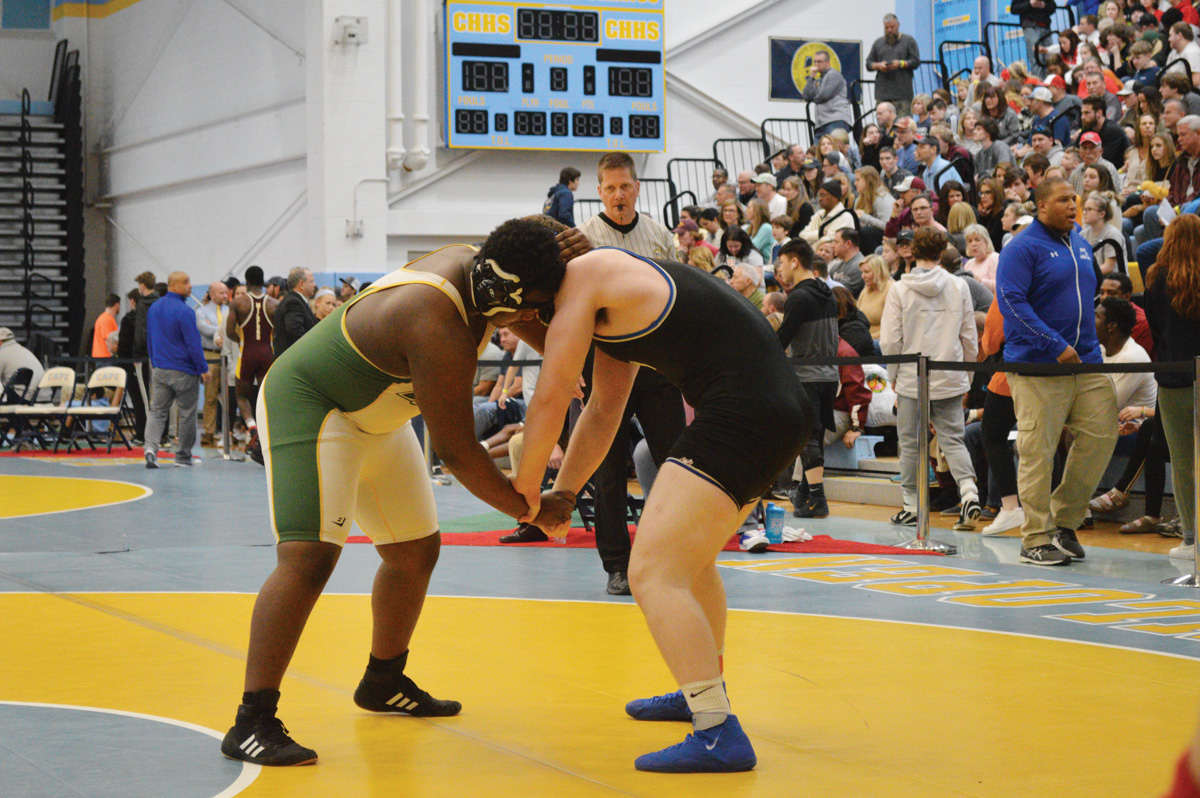 IR wrestlers struggle at the Beast

The annual showcase of high school wrestling talent from across the country descended upon the University of Delaware’s Fieldhouse last weekend, Dec. 21-22, and the action was certainly up to standard for those watching in attendance.

For the 20th straight year, New Jersey’s Blair Academy won the team championship, with 239.5 points overall, far and away ahead of the second-place team Ohio’s Brecksville, with 175 points, and the third-place team, Malvern Prep of Pennsylvania, with 164.5 points. There were 134 teams from 19 different states, as well as one lone entrant from Ramstein High School in Germany.

It was a bit of a struggle though for the five local entrants from the Indian River High School wrestling program, as they went a combined 2-10 overall.

Ta’Jon Knight won his first match in the 138-pound bracket of the Beast by pin over  Ethan Slaughter of Christianburg, in Virginia, in 1:22 of the first period. He then dropped into the consolation round falling to Lucas Chittum of Blair Academy in New Jersey, at 1:39 of the first period. Chittum went on to win the bracket. Knight was then eliminated in the consolation round by Patrick Wisniewski of Caesar Rodney via pin fall at 4:59.

Ramond Turner received a first-round bye in the 285-pound bracket, but then dropped his second-round match to Ben Grafton of North Allegheny, in Pennsylvania, by a 3-2 decision based on tiebreaker No .1. He would then bow out of the tournament with another loss by decision via tiebreaker No. 1, this time to Jake Thompson of Kellam in Virginia.

Ian Shaubach dropped his only two matches in the 120-pound bracket, falling to Mason Barrett of Liberty Bealton by technical fall (17-0), then was eliminated by Sam Congleton of Woodbridge in Viginia by major decision (15-1).

Wesley Brockson dropped both of his matches in the 145-pound bracket. He lost by pin to Jagger Condomitti of Northampton in Pennsylvania in 58 seconds, then by major decision to David Smith of Maryland’s St. Christopher, 11-0.

Cole Windish was the fifth participant for the Indians, competing in the 160-pound bracket. He dropped his first-round match to Kieran Calvetti of Delbarton in New Jersey by pin in 56 seconds. He then lost in the consolation round also by pin in 2:10 against Christian Robbins of Perry Massillon in Ohio.

More on the Beast

The best finish by a Delaware team was Henlopen Athletic Conference member Smyrna, who came in 13th overall in the team standings, with 89.5 points.

Smyrna’s Gabe Giampetro came in fourth at 106, which was the best finish by a HAC individual athlete.

Before the Beast tourney, the Indians took the more than one-hour drive north to the state capital on Wednesday, Dec. 18, and came away with a convincing 54-21 win over Dover. It was their second straight dual-,meet win to start the season.

Of the matches that were contested, Ian Shaubach and Cole Windish posted wins by pin.