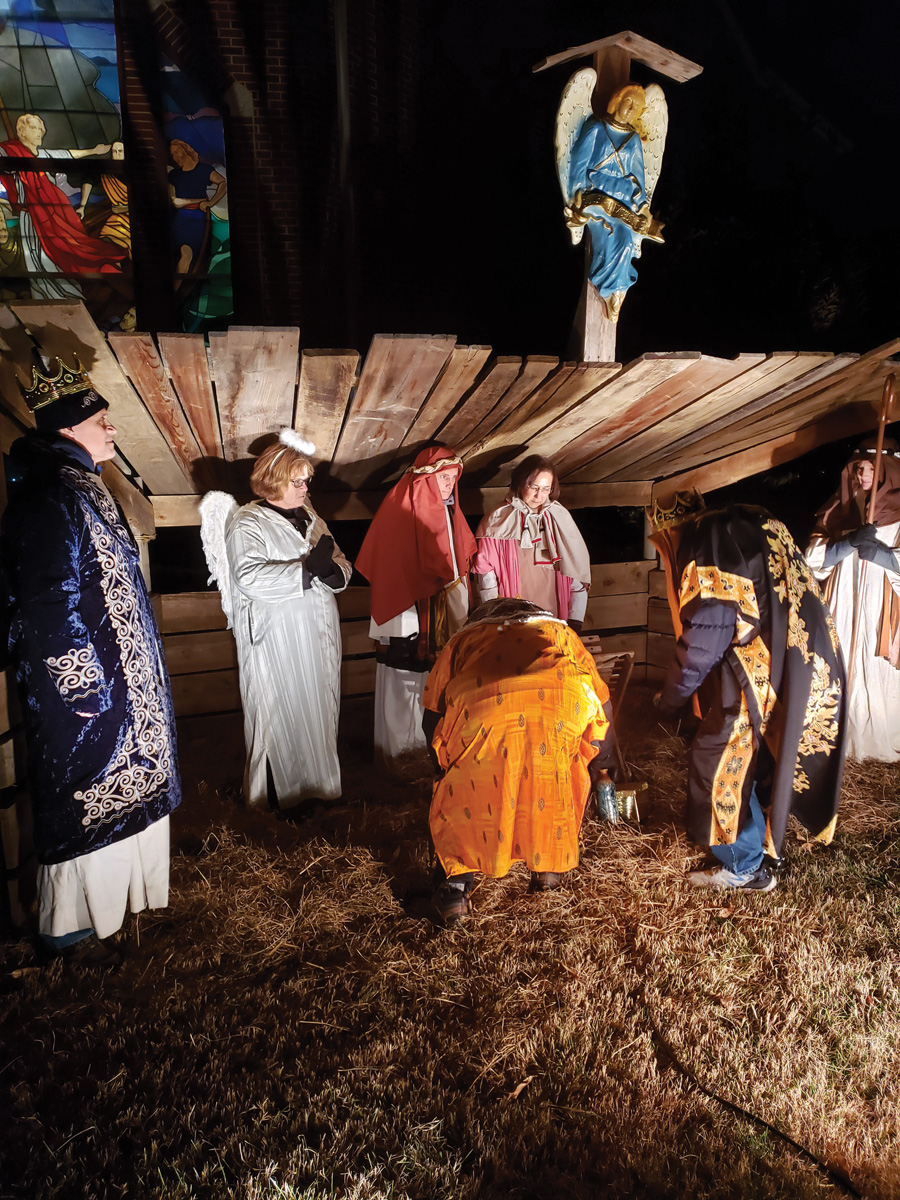 In the stable, standing on hay with Joseph at her side, Mary gazed at the baby in her arms and pulled the blanket a little tighter around him against the cold.

Joseph smiled gently at the two of them, and Mary returned the smile as those attending Mariner’s Bethel United Methodist Church watched the actors, in costume of the period, reenact the Christmas story, then joined to sing “O Little Town Of Bethlehem” to the strum of guitars.

As the faithful gathered outdoors to watch the Live Nativity, and those driving by turned their heads to see, the age-old story of Jesus — the baby whose mother lay him in a manger to symbolize his humility, and who is worshipped as the son of God among Christians everywhere — came to life.

Some stood around a fire in front of the church on Central Avenue in Ocean View, or sipped hot chocolate and tasted cookies, while other sat on bales of hay in front of the stable.

“This is the story of the birth of Jesus,” the narrator said, reading the Christmas story from the Biblical book of Luke, explaining how the Angel Gabriel was sent by God to visit Mary, a virgin pledged to be married to a man named Joseph, a descendant of David.

“You are highly favored. The Lord is with you,” Gabriel told her, the narrator said, as the church member playing the angel, complete with wings and a white halo, stood in front of Mary and Joseph, her hand outstretched, as though delivering news.

The crowd joined to sing “Angels We Have Heard on High” and “Silent Night” as Mary looked down at the baby, portrayed by a realistic doll, before shepherds arrived, followed by the three wise men who presented gifts of gold, frankincense and myrrh.

More Bible verses were read as the first of four consecutive 30-minute reenactments ended on Friday, Dec. 20, from 6 to 8 p.m.

“I thought it was very beautiful,” said Diane Fratalone of Ocean View. “This is the first time I came to see the living Nativity. This is what you do. It seemed like the right thing to do,” she said.

“It was lovely,” said John Michael Sophos of Lewes, who went to see the Nativity after being invited by his friend.

“I’m Episcopalian, but it’s all Christmas. My friend Pam called and said, ‘Let’s go,’ so I came. It was very nice,” he said.

The Rev. Dave Humphrey, senior pastor of Mariner’s Bethel, said that each year care is taken to present the program “in a worshipful atmosphere.”

“We get a lot of people who come to the live Nativity who aren’t regular church members. They find out about it by word-of-mouth. A number of our folks from our congregation come, but we have had, over the years, people who came to Mariner’s Live Nativity and it is their first event here.

“Just the fact that it’s outside makes it more real. It kind of evokes this idea that Jesus came in a real place that was not a big cathedral — not at all. In fact, it was outside in humble settings. That attracts people,” he said.

The Live Nativity was started by Christina Wilson, director of youth and family ministries at the church.

“We have enjoyed this tradition for the last 10 years or so. I’ve been here eight years, and this has been ongoing every Christmas. The church had been doing it several years prior to when I came,” Humphrey said.

“Hearts are warmed, and everyone has a good time.”