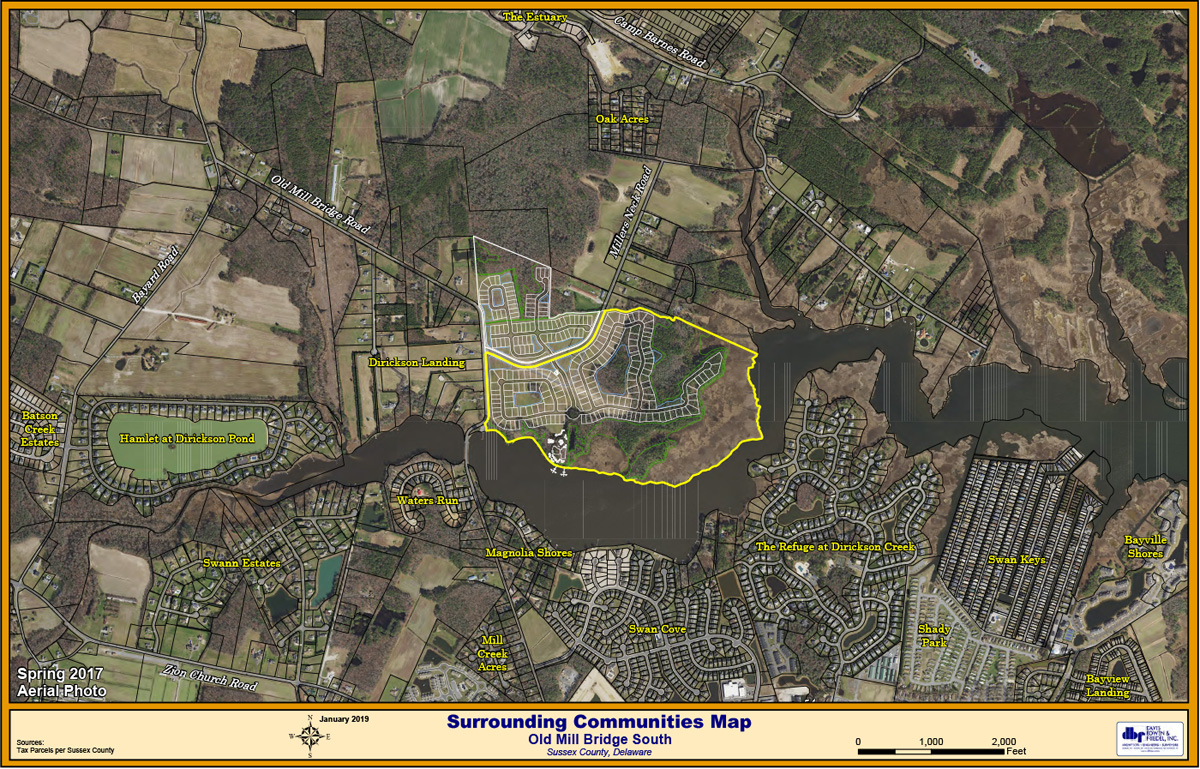 When a large group of residents speaks out about the proposed Old Mill Landing developments, they won’t be trying stop development. They say they know that’s not likely. But they planned to encourage responsible development at the Sussex County Planning & Zoning Commission meeting on Thursday, Jan. 9, at 6 p.m.

“We realize the reality of the area in which we live,” said Jeanette Akhter, who lives across the creek. “But part of the reality is we live in the environmentally sensitive district. … The protection of the environment is really put low on the list of priorities when the developments get planned out.”

The “Dirickson Creek Friends” group has organized in response to developments that have been proposed several times on this site. They are working to mitigate potential damage to the environment and historical sites from a proposed housing development. They want amendments that would guarantee these protections, if the County approves the subdivision.

Dirickson Creek wraps around the mostly natural parcel, with one mile of shoreline, with the Assawoman Wildlife Area less than one mile away. As proposed, two-thirds of the 184 acres would be open space or wetlands, with some additional buffers beyond what is required by law.

“We’re really encouraging methods in the development that would protect the trees and the wetlands and not destroy the function of the hydric soils,” Akhter said.

State agencies also offered some warnings in the 2018 Preliminary Land Use Service (PLUS) report.

Drainage was a major concern for Delaware Department of Natural Resources & Environmental Control (DNREC), which “strongly discourages building on hydric soils because they are functionally important source of water storage” during high tides and storm events. “Since hydric soils predominate over much of subject parcel, we believe (unless a site-specific soil survey determines otherwise), that this parcel is unsuitable for development.”

Although the housing layout appears to avoid much of the woods and water’s edge, about 30 acres of forest could still be removed.

In fact, various parties are trying to determine from the SHPO to what extent Native Americans were active on this site.

“The more people who attend that hearing, who can stand up and say, ‘We support these amendments,’ the more it makes an impression on Planning & Zoning and makes a difference,” Akhter said.

She said she hopes to bring public support from the Sussex Alliance for Responsible Growth (SARG), a nearby alliance of housing developments and neighborhood associations who partner on regional issues, such as development, safety, mail delivery and more.

Akhter said she appreciated the developer’s willingness to meet with the concerned citizens and try to alleviate some concerns.

“Preston Schell has one of the better track records as far as trying to be sensitive toward sensitive issues and historic issues. So, we’re still hoping to be able to work along that line,” Akhter said in November.

For traffic safety, the developers want to realign Millers Neck Road, softening the sharp right angle into a gentler curve. However, there is some concern about the overall increase in traffic from the additional residences.

Amenities would include docks on Dirickson Creek, a club house, pool, pickleball courts, children’s areas and more. Artesian Water Company would provide water; Sussex County would provide sewer service; and a pump station would be located on the south parcel.

(Originally, the developers had requested a conditional-use permit to build multi-family units in the north, but the P&Z Office said that request had been abandoned.)

The public can read just about the entire file on the proposed project. Nearly 600 pages of maps, environmental reports, state feedback and public comments have been posted online.

• A detailed P&Z packet is online at https://sussexcountyde.gov/planning-zoning-commission (click “Agendas and Minutes” and then the Jan. 9 “Packet”)

• Information on Old Mill Landing South is at https://sussexcountyde.gov/LandUseApplications/s-2019-2

• Information on Old Mill Landing North is at https://sussexcountyde.gov/LandUseApplications/s-2019-13.

This is just one of many topics for the Jan. 9 P&Z meeting. As currently listed, Old Mill Landing is in the middle of the commission’s 17 agenda items for that meeting, also including: Keastone Bay’s proposed subdivision of 675 lots behind Baywood Greens in Millsboro; a conditional-use request for 224 multi-family units behind WalMart in Rehoboth Beach; and a public hearing on a memorandum of understanding between Sussex County and DelDOT that will detail their coordination process for land use applications.