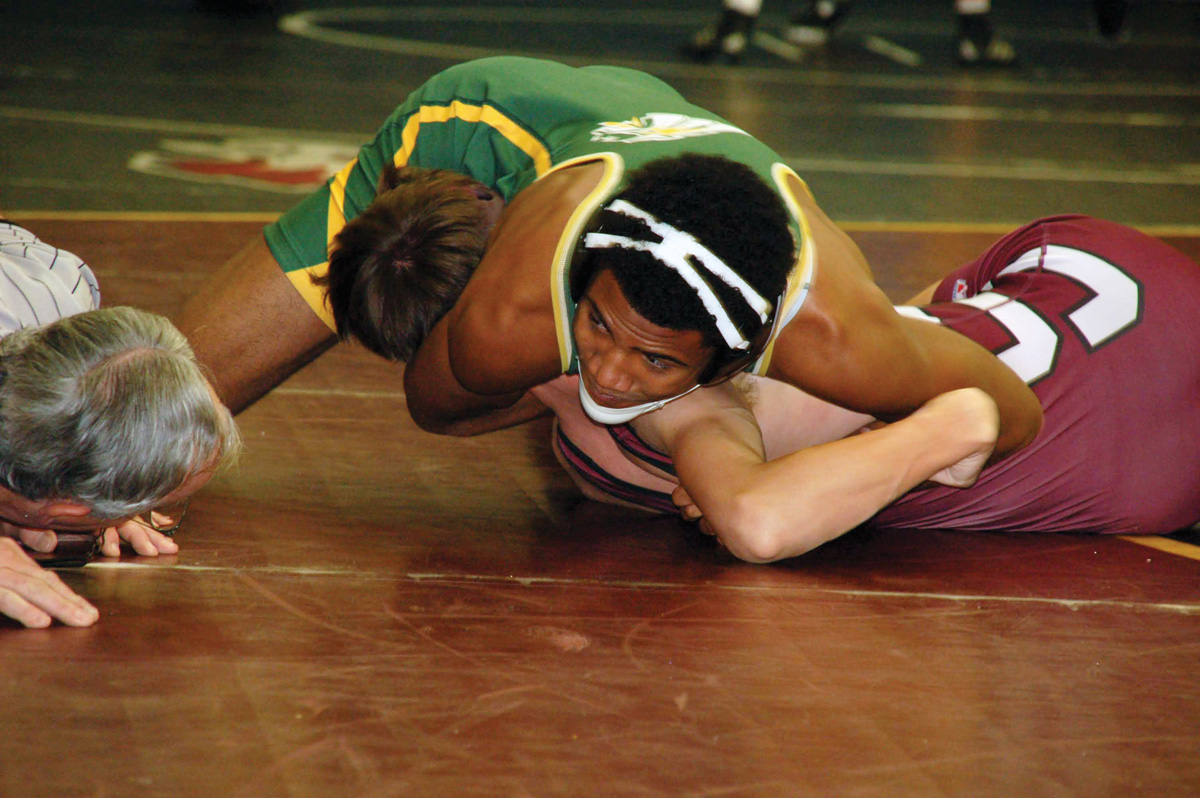 In their final tournament appearance of the regular season, the Indian River High School wrestling team ventured over to Maryland’s Hammond High School to take part in the Hammond Team Invitational last weekend.

T.J. Burke and Ramond Turner both went perfect in their respective brackets to win gold medals. In the process of his unblemished run, Turner picked up his 100th career win while donning the green and gold.

“Ramond went 8-0 on the way to the title at 285,” longtime IR coach Jeff Windish said of his senior’s performance. “He logged his 100th win against Prince Monlandjo on Friday night,” he noted of the Fairmont Heights, Md., competitor. “This is definitely a milestone for Ramond, and we are very happy for him.”

During his 5-0 run in the preliminary rounds, Turner posted two pins, a pair of forfeits and a decision. In the quarterfinals, Turner picked up a forfeit to advance to the semifinals, where he would get a second-period pin over Francis Scott Key’s Dustin Burgett. He added a 3-1 decision in the championship final over Arundel’s Nate Kloss for the title.

Burke had gone 5-0 in the preliminary qualification matches with two pins, a pair of forfeits and a decision. In the championship rounds, Burke scored a 5-2 decision over Chesapeake-AA’s Zak Hardin, 5-2, before edging Francis Scott Key’s Wyatt Johns, 3-2.

Burke decked Hutchinson with just 20 seconds left in the final period, for the gold.

As a team, the Indians placed seventh overall. In addition to Burke’s and Turner’s performances, IR got solid efforts from Ian Shaubach, Ta’Jon Knight, Cristian Galindo-Lopez and Jose Perez.

Shaubach went 6-2 for the weekend in the 120-pound bracket, while bringing home a third-place medal. Knight added a 6-1 showing in the 132-pound bracket, having had to bow out in the semifinals due to injury. He would finish fourth overall.

Galindo-Lopez (113 pounds) and Perez (195) each finished fifth in their respective brackets. Galindo-Lopez finished 4-4 overall, while Perez was 6-2.

“Cristian and Jose both finished fifth, and gathered valuable team points in the consolation rounds,” said Windish. “This tournament had some very good teams in the field, and we placed six kids in the top six, so we definitely had some bright spots this weekend.

“As a coaching staff, we still feel that we have areas where we need to improve. In tournaments, every point counts, and we need to turn decisions into major decisions, and technical falls into falls. When we can start doing this across the lineup, we’ll move up the leader board.”

The Indians were set to be back in dual-meet action on Wednesday, Jan. 15, (after Coastal Point press time) when they traveled to Delmar for a Henlopen Athletic Conference South Division showdown with the Wildcats. It was just Delmar’s second dual meet having participated in five tournaments so far in their season. They dropped their first dual against Woodbridge back on Jan. 8 by a score of 51-25.

The Indians continued their unbeaten run through the dual-meet portion of their season, racking up a 49-27 decision over Seaford on Wednesday, Jan. 8, to put their record at 3-0 overall in those matches.

Galindo-Lopez, Wesley Brockson, Jalen Holland-Holloway and Turner all got maximum points for the Indians in their individual matches, thanks to pins.

IR’s Chris Saylor put on a clinic with a 14-5 major decision in his match at 126 pounds, while Gerson Sanchez-Velasquez outworked his opponent in their 182-pound contest for a 5-2 decision

Shaubach, Knight and Aaron King had easy nights as they each picked up wins by way of forfeit for IR.

Knight’s win was monumental in that it made him the all-time winningest wrestler in the school’s history. He didn’t even have to break a sweat to do it, as Seaford forfeited the match to him.

“Ta’Jon became the all-time wins leader on Wednesday,” Windish said of his senior’s 134th win on Jan. 8. “He surpassed the previous record holder Zeke Marcozzi,” who had 133 wins, “to move to the top of the leader board.

The match against Seaford, Windish said, “was an important match in terms of moving closer to the Southern Division title, and the kids did a good job of securing the win. Cristian Galindo-Lopez and Chris Saylor got us started down low, and we picked up a key win at 138 with Wesley Brockson.

“There were a few matches that we were winning early, and lost in the third period. These are matches that we have to lock down if we are in a close dual meet. We’ll take some time to clean-up technique to make sure we don’t lose leads in a tight match.”