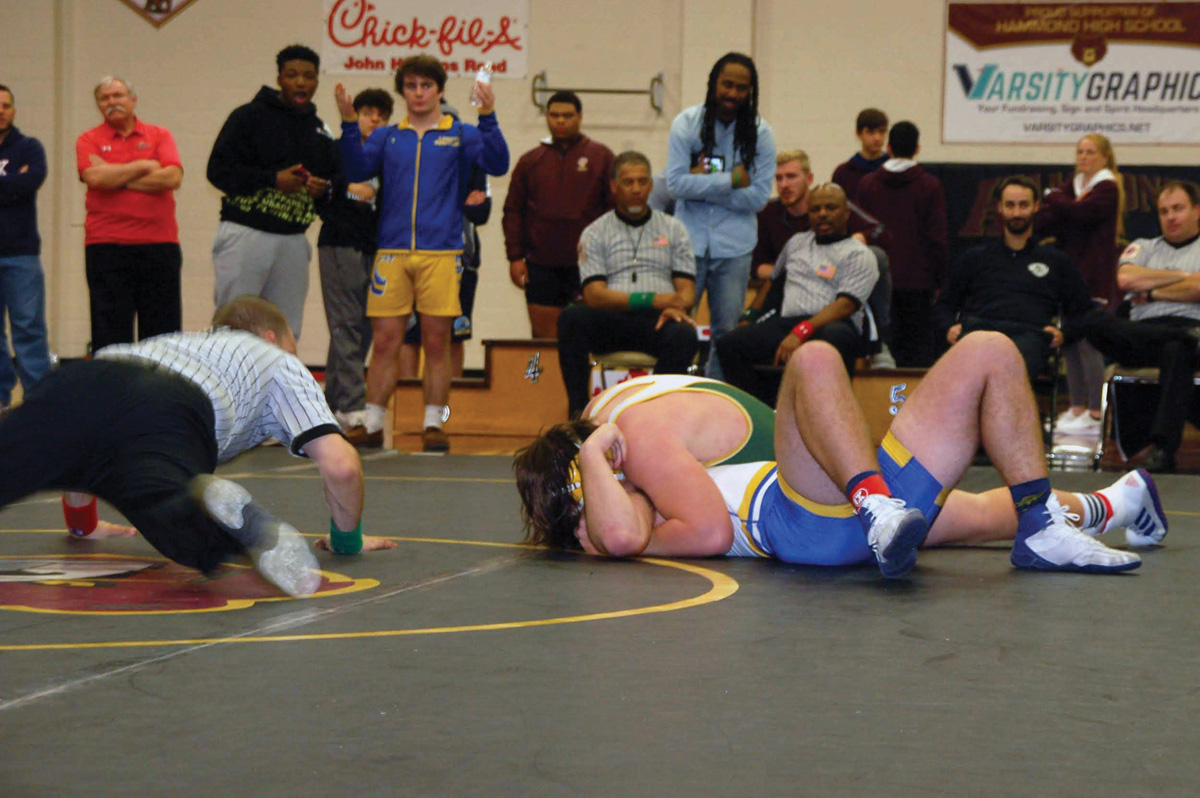 Indians stay perfect on the season

The Indian River High School wrestling team has been flexing their talented roster’s muscles during the course of their dual meets thus far this season. They did it again on Wednesday, Jan. 15, and Friday, Jan. 17, when they overpowered host Delmar, 49-18, and Newark Charter, 39-28, to run their season record to 5-0.

“With our wins over Delmar and Newark Charter this week, we improved to 5-0, and have shown steady improvement across the weight classes,” veteran head coach Jeff Windish said of his team’s impressive performances.

“As a coaching staff, we keep preaching to the kids that we need to take it one match at a time, and never overlook an opponent. The kids are responding well to the challenging schedule that we put together. They realize that every match is important, and that they can’t have an off night.”

Against Delmar, the Indians won their first six matches — five pins and a decision — to take a 33-0 lead and get things off to a hot start.

Freshman Ryan Bunting picked up a pin in his 106-pound match in 4:42. Senior Cristian Galindo-Lopez followed with a quick slap of the mat in 1:33 at 113 for the Indians.

Following a double-forfeit by both teams at 120, IR’s Ian Shaubach got the pin parade going again, getting the win in 1:23 in his 126-pound contest. Ta’Jon Knight followed with a pin of his own in just 40 seconds. Wesley Brockson outlasted his opponent for a 12-11 decision, and River Vickers capped the four-match run with a pin in 1:55 of the first period.

Delmar would win the next four matches to cut into the Indians’ lead, but a pair of forfeits to Jose Utrera-Perez (195) and T.J. Burke (220) righted the ship. Ramond Turner finished the night with a 9-0 major decision for the final margin of victory.

In the win over Newark Charter, Shaubach got things going at 126 — following a double-forfeit to open the match at 120 — with a pin. After a Newark major decision made it 6-4, Knight got a three-match win streak for the Indians going at 138 with his pin. Brockson posted a 7-5 decision next, and Jalen Holland-Holloway added his own decision, 11-7, into the mix.

Senior Will Keller picked up a pin at 170 that put the Indians back up by a score of 24-10. A pair of pins for Newark Charter cut the lead to 24-22, but that would be the closest the hosts would get the rest of the way.

Burke rolled up a 10-5 decision at 220, and Turner got the easy forfeit win at 285 to lock up the win for IR. Galindo-Lopez capped the match with a pin for the Indians at 113.

“Our lightweights helped us get out to a nice lead against Newark Charter,” Windish added. “Ian Shaubach and Ta’Jon Knight provided falls to set the tone for the match. Wesley Brockson picked up a nice win by decision to keep things going in the middle of our lineup. Will Keller made a statement in his return to the lineup with a first-period fall. We will get a nice test against Laurel, who have rattled off seven straight wins.”

IR was set to host Laurel on Wednesday, Jan. 22, (after Coastal Point press time), in a Henlopen Conference South Division clash. The Bulldogs went into the match having lost six of their last seven dual meets.

The Indians took nine members of their JV squad to the Andy Schiuple Tournament at Queen Anne’s County (Md.) High School last weekend. The collective group returned with five place-finishers amongst them.

Freshmen Ryan Bunting and Bryce Rickabaugh, as well as junior Arturo Cruz-Bonilla, each came out of the tournament with second-place finishes. Junior Oliver Velasquez-Rodriguez and freshman Rameir Turner both placed fourth in their respective brackets.

“This was an excellent opportunity for our JV wrestlers to get valuable mat time, and we were really impressed with how they performed,” Windish commented about his group. “Bryce and Arturo each came away with second-place finishes, and wrestled really well on the day. Ryan’s second-place came by way of four pins on the day.”