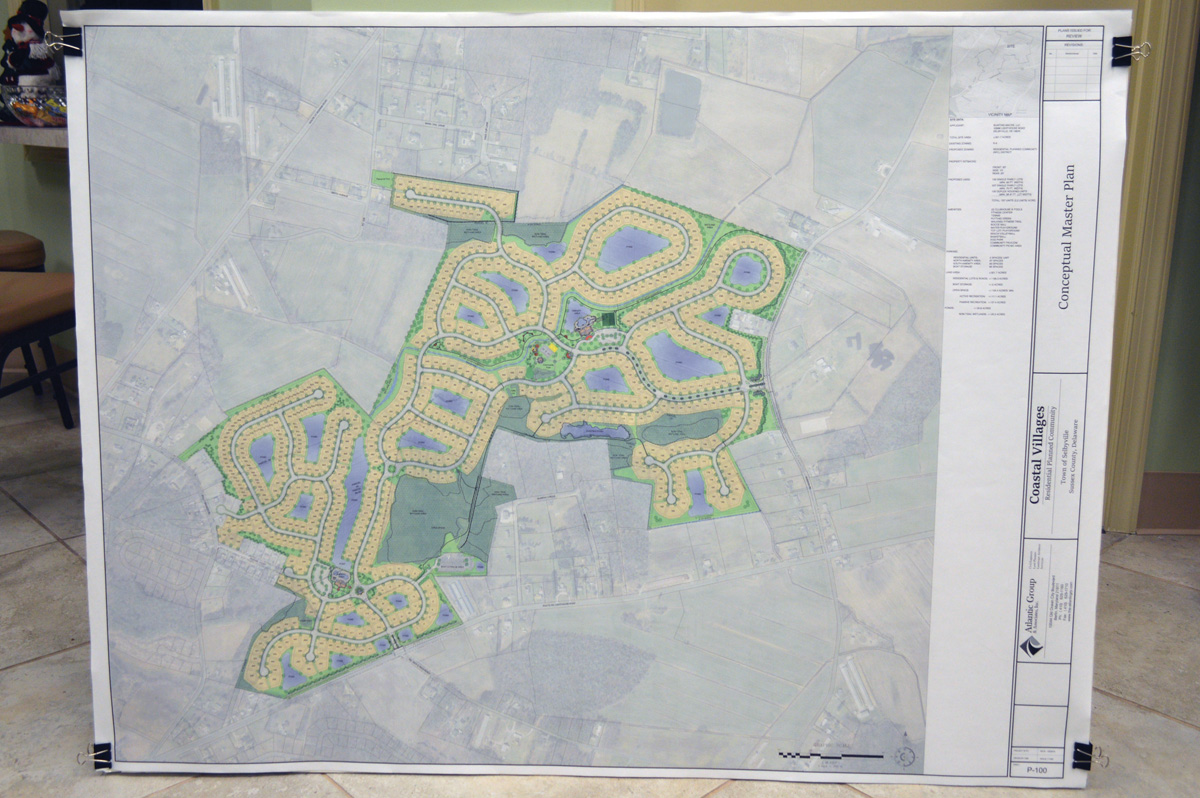 Selbyville is ramping up toward construction of what will be one of the biggest housing developments within town limits. But the size of the community has some people looking twice.

On Jan. 6, the town council approved the preliminary site plan for Coastal Villages, which includes 700 housing units on 322 acres. It would be located on the north side of Route 54, stretched between both Polly Branch Road and Hudson Road.

In June, the town council had approved the concept of this 700-unit community. Although developer Bunting-Macks LLC has requested several deviations from the town zoning code, the overall density would remain at the allowable 2.2 units per acre.

“I won’t say growth doesn’t have some pains to it — it always does,” said Councilman Jay Murray, but he said he sees a nice neighborhood as attracting more business and increasing the town’s tax base.

“They’ve been in here with preliminary plans several times in the last year,” said Councilman Clarence “Bud” Tingle Jr. “It’s a lot of houses, I agree. It’s going to jam up the roads, but it meets all the requirements for the Town.”

The neighborhood would generate over 6,200 daily vehicle trips at peak season, according to their 2018 state PLUS application. That would dramatically increase the town’s housing stock (988 units as of 2016, according to the draft 2020 Comprehensive Plan).

“I think it’s absurd,” said resident Dawn Thompson after the vote. “I think the prospect of a development that large… It’ll bring more people in, you get more tax revenue. I worked for the utility company [in Baltimore], so I understand something about infrastructure and what it takes to get infrastructure going … but you’re already scrambling because you can’t provide schooling for what’s already here.”

With the potential traffic congestion, “It’ll be another Rehoboth, because you just sit there [in traffic]. You have a beach house, but you don’t go to that beach,” she added.

“I don’t see them having a long-term vision about what this is going to bring to the residents of the town,” Thompson said. “When you’ve got that many people, and whether they’re summer homes or year-round homes, you’re going to see that increase in traffic … all year ’round.”

Coastal Villages has an expected 10- to 15-year build-out timeline. Council members complimented the overall design of the community, including the amenities and variety of housing options, from starter homes to more moderate-priced houses. The project would also include 100 duplexes, which would be less expensive than regular single-family houses.

“It’d be nice if our kids could afford to live here, on the east side of [Route] 113, not have to move to Gumboro,” developer Coleman Bunting said at the Dec. 11 P&Z meeting, and others agreed.

“There’s going to be a lot more of these coming,” Councilman Rick Duncan Sr. had answered.

Afterward, Jay Murray confirmed that he is a business partner of Coleman Bunting, though he is not involved in the Coastal Villages partnership. Bunting is the land developer and might build some of the houses, Murray said.

“I got no part of it — none,” Murray said. “He’s my partner in Bunting & Murray Construction. I’m not in development. I’m not part of that development — the ownership.”

So, if the two men do business elsewhere, is it appropriate that Murray participates in town votes on Bunting’s developments?

“I’m not a partner in the development, so in my eyes — yes,” Murray said.

Some of those at the meeting said they felt rather blindsided by this vote, since discussion only lasted several minutes and the developer did not attend the meeting to present the plan to the council.

However, this project has come before council sporadically in the past. The Town annexed 10 acres into the town in October 2018, understanding that it would pave the way for the 695-unit project. At the time, the P&Z had seen a concept plan.

“In addition to multiple Planning Commission meetings, the mayor and council have seen this plan when it was presented to them back in June [of 2019],” said Town Administrator Stacey Long. “Since then, a few minor changes to the plan have occurred. The approval was preliminary only. This is to allow them to move forward with the final design of the project.”

Before construction can even begin, the developers must obtain various other state and county permits. The final site plan must be publicly approved by the P&Z Commission and by the town council. The developer will make a public presentation on the final plan.

Selbyville’s Town Council agendas can seem vague regarding P&Z issues. For instance, the council agenda will say “Review of P&Z meeting from Dec. 11,” but it doesn’t indicate that council might be voting on either a small lot-line adjustment or a 700-home development.

The Delaware Attorney General’s Office has emphasized that “the primary purpose of an agenda notice is to alert the public to important matters that will be discussed and possibly voted on so that members of the public can decide whether to attend a particular public meeting.”

Pride in your fluoride

The Selbyville Water Department earned a Water Fluoridation Quality Award for 2018. The Centers for Disease Control and Prevention congratulated the water system operators for safe and consistent addition of fluoride for oral health.

“The CDC recognizes water fluoridation is one of the 10 great public health achievements of the 20th century,” wrote Nicholas R. Conte Jr. of Delaware Health & Social Services. “Fluoridation is an important step toward strengthening our efforts to prevent and control tooth decay in both children and adults. Your consistent maintenance of water fluoridated at optimal levels improves and protects the oral health and overall wellness of Delaware residents.

“Fluoride is simply one of the toughest things we introduce. … The guys watch it very close,” said Duncan, adding that he was very proud of the Town’s water department staff. It’s a very precise measurement, he said: too little fluoride is useless, and too much can cause blotching or eating away of the teeth.

According to Duncan, a 1960s Selbyville mayor was also a dentist who first introduced the (now-mandatory) program to Selbyville.

In other Selbyville town news:

• The police department is staffed at nine full-time officers, plus four part-timers. They are not hiring right now.

• Recycling fees have increased this year. The Town has been covering the difference until now, but they will likely raise rates by 80 cents per month.

The Planning & Zoning Commission’s next meeting will be Wednesday, Jan. 29, at 4 p.m. The agenda includes Salt Water Landing final plan approval; a conditional-use request for a church at 48 N. Main Street; and review of DelDOT PLUS comments for a proposed subdivision on Polly Branch Road, including waiver of a traffic improvement study and traffic operations analysis.

The council’s next regular meeting will be Monday, Feb. 3, at 7 p.m., starting with a public hearing on the subject of the 10-year update to the Town’s comprehensive plan.