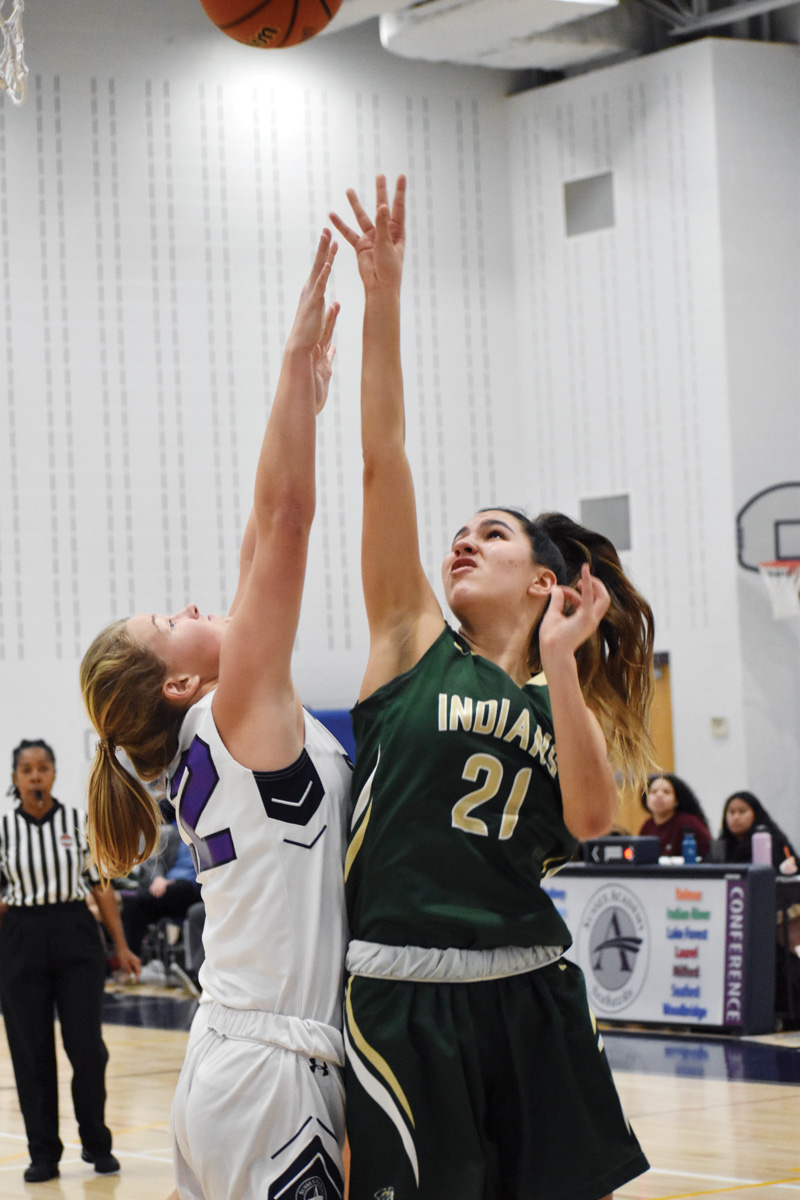 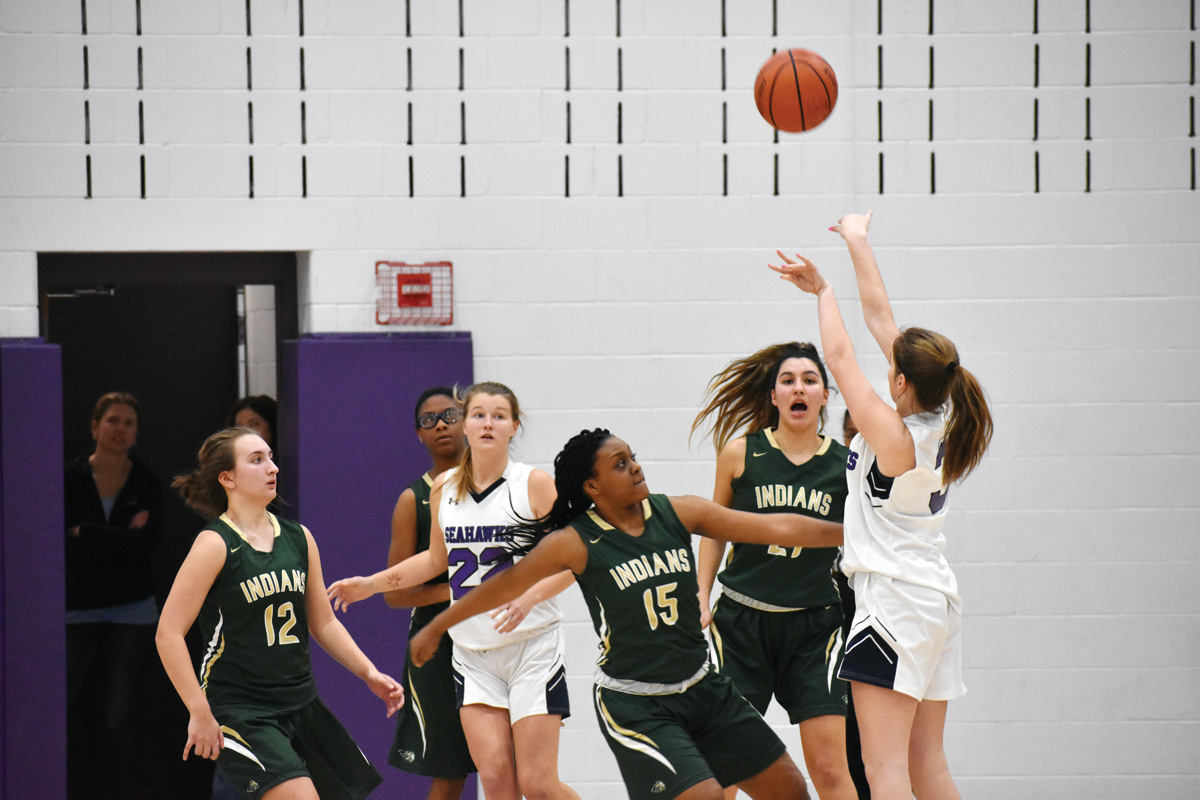 Clean sweep on the hardwoods

Indians trio of hoops squads all pick up wins

It was a day and night of hoops on Tuesday, Jan. 28, for the three Indian River High School basketball teams. The squads each picked up a win in their games.

The Unified team got things going with a 32-30 win over Milford in the afternoon. The girls followed in the evening, holding on for a 27-22 victory over Sussex Academy. Then the boys capped the night with a 61-37 shellacking of the Seahawks.

The Indians have run their record to 2-0 following the win over the Buccaneers, thanks to a 15-point effort from Joseph Snyder. The junior scored almost half of the Indians’ points in the game with Gabe “Big Shot” Mouynivong and R.J. Rybicki each adding five. Ryan Stone chipped in with three, and A.J. Bordeaux and T.J. Moore rounded out the scoring with two each.

It was a long two-week break between games for the Indians, but head coach Steve Kilby noted that the team utilized that time to have good practices to prepare for the game.

“Joe Snyder came up huge for us, battling under the boards for rebounds and put-backs, and playing tough D at the other end of the floor against a very good Milford team,” head coach Steve Kilby said of the defensive play.

“The team was down 28-14 halfway through the third quarter, and Coach Hudson and I told the them that we needed stops, and needed to start rebounding under our basket, and put the ball back up immediately. This group of athletes was so thrilled with their win. It was all smiles coming off the court.”

The Indians tied things up with about 15 seconds left in the game and were able to steal the ball back with 10 seconds remaining, getting a timeout in the process. They were able to set up a play for Rybicki to spin off the IR line at mid-court and took a perfect pass from Stone for a layup. IR was able to force Milford into errant shots that could have tied the game, to hold on for the win.

IR was heading back in action on Thursday, Jan. 30, against defending DIAA state champion Caesar Rodney. The game is a rematch from last year’s state semifinals game. Results from the game (played after Coastal Point press time) can be found on the Coastal Point sports Facebook page once they are available.

In the girls’ game against the Seahawks, the Indians jumped out of the gate to a 13-5 lead after the first quarter, thanks to a balanced attack from Yanya Wise, Lauren Meehan, Emma Jenne and Micayla Meehan.

However, that hot start somehow turned ice cold in the second, and it allowed the Seahawks to get back into the game, thanks to a scoreless quarter from IR. Heading into the halftime intermission hanging on to a 13-9 advantage, the Indians staved off another rally from Sussex Academy as the hosts trimmed the lead to 19-17 heading into the final eight minutes.

“We are still very young and are learning every timeout,” veteran head coach Pat McCrea said after the game. “The girls are starting to understand and think the game of basketball so that when I tell them things, they are understanding them more. It’s been a process.”

The Indians were able to utilize some of those lessons from their coach to close out the fourth quarter and win the game, thanks to an 8-5 final run. The Meehan sisters accounted for all eight of the IR points in the quarter.

The Indians certainly could have given themselves a little more breathing room if they had been able to convert more from the charity stripe, as they were only able to connect on 5 of 13 in the game.

Lauren Meehan was the most consistent from the line, knocking down four of her five tries as part of her team-high eight points in the game. Wise chipped in with six, as did Micayla Meehan. Emma Jenne added five points, with Le’Anya Garrison scoring two to round out the IR scoring output.

“We’ve won three straight now, and four of our last five,” continued McCrea. “We are taking steps in the right direction. The girls continue to work hard and have been a pleasure to coach. I am looking forward to their continued growth.”

It’s no secret that the Indians’ boys’ basketball team has been struggling for a great deal of their season. With many new faces, including their first-year head coach Devin Mann, the Indians have had their fair share of lumps, bumps and growing pains. The lumps and bumps could also be symbolic of the injuries and illnesses they’ve had to deal with as of late.

However, all those setbacks — 10 in a row overall — are now being used as learning experiences.

The Indians sprinted out to a 14-5 lead after the first quarter but found themselves trailing 19-18 at the halftime break. IR didn’t allow their second-quarter effort to carry over into the second half as they responded with a 20-8 advantage to take control of the game at 38-27.

They would put the game away with another convincing offensive performance in the fourth outscoring their guests 23-10 for the final margin of victory.

The night, “I felt, was big for our confidence,” Mann said after the game, “in particular, the second half. We were able to string together some stops and get our offense going, specifically in the fourth quarter, when we opened up [the lead] from 10 to 30 at one point. Gage Spinks got locked in after a rough first half and gave us instant offense. His 24 in the second half gave us a comfortable cushion.

“Despite many mistakes, we were able to finish a game, and that should give us confidence going into these next few games.”

Spinks carried the Indians with his game- and career-high 29 points. The junior knocked down four shots from beyond the arc, while adding a 7-for-9 effort from the foul line. Sophomore Carson Barnes added nine points, with freshman Andrew Burns chipping in with six — thanks to a pair of three-balls. Ja’siah Rounds and Qui’maine Jacobs each contributed four points for the winners.

Riley Custudio led the Seahawks with 10 points, with six of those coming from the charity stripe. Fadens Amisial added nine points.

The win was the first for IR since a 66-43 decision over Worcester Prep back on Dec. 7, at the Delmarva Christian Tip-Off Classic tournament.

The Indians will travel to Lake Forest on Friday, Jan. 31, in a rematch of their earlier contest from Jan. 9, when the Indians fell 71-49 to the Spartans. They will then host Stephen Decatur on Tuesday, Feb. 4, as part of a doubleheader with the girls.