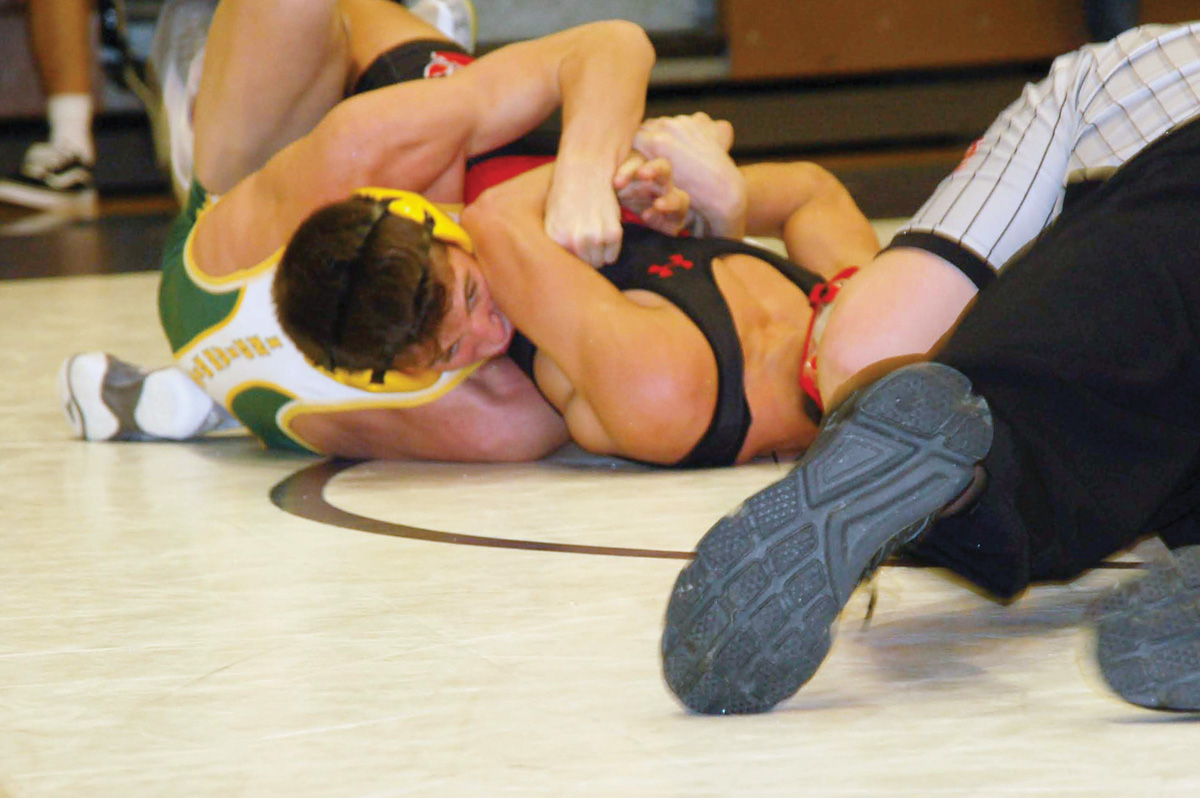 Indians have impressive week on the mats

With just a couple of weeks left in the season, the Indian River High School wrestling team has been locked in and focused, with their eye on the postseason prizes that await them. Last week, the local grapplers rolled up four non-conference wins in five contested duals overall, with solid performances up and down the lineup.

Four different Indians were a perfect 5-0 over the course of two days of action. Cristian Galindo-Lopez, Ian Shaubach, Ta’Jon Knight and Ramond Turner all went unbeaten, with T.J. Burke right behind at 4-0.

The Indians started off their two-day road trip with a 40-35 win over Hodgson. IR found itself in several holes throughout the match, including 29-22 toward the latter stages of the contest, but the team was able to string together a four-win run sparked by a Cristian Galindo-Lopez pin at 120 pounds to take its first lead since the very beginning of the event. Ian Shaubach followed with an 8-4 decision at 126 pounds for the 31-29 lead the Indians would never relinquish.

“Although we did not perform to the best of our ability, we pulled out an important non-conference win against Hodgson,” IR head coach Jeff Windish said of his team’s performance. “Ian bumped up a weight class to take on state-ranked Trey Crawford, and dominated the match on the way to a win. Jalen [Holland-Holloway] had an important major decision to start the match. Cristian, Ta’Jo and Ramond came away with falls on the night, racking up valuable bonus points.”

In the Cougar Duals, hosted by Martin Luther King High School in Philadelphia, the Indians came away with a second-place finish, having come up short in the finals versus Academy Park, 45-33.

IR opened the duals tournament with a rout of the host MLK Cougars, 63-15. Bunting, Galindo-Lopez and Shaubach got the Indians out to an 18-0 lead through the first three matches, then three more pins, by Knight, Bryce Rickabaugh and River Vickers, made it 36-3.

It was pretty much over from there.

Cole Windish (160 pounds) posted a 10-9 decision, Will Keller pinned at 170, and Gerson Sanchez-Velasquez, Burke and Turner each were awarded forfeits to finish off the beatdown.

The Indians then took their quarterfinals match against Pottstown, Pa., as they more than doubled the score of the Trojans, 58-24.

Three straight wins opened the match for IR, with Connor Whitlock, Galindo-Lopez and Shaubach getting the Indians out to an 18-0 lead. Knight, Keller, Burke and Turner all won their matches by pin, while Aaron King and Bunting added forfeits. Jalen Holland-Holloway posted a 13-4 major decision for IR’s other individual win.

“We were very pleased with our performance this weekend,” continued coach Windish. “The kids wrestled well and came home with a second-place finish. It is definitely nice to get out-of-state and see some new teams, and I think the kids responded well to traveling and the challenges of seeing good teams from other states.”

In the semifinals, the Indians went back-and-forth with Springfield Township of Pennsylvania before Galindo-Lopez gave IR the win with a 27-second pin in the finale at 113 pounds.

Shaubach, Knight, Vickers and Burke also pinned their way to wins. Turner didn’t even break a sweat with a forfeit, and Holland-Holloway added a major decision (17-5) to round out the successful showing for the Indians.

In the finals against perennial Pennsylvania power Academy Park, the Indians couldn’t overcome an early deficit, despite a valiant effort over the final five matches, falling to the Knights 45-33.

AP proved to be very tough, winning eight of the first nine matches — seven of them by pin — to take an insurmountable 45-6 advantage. The lone IR points came from a Ta’Jon Knight pin at 132 in 47-seconds.

The Indians didn’t go down without a fight, however. Burke worked his way to a 4-1 decision, then Turner, Galindo-Lopez and Shaubach each pinned their ways to wins, with Bunting adding a forfeit in the mix.

The pin in the day’s final match was the 100th career victory for Shaubach, allowing him to accomplish a rare milestone for the IR program.

“We were able to get some new faces into the lineup last weekend,” Windish concluded. “Bryce [Rickabaugh], Oliver Velasquez-Rodriguez, Arturo [Cruz] and Rameir Turner all got valuable varsity experience over the course of the weekend. Rickabaugh recorded his first varsity win with a fall over Ziare Brooks of MLK in 55 seconds. River [Vickers] had a good weekend, recording two falls on Saturday as well. His pin against Springfield Township was crucial and helped seal the victory.”

Bunting wrapped up the five-match stretch with a 4-1 record. Holland-Holloway (3-2) and King (2-1) also posted winning records.

The Indians — now 11-3 overall — will wrap up their regular-season schedule with their final home dual on Friday, Feb. 7, against Sussex Central at 4:30 p.m.