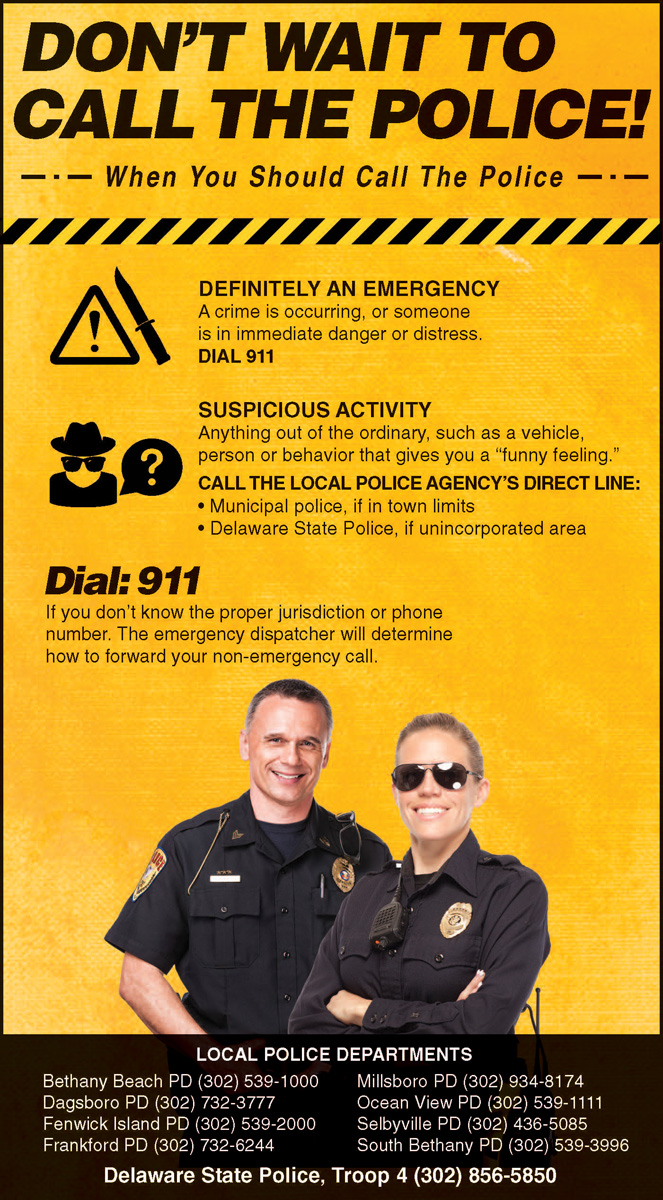 A suspicious car on the street. A possible theft. A person angrily waving a gun from a nearby car.

Those are details to tell police immediately — not two days later, and definitely not via Facebook, police emphasized recently.

“I would encourage people to call 911 with those incidents, rather than posting photos on Facebook,” said Selbyville Police Chief W. Scott Collins, who described a Route 54 tailgating/road-rage incident involving a gun. “It was actually on Facebook before they called 911.”

“It began as a road-rage incident, with the subject exchanging words and hand gestures,” according to Collins. “The victim followed the subject for some time, during which the suspect … displayed a handgun. The victim continued to follow the subject and called 911 after seeing the subject pull into a residence.”

But before calling police, the victim posted a photo of the offending vehicle to social media.

“The victim takes a picture of the car, posts it on Facebook, and then takes off and follows them,” Collins said.

“I certainly encourage people to call, whether it’s 911 or the station line,” Collins said. (The Selbyville police station direct line is (302) 436-5085.) “If you call us when it happens … it gives us a fighting chance.”

Some folks are posting complaints to their social media page without ever calling the police.

“We’re actually seeing this a lot. We’re being notified of complaints because people saw it on Facebook. ‘I heard on Facebook that this happened,’” Collins said.

“All I can tell them is it hasn’t been reported to us,” he continued. “The people never even reported the crimes a lot of the time. They didn’t want to report it, they just wanted people to know about it.”

For instance, a person might notice a suspicious vehicle parked nearby, but not report it.

“Next thing you know, you have 12 people saying, ‘I had something stolen,’” Collins said. “If one person had made that call and reported that suspicious vehicle, we could have cleared it that night.”

Once, a resident complained about having witnessed a potential drug deal near his or her house. They informed Collins of the incident several days later.

“What am I supposed to do about it? It happened two days ago,” Collins later said. “I don’t know what they look like, I don’t know where they went.”

For those people who see something odd but don’t believe it’s police-worthy: “I would always have them side with caution. Give us a call. If it’s nothing, it’s fine. It could be one — color of vehicle, type of vehicle or time of day — that could be the one that that helps us solve something or prevent something.”

“If you see something, and you question it — by all means, call 911,” said Thomas. “We have a predetermined set of questions that we are going to go through. … Based on the answers, that will determine” if a dispatcher will send police to investigate.

The Delaware State Police would agree. They recently cracked a case because one man had jotted down the license plate number of a suspicious vehicle parked near his vacationing neighbor’s house.

The trail could run cold if police aren’t notified immediately — and notified properly, that is. People sometimes send Collins private Facebook messages when they ought to call the police station.

“I’m not a big Facebook guy. Every now and then, I don’t get notification. … A lot of times, it’s hours later or the next day,” Collins said.

“We actually cleared a burglary because the neighbor had video,” which he provided because he read about the crime on Facebook, Collins noted. But in that case, the victim hadn’t told the police. It wasn’t reported until after the neighbor’s video was found.

“Just getting to people to report things when it happens” is the most basic start to any investigation, Collins said.

In the road-rage incident, several police agencies helped to respond. William Hudson, 29, of Selbyville was arrested in the incident, on three charges: aggravated menacing/assault (a felony), possession of a firearm (a felony) and disorderly conduct (a misdemeanor).