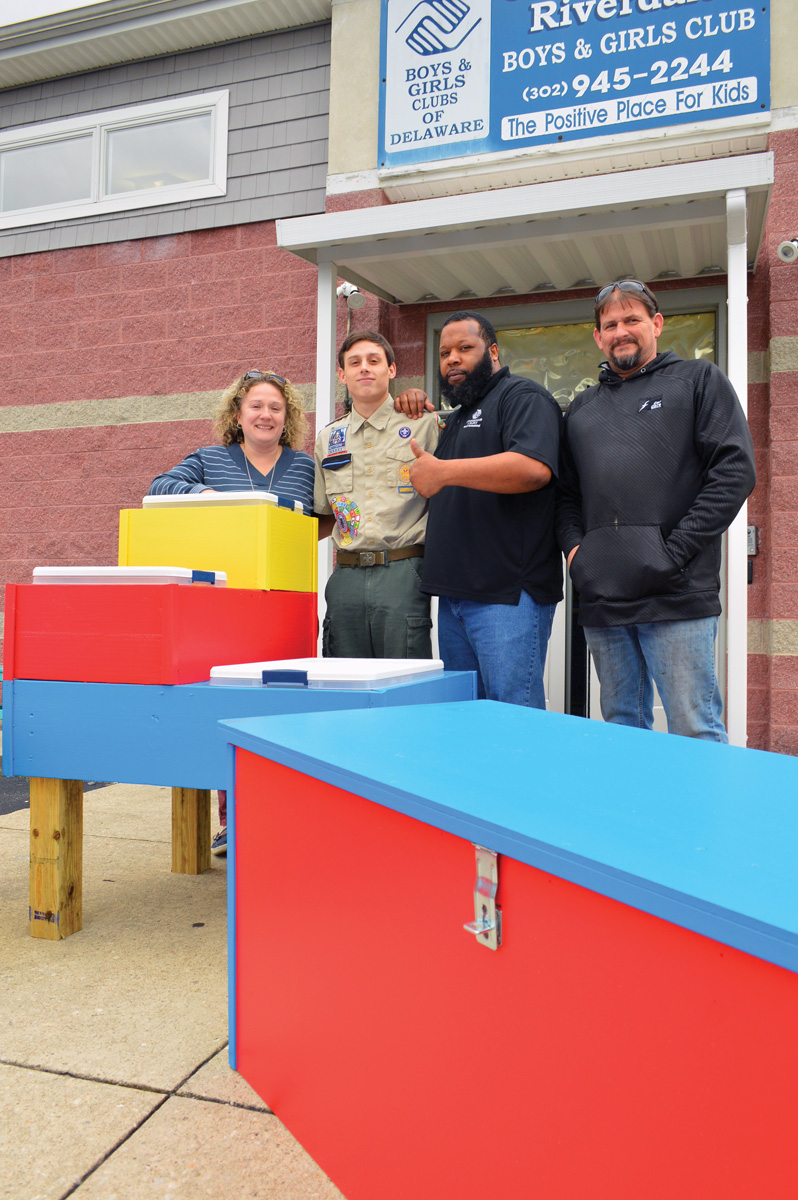 Visiting the Oak Orchard Boys & Girls Club last month was like coming home for Dalton Wayne, just three days away from his 18th birthday. Having spent many childhood days there, Wayne planned his Eagle Scout service project to benefit the group.

Becoming an Eagle Scout is one of the top scouting achievements and a significant milestone for young people, which must be completed by their 18th birthday.

“It was never just a thing to have. The trail to Eagle is more important than the rank itself,” Wayne said.

The Eagle process includes a community service project, as well as the application, an in-person board interview, reference letters, physical fitness and the required badges. Eagle candidates are expected to show positive change, both inside and out.

For his project, Wayne built four wooden containers to replace critically aging equipment at the Boys & Girls Club. The first three are outdoor storage lockers for gym equipment and toys. The fourth item is a sensory table targeted toward special education, but which is popular with all students. It will be filled with water and sand, serving as a tactile calming technique for children.

More than 100 kids attend the club’s regular care program, plus about 18 children at the early-childhood center.

Living in Millsboro, Wayne started attending the Boys & Girls Club as a young child and continued volunteering as a middle-schooler, even after aging out of the regular program.

“I was brought up here,” as were his other siblings, he said. Wayne said he thinks he would have built the project even without the Eagle aspiration. “This place has given so much to me and my family, for me not to give back…

“It was a place where I could get homework done and actually enjoy meeting people. And it relieved the stress on my dad at home,” he said. “And it was just a place where a kid could be a kid. A place that actually wanted to see me grow.”

The staff said they were grateful and impressed with his maturity through the process.

“We’re proud that he came in and took the initiative,” said Oak Orchard Boys & Girls Club Director Ericka Kennedy “It makes us proud seeing him come back and still want to do service jobs here. I think that’s huge.”

Wayne said he was partly inspired by an older brother, who also built storage containers for his Eagle project.

He took care with the details, sanding the sharp edges into rounded corners and painting the pieces to match other Boys & Girls Club equipment.

They probably applied a half-dozen layers of paint to each piece, joked his dad, Chuck Wayne,

Wayne said he hopes to enlist in the armed services after graduating from Sussex Central High School this spring. If all goes according to plan, he will be awarded the Eagle rank this spring, too. He currently holds a Life rank. He joined Cub Scouts around age 6, starting as a Tiger.

“It’s been one of my favorite things coming up. It was just always good time, and there was stuff to learn to bring forward to my outside life,” he said.

Wayne said he has enjoyed the past year with Troop 281 in Ocean View, where he was elected senior patrol leader and is now helping a younger protégé assume that role. He said he was grateful for his troopmates, who arrived on short notice to help with construction on his project. Wayne also offered a “big thank-you” to the individuals who donated money for construction materials.