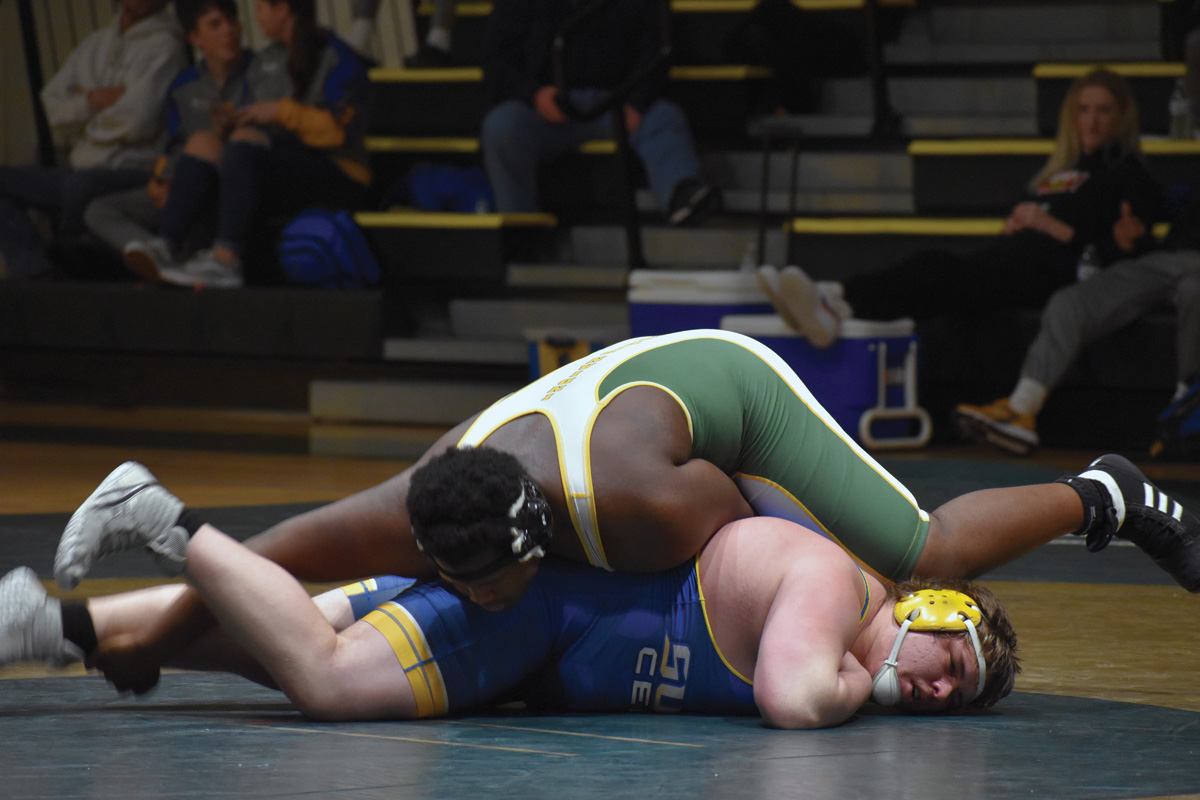 It has been a solid dual-meet season for the Indian River High School wrestling program as they wrapped things up, splitting a pair of dates with Wilmington Charter School and Sussex Central last week. IR hammered Charter, 64-8, then found themselves on the short end of a 42-30 decision to the Golden Knights.

Against Central on Friday, Feb. 7, the Indians had jumped out to a 21-5 lead, winning four of the first five bouts.

Freshman Ryan Bunting got things off on the right foot for IR with a come-from-behind pin at 106 pounds against Central’s Kenseth Taylor at the 2:56 mark. Senior Cristian Galindo-Lopez followed with a hard-fought 7-4 decision over Dylan King at 113.

Junior Ian Shaubach and senior Ta’Jon Knight bookended their pins at 120 and 132 against Evan Broomall and Tyler Hudson, respectively, with Knight’s pin coming in 51 seconds.

“As a staff, we were definitely pleased with how the kids performed,” head coach Jeff Windish said of his team’s effort Friday night. “Jumping out to a 21-5 lead was great, and it put the momentum in our favor. However, we knew they were strong in the middle, and we needed to be stingy with bonus points.

“Ryan’s pin at 106 was awesome. This kid is never out of a match and will fight for the entire six minutes. Cristian had a gigantic win at 113, dominating a kid who’s had his number all year long. Ian and Ta’Jon keep pinning everything in sight, and that helps us in tight duals.”

The Golden Knights then went on a five-match tear — including four pins — that turned their 16-point deficit into a 33-21 advantage.

IR’s Will Keller stopped the bleeding momentarily with a pin of his own at 182, getting the slap of the mat at 5:10 in the third period. Back-to-back wins for Central at 195 and 220 put the match away.

Ramond Turner picked up the final points for the Indians as he outlasted Tyler Karr in overtime for a 2-1 decision.

“Keller’s win at 182 righted the ship and gave us a chance to win it at the end,” Windish added. “I don’t think you can ever be happy with a loss, but there were definitely victories within the match.”

The Indians now advance to the DIAA Division II Team Duals state championships, which were held on Wednesday, Feb. 12, (after Coastal Point press time). The Indians earned the No. 5 seed and traveled to No. 4 seed Delaware Military Academy in the quarterfinals. For complete results on the match, check out the Coastal Point sports Facebook page as the results are made available.

“We’ll get another test in the quarterfinals with Delaware Military Academy,” concluded Windish. “If the kids come ready to wrestle, we’ll have a good chance of advancing to the semifinals.”

The Indians were simply dominant on Wednesday, Feb. 5, as they traveled north to Wilmington for a non-conference tilt against Charter School. IR dropped just two individual matches on its way to the 64-8 shellacking that had improved their overall record to 12-3 on the season prior to the match with the Golden Knights.

The Forces forfeited five straight matches in the upper weights, with IR’s Cole Windish, Keller, Gerson Sanchez, Jose Perez and T.J. Burke the benefactors. Galindo-Lopez posted a 16-2 major decision for the Indians, with Knight and Jalen Holland-Holloway both adding decisions to the decisive win.